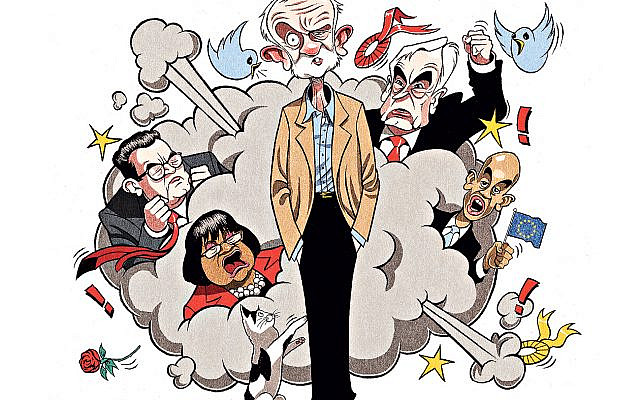 In their recently published and much acclaimed exposé Left Out: The Inside Story of Labour Under Corbyn, journalists Gabriel Pogrund and Patrick Maguire tell a gripping  but at the same time very sad yarn.

Elected as the Labour MP for Islington North in 1983, the privately educated Jeremy Bernard Corbyn spent his entire political life very much left-of-centre, espousing every radical and anti-capitalist cause he could find and never happier than on the backbenches of the House of Commons, opposing whatever he could find to oppose, and (apparently) never for one moment considering the possibility that he might occupy any seat on the front bench.

But in 2014 Labour’s first and to date only Jewish leader, Ed Miliband, had persuaded the party to change the method by which its leader was elected.

Henceforth Labour MPs were to have no greater say in this election than rank-and-file party members. Indeed it was now possible for any person declaring themselves to be a Labour “supporter” to buy party membership for as little as three pounds. Following Labour’s electoral defeat in 2015 Miliband resigned. Under the new system he had blessed, Labour elected Corbyn as its new leader – even though four-fifths (and more) of Labour MPs were opposed to his leadership.

Corbyn assumed the party leadership on 12 September 2015. The Tories, led then by Prime Minister David Cameron, were on the ropes, in office but hardly in power, their collective back about to be well and truly broken on the wheel of Brexit. And when Cameron’s successor, Theresa May, called an election (June 2017) to try to break the Brexit deadlock in her own party, and lost her parliamentary majority in the process, it seemed as if Labour’s time had come.

Never in recent British political history had the omens looked so good for an unabashed Marxist, leading what appeared to be a Marxist-dominated mass Labour party, to be regarded as a serious contender for the occupancy of 10 Downing Street. But when the chance came, in the general election called in December 2019 by the new Tory leader and professional buffoon, Boris Johnson, Labour crashed to defeat. The Tories were returned to power, with an 80 seat majority. On 4 April 2020 Corbyn resigned as Labour leader, to be succeeded by Keir Starmer, who boasts a Jewish wife and whose children are (we are assured) being brought up in the Jewish faith. Corbyn has now retired to the backbenches whence he had come. “The Project” has well and truly failed.

In telling the distressing story of “The Project,” Pogrund and Maguire have relied on on- and off-the-record interviews, media reports and gossip, plenty of gossip. Not only are they very good story-tellers. They have an eye for detail. I was particularly struck by their insistence on identifying precisely the provenance of the alcoholic beverages imbibed by the various dramatis personae at the centre of the tragedy as it unfolded. And the tragedy they recount was nothing less than a brutal civil war – or rather several brutal civil wars – in which Labour masochistically indulged itself in the Corbyn era. Their’s is certainly a compelling narrative.

Anyone telling the story of “The Project” would be failing if they did not devote space – a lot of space – to its Jewish dimensions. Pogrund and Maguire do not disappoint. An entire chapter [“For the many, not the Jew”] addresses the alarums and excursions that accompanied the ultimately successful attempt to persuade Labour’s National Executive Committee to override Corbyn’s personal predilections and endorse in full the definition of antisemitism adopted and promoted by the International Holocaust Remembrance Alliance (incorrectly described at page 105 as  “Association”).

What was at issue here was not so much the definition itself, which is anodyne in the extreme, as the eleven examples that follow it, in particular the admonition not to describe Israel as “a racist endeavour.” Corbyn has a long and demonstrable history of philosemitism [see my articles in the Jewish Telegraph (18 April & 14 June 2019) and the online Spectator (8 May 2019)], but an equally long history of anti-Zionism. In May 1984 he actually chaired a conference of something called “The Labour Movement Campaign for Palestine” that dedicated itself “to eradicate Zionism.”

But more recently he had come – grudgingly perhaps – to accept the existence of Israel as a Jewish state. At a meeting with the then president of the Board of Deputies (barrister Jonathan Arkush) on 9 February 2016 Corbyn was reported – by the Board – to have given “a very solid commitment to the right of Israel to live within secure and recognised boundaries as part of a two state solution to the Israel-Palestine conflict.” I could find no mention of this meeting in Pogrund & Maguire’s narrative.

Scarcely less important in understanding what lay behind the alarums and excursions is the fact that Labour – both the movement and the party – has a very long history of anti-Jewish prejudice, going back to its very foundations in the 1890s and the early years of the 20th century. This prejudice has of course nothing to do with the State of Israel, let alone Zionism, but everything to do with the Marxist view of capitalism and of the origins of capitalism.

The moneyed Anglo-Jewish gentry – the so-called Funding Fathers and their sycophantic camp-followers – that order the affairs of Britain’s Jewish communities did not need to be publicly reminded of this. So the election of Corbyn as Labour leader stirred deep fears. What that gentry also feared was Corbyn’s insistence on meeting and making friends with Jews whom they – the Anglo-Jewish gentry – regarded as beyond the pale.

This fear, too, is of ancient pedigree. It surfaced during the struggle for Jewish emancipation (1830-60), when the London Committee [subsequently Board] of Deputies of British Jews took umbrage at the efforts of idiosyncratic but independent-minded individuals to fight the good fight on their own initiative.   In 1943 the Deputies actually took steps to sabotage a Holocaust rescue effort by Chief Rabbi Hertz’s son-in-law, Dr Solomon Schonfeld, because Schonfeld had had the chutzpah to make contact with the British government directly, and not through the Board! So Corbyn’s dialogues with “fringe” Jews also stirred primeval fears. What might he do if he became Prime Minister?

And so it was that in January 2020 the Board, in an unprecedented intervention in a party leadership contest, demanded that Labour leadership candidates pledge themselves to “engage with the Jewish community via its main representative groups, and not through fringe organisations and individuals.”

Pogrund and Maguire ignore this, but in chapter 14 they offer a narrative of events leading to the decision of The Times (26 November 2019) to run an astonishing article by Chief Rabbi Ephraim Mirvis, excoriating not merely Corbyn (as “unfit” for high office) but also the Labour Party he led for dragging its feet over rooting out antisemitism in the party. This article constituted an unprecedented electoral intervention by a Chief Rabbi. More than that, it painted “the overwhelming majority of British Jews” as “gripped by anxiety.” “The question I am now most frequently asked [Mirvis opined] is: What will become of Jews and Judaism in Britain if the Labour Party forms the next government?” And he answered this question thus: “This anxiety is justified.”

At page 320 Pogrund and Maguire offer an account of a meeting at Mirvis’s private residence, at which the possibility of his intervention in the 2019 general election was discussed: “Fuelled [they write] by Appletiser and artisan crisps, Mirvis and a coterie of trusted friends – among them leading academics on the Holocaust and anti-Semitism – deliberated over what, if anything, he should say about the possibility of a Jeremy Corbyn premiership.”

Who were these academics?  Only one is identified by name – lawyer and author Anthony Julius – and it’s unclear whether he was actually part of this “kitchen cabinet.” Assuming he was, who were the others?  Mr Pogrund has declined to name them to me.

I am neither a member nor a supporter of any political party. But I can say that, as a British Jew, I was certainly never gripped by “anxiety” of the sort Mirvis recklessly referred to. Nor were any of the fellow Jews in whose circles I am privileged to move. But what I and these fellow Jews did deplore was the unrelenting panic-mongering undertaken by sections of the Anglo-Jewish press, egged on by the Board of Deputies and other communal bodies.

A Corbyn-led Labour government would almost certainly have accorded “immediate” recognition to a Palestinian state (a manifesto commitment). Would Israel then have severed diplomatic relations with the UK? I doubt it. The recognition of a Palestinian state would have remained a symbolic but, in practical terms, meaningless gesture.

Corbyn’s Foreign Secretary (the tactless Emily Thornberry) might have enjoyed striding onto the podium at the UN Security Council to support — perhaps even to propose — some blood-curdling resolution denouncing the Jewish state as a neo-colonialist plot.

She would have done so safe in the knowledge that American president Donald Trump would have vetoed it.

So far as the home front is concerned, in spite of numerous scare stories, I honestly couldn’t see a Corbyn-led government, banning shechita [religious slaughter of food animals] or brit mila [male circumcision]. He had in fact given assurances on these concerns – and, into the bargain, declared his support for Jewish faith schools – at the 9 February 2016 meeting with Jonathan Arkush. If Diane Abbott, appointed Shadow Home Secretary in October 2016, had found herself actually in charge of the Home Office, would she have outraged her many charedi constituents in Hackney by closing down synagogues and moving to deprive Jews of the rights of British citizenship? Of course not.

What the Anglo-Jewish gentry really feared was a Marxist prime minister heading a Marxist government pursuing Marxist social and economic policies. In not explaining this, Messrs Pogrund and Maguire have, I’m afraid, been economical with the truth.