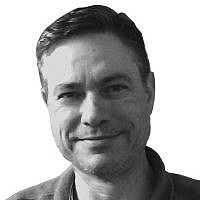 The Blogs
Michael Jaffe
Apply for a Blog
Advertisement
Please note that the posts on The Blogs are contributed by third parties. The opinions, facts and any media content in them are presented solely by the authors, and neither The Times of Israel nor its partners assume any responsibility for them. Please contact us in case of abuse. In case of abuse,
Report this post.

On Friday, the spiritual leader of a mosque in Sharon, Massachusetts  published a letter of sympathy and condolence to the Jewish residents of his town, following reports of resident Ezra Schwartz’s murder last Thursday in near Alon Shvut at the hands of jihadists.

The letter by Imam Abdul Rahman Ahmad has been widely circulated on social media by many who laud the imam’s gesture of sympathy and outreach. While there was reason to appreciate the letter, which actually mentioned “Israel,” there was also a glaring omission. 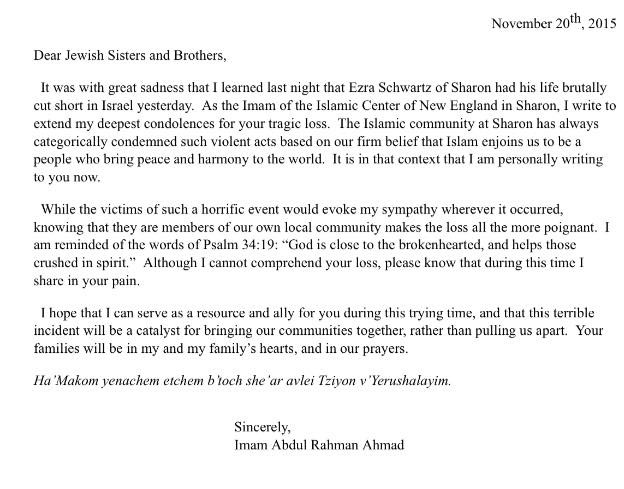 Yes, the gruesome acts are condemned, but therein one does not read any condemnation of the acts’ perpetrators, nor does there appear any indictment of a supposed perversion of Islam. Without knowing the details and context of the Islamist attacks, one might think that the imam is referring to some terrible, random act of violence. But the details and context are known, and this bloodshed was not random; it was inspired and incited by widely-held interpretations of Islam.

Most of the Islamic community, including that of the United States, has yet to confront, vocally and unequivocally, the source of the hatred and violence within their midst and committed in its name. It has yet to address the thirst for conquest and blood within their canonic scriptures and declare, to the world and to the barbarians among them — Wahhabists, Salafists, etc. — how and why they must break from their past.

I believe that the Imam was truly saddened by the loss of life, especially of someone from the community of Sharon, Massachusetts. If, however, he felt that it was the result of a heinous act — in both its immoral conception and its brutal execution — he would have addressed the fact that the murderous brutality had been wrongly committed in his name. He would have unambiguously rejected those Muslims who had committed it as well as the dogma and philosophy which had inspired it. But he did not.

Ordinarily, it is a callous thing to criticize or dismiss expressions of sympathy from anyone who tries to console a mourner. But the daily bloodshed and barbarism should not be ordinary circumstances – and if they have become ordinary, then shame on us all for tolerating them. The enemy faced by the civilized world is not Islam, but Islamism – the widespread, violently barbaric supremacist creed of Islam that finds support among a great many Muslims in many places around the world. If Imam Ahmad is not willing to call out this creed, its leaders and adherents, and separate his allegiance and cause from theirs with crystal clarity, then his letter, while polite and kind, is of limited consolation.

Imam Ahmad’s letter is typical of how the Islamic “mainstream” in western countries deals with the occasionally uncomfortable reality of Islamist brutality. There are declarations of sympathy, but these fall short of introspective responsibility or a determination to actively oppose Islamist hegemony and violence.

There are, however, voices in the Islamic world raised in defiance and rejection of Islamist jihad. We heard them two weeks ago in Israel, when a small group of Israeli Muslims demonstrated against the knifing attacks. We hear them continuously from Zuhdi Jasser, founder of the American Islamic Forum for Democracy.