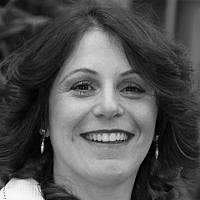 The Blogs
Susie Mayerfeld
Apply for a Blog
Advertisement
Please note that the posts on The Blogs are contributed by third parties. The opinions, facts and any media content in them are presented solely by the authors, and neither The Times of Israel nor its partners assume any responsibility for them. Please contact us in case of abuse. In case of abuse,
Report this post.

I am weary and tired.

How can I not be, when Hamas’s charter calls for wiping the State of Israel off the map and killing all Jews? It’s a scary fact, backed up with pictures and videos, that every single day there are more and more acts of antisemitism worldwide, and in many cases, violent acts.

I’m not going into the anti-Israel rhetoric about whether or not Israel should exist. It exists. So now what?

Although no person and definitely no country is ever perfect, there are facts. Facts as to what each side has done to try to prevent and to minimize the other side’s burden. Facts that I’m pretty sure most civilians in Gaza don’t know. Facts that might, just maybe, make one or two people living in Gaza rethink Hamas and the Palestinian leadership. Maybe even rethink their hate of the Israeli nation.

So what is the Israeli government doing about trying to bring those facts to the eyes of the Gazans? Not enough in my opinion. I think they’re missing a very important opportunity.

So here is my list. One I’m sure is not comprehensive.

1) Israel withdrew from Gaza in August 2005 in order to have a chance at a real peace. It had to misplace over 10,000 of its own citizens from their homes and livelihoods. Some of those people have still not recuperated emotionally or financially and many who had owned homes, are still homeless. Gaza is no longer occupied.

2) During the withdrawal of Gaza, functioning successful greenhouses were left with the thought that it would help the Gazans build their economy. They were all destroyed by Gazans who didn’t want the Jewish businesses. Some of the public buildings Israel left are being used, such as the one housing the Gaza University.

3) Since the withdrawal from Gaza until the beginning of Operation Protective Edge there have been more than 11,000 rockets fired at Israel. Rockets have been fired at the communities around Gaza as well as at cities such as Tel Aviv, Jerusalem and Haifa. Since the operation’s beginning, close to 3000 rockets have been fired at Israel. Israel has the capability to bomb Gaza and level it, but it did not respond to the over 11,000 rockets fired into her borders. It tried for peace, at the expense of a whole generation of children who have grown up knowing they have only 15 seconds to run to safety. Children who have seen their houses hit and people they know die. Children, like your children in Gaza who are also growing up traumatized.

4) During Operation Protective Edge, Israel has agreed to a ceasefire 6 times. Every single one of those ceasefires was broken by Hamas. Barrages of rockets were shot at Israel during the ceasefires.

5) Israel developed a missile defense system which is one of the reasons that the casualties in Israel are minimal compared to the casualties suffered by Gazans, but that’s not because of a lack of trying. It’s also because Israel, unlike Gaza, chose to invest in protection instead of using resources to build terror tunnels and to buy rockets. Israel builds bomb shelters and safe rooms. You cannot legally build a new house today without including a safe room in the house. The expense of building safe rooms and shelters has been something that Israel has been incurring for decades. It’s a burden that every single person living in Israel feels and it’s an added expense that no other country in the world incurs.

6) Over the years, Israel has let tons of concrete and building supplies into Gaza. All these supplies were meant to build homes, business, schools and hospitals. Instead Hamas stole these supplies to build miles and miles of terror tunnels. Tunnels that are used to smuggle and store weapons as well as to carry out terror attacks in Israel. Each tunnel costs about 3 million dollars. For each tunnel built, Gazans could have built 86 schools, 7 mosques, 6 schools and 19 medical clinics. You have been robbed of your future by Hamas.

7) Israel drops thousands of flyers warning civilians ahead of bombings to evacuate and describing where they should go. Israel calls houses to make sure people know to evacuate. In many cases, it’s the Hamas who refuses to let people leave.

8) Hamas is shooting at Israel from inside hospitals, houses and schools. Their missiles sometimes miss and hit Gazan targets like they did with the Al-Shifa Hospital in Gaza and the Al-Shati refugee camp.

9) Hamas is executing and beheading their own people. (Although maybe I wouldn’t include this because this might make a Gazan civilian even more scared than they already are to stand up to Hamas operatives.)

10) Israel opened a field hospital at the Erez Checkpoint to treat Gazans injured during the fighting.

11) Israel treats and continues to treat Gazans in our hospitals. They get medical care including operations and chemotherapy, often times at our expense.

12) Israel provides Gaza with Electricity even though the Palestinian Authority owes Israel billions of shekels for electricity. Even now, through rocket attacks that are being fired repeatedly on Israel, we continue to provide electricity. Not only that, but when Hamas rockets took out an electricity plant providing electricity to Gaza, Israeli workers at great peril to their own safety, worked to fix it.

I would then end the flyer reminding the Gazans that Israel has no interest in occupying Gaza and no interest in fighting the Gazans. Israel is now fighting in Gaza in self-defense to prevent any more rockets being shot at us. Why? Because we, like them, want to raise our children in quiet and without fear.

So Benjamin Netanyahu, drop some more leaflets. But this time drop leaflets that might make a few people think differently about Israel. Maybe the children reading those leaflets will be our peace partners tomorrow and will remember that although we are not perfect, we strive to be humane.

About the Author
Susie Mayerfeld made Aliyah from New York many moons ago at the age of 21 with her husband and a kid and a half. Aside from being a busy mother of 5 and wife to 1 Susie also works as an oncology nurse, is a blogger, and an enthusiatic amateur photographer. Recently, she has also discovered a love for writing poetry in Hebrew. She blogs as Susie Newday at New Day New Lesson as well as on World Moms Blog. You can find her and her creative pursuits on Facebook.
Comments