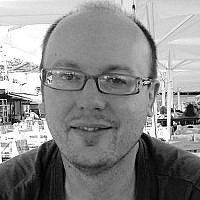 The Blogs
Miroslav Ilias
Apply for a Blog
Please note that the posts on The Blogs are contributed by third parties. The opinions, facts and any media content in them are presented solely by the authors, and neither The Times of Israel nor its partners assume any responsibility for them. Please contact us in case of abuse. In case of abuse,
Report this post.

There are many opinions on what to do with Gaza, talk about improving the humanitarian conditions of Gazans, negotiating a long-term truce with Hamas etc. All have in common keeping Hamas in power and persuading this group not to shoot at IDF soldiers and to stop sending incendiary devices into Israel.

Such status quo with Gaza is about clear distinction between them (Gaza) and us (Israel). Israeli security apparatus considers Hamas terror group as the main responsible subject for all evil spilled onto Eretz Israel.

Well, there have been some voices heard from Israeli politicians and military echelons that people of Gaza should rise up against Hamas and overthrow it. Seems like a dream but this is my focal point.

When I was in a Gaza prison in summer 2014,  I learnt couple of things. Arabs (and all ordinary people) need strong leadership, rules and order. Many of my fellow prisoners didn’t like Hamas. For example, in the big cell there was also Mustafa M., a liberal Arab, jailed for organizing an Arab spring in Gaza. He was (and hope still is) a very good candidate for anti-Hamas movement. As another English speaking prisoner told me, Hamas organized a huge military rally to quench any opposition, so there was no Arab spring in Gaza.

Frankly speaking, you, Israel, should work with democratic Arab people from Gaza. Cultivate, train, organize and arm moderate Arab elements, so that they will be able to overthrow Hamas and set up normal Arab regime in Gaza. This requires radical change  in policy towards Gaza: daring to create a proxy group and use to for holy goal – making peaceful and ‘democratic’ Gaza without any armed groups hating Israel.

It is a public secret that Shin-Bet (I am greeting you, guys) is paying Gaza informers. This is understandable, Israel military needs good intelligence about Gaza terror activities. These informers, if they are lucky after disclosure, are allowed to find refuge in Israel. (In Al-Katiba prison, informers, as the most ‘serious’ criminals, were at the 3rd floor at that time, our cell was at the 2nd floor). Dear Shin-Bet, why not invest more effort into anti-Hamas people in Gaza ? Why only give money for information about terrorists, how about to extend your work by training an Arab fighting group? Distinguished Shin-Bet handler, I know how it is mentally tense hearing your Gaza informer crying of fear. But if you would give him (and other anti-Hamas people) guns and provide adequate (military) help, you would have better feeling, I think.

When Israeli bombs were – accurately – dropping around Al-Katiba summer 2014,  this was a great opportunity to start an anti-Hamas rebelion. All high-ranked Hamas leaders were hiding, prison guards were afraid. But Israel cared only about quickly finishing that conflict and withdrawing its troops from the hell of Gaza (I am not criticizing Israel for that). Afterwards, Hamas crushed any opposition heavily and strengthened its hold on Gaza.

The important thing is that if an armed proxy group (let’s name it the Free Gaza movement) would carry out the dirty job, with Israel’s ‘semi-secret’ help, Gaza would become ‘friendly’ separated from Palestinian Authority in Ramallah. Divide and conquer.

Let me, dear readers, be allowed to conclude this post with shouts: Free Gaza movement, free Gaza army! Arm the good Gaza people and start the uprising! And allow some volunteers from abroad to join the Gaza revolution (through Ben Gurion airport). Maybe I’ll join them. As the former security prisoner no. 4354 I also have old, unsettled score with Hamas.

About the Author
By profession, Miroslav Ilias is an Associate Professor at Matej Bel University, Slovakia. By heart, he is Christian Zionist.
Comments