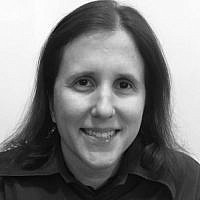 The Blogs
Marsha Morman
Apply for a Blog
Please note that the posts on The Blogs are contributed by third parties. The opinions, facts and any media content in them are presented solely by the authors, and neither The Times of Israel nor its partners assume any responsibility for them. Please contact us in case of abuse. In case of abuse,
Report this post.

Rabbi Chananya Weissman attracted a bit of attention – much of it negative – in a recent article in the Times of Israel titled, “Women’s Daf Yomi: On a different page” –  an article which, in summation, questioned whether or not women learning Daf Yomi should be celebrated, encouraged, or even permitted. The response was overwhelmingly angry for justified reasons – why would anyone, after achieving a massive scholarly and spiritual accomplishment that could easily be the work of a lifetime, enjoy being told that their actions were valueless and even harmful to society? Rabbi Weissman assured us that there were sources to support his opinions, and I think in the minds of many readers who are generally in favor of treating women like real people, we imagined a perfect counter-argument, full of sources to support our “side.” In our heads, we thought if we just wrote the right response, he would see the wisdom of Torah learning and apologize profusely for denigrating half of the species and everyone who values them.

That is probably not going to happen. I don’t think there is anything I can say, or anything I can cite, to convince people that women deserve the same basic human rights as men if they are convinced of otherwise. His argument is familiar to me. There have been numerous articles detailing arguments over the years, particularly the last few, insisting that women should not learn as much as many already do, and those that have become learned while remaining miraculously unharmed should cease immediately. There was a memorable article (since taken down) where a rabbi compared women spending eight months studying in yeshiva in Israel to “fruit rotting in the fields.” There was another article imploring women to “put away their husband’s copy of Yoreh Deah” and instead buy the women’s halachic books because they were more colorful and had pictures – the implication being that a woman who is fully comfortable reading straight out of the Tur should needlessly purchase something below her level of learning. The most recent article I read after Siyum Hashas told women if they wanted to study a page a day, they should try a page a week instead, and instead of Talmud, they should study a much easier text. Again, the underlying assumption here is that women are intelligent enough to learn, accomplished enough to dig deep into advanced texts, but would somehow benefit from studying less Torah.

Imagine any scholar of any period encouraging a fellow Jew to study less Torah. A shonda!

As we begin the new Shas cycle, the argument is currently over Gemara, but let us acknowledge this: arguing about who can study Gemara has never been about Gemara. It has never been about cleaving to Hashem in Torah study, which is heralded as one of the three things that hold up the world (Pirkei Avos 1:2 – but there I go, quoting). It has never been about acquiring practical knowledge. The text was not meant to be accessible. At some point we have to question why. Why do we hover over the Vilna edition, trying to read Aramaic and Rashi script when perfectly good translations are available? Why do we not use more recent additions with better layout and better font? Why do we put stones before us on the path on which to trip?

For all of human history, scholarship has been associated with a leisure class. Until modern times, if you could read and write, you either were wealthy or were important enough that someone wealthy paid for your education. Day workers planting wheat didn’t learn Torah – the landowners who hired them did. In an agricultural society, the very few (usually 5-10%) who were not doing punishing physical labor day in and day out and had the time to devote themselves to anything else were seen as being members of a superior socio-economic class. Scholarship imparted status. Even though Chazal makes mention of many scholars who were poor, the fact that they were poor is mentioned because it was notable, i.e. not the norm, and they must have acquired their scholarship at a time when they were not poor, or because someone paid for their education. Many people like to point out that Rambam was a working physician; except that for the first half of his life, he was the son of a wealthy trader who could afford to study full-time, and then later his brother supported him. Only after his brother’s death did he have to work so hard that he was forced to neglect Torah study. He was a brilliant scholar, but he also started out in a moneyed class that enabled his scholarship.

Even in the era of industrialization and universal education, scholarship imparts status. Teachers, professors, rabbis, and other scholars gain a form of social currency that makes them respected regardless of their actual accomplishments. Note that Rabbi Weissman says that he is not a scholar, but still puts his rabbinical title before his name. If he thought his opinion was worth no more than that of an average person, he wouldn’t make public use of a title meant to convey importance – a title that has been denied to women of great scholarship precisely because it does that.

The thing about high social status is that it implies that there are people who are lower than you – hence the term “high.” The notion of equality can be existentially threatening to someone who values the fact that society places them above others. An elite club is not very elite if anyone is allowed to join. When social, economic, or gender systems with established roles are threatened, even for the better, the people in positions of power may feel as though they are losing something – not because they are being lowered, but because everyone else is being brought up to their level.

Men and women are both guilty of this – there are plenty of women who have kicked down the door in halls of learning, or of politics, only to slam them shut behind them to make sure others don’t get in. Regardless of gender, race, or class, doing so betrays a deep personal anxiety about status. Having achieved greatness, a person might want to make sure it stays special by making sure other people don’t achieve it. There’s nothing logical about this – who wants to live in the world with fewer Torah giants? This is not about how we see ourselves in relation to G-d, but how we see ourselves in relation to each other, and for some people, being better than other people is of higher value than other people being good.

There should be nothing threatening to any rabbi about me taking 45 minutes to an hour of my day to study Gemara. My Torah learning certainly doesn’t detract from his Torah learning. In fact, I could go as far as to say that any woman’s Torah learning – whether it’s Chumash or Daf or a nice story about the parsha at the end of a women’s magazine – does not threaten his Torah learning. Yet male anxiety about power structures – and the perceived threat to their position at the top – generates declarations that seek to invade and police women’s private lives. Condemning women’s entrance to traditionally male spheres of learning is a power play, designed to reinforce the historical domination of women by men in the pettiest and most anti-spiritual of ways. A more generous interpretation of this is that they are not aware of what they are doing – they view the Torah as saying one thing and seek to correct people who say another. As Tamar El-Or, author of the anthropological study of the Gur community in Israel wrote in her book, Educated and Ignorant: Ultraorthodox Jewish Women and Their World, “The Haredi women’s intellectual world is of recent make. Women, unlike men, are not commanded to study, so women in the Haredi sector did not study in any institutionalized way until the second decade [of the 20th century]. For men, knowledge, erudition, and scholarship are a means of enhancing their status, are the basis for the creation of leadership, and grant official sanction to male control of society.” (p. 7)

I would like to presume that our great and wise sages of the past would be worthy of the spiritual credit that we give them, and realize that yes, it is a good idea for every Jew to seek G-d in all of the available ways. I would also like to presume that the people we view so highly are, by merit of their scholarship, compassionate, rational, empathic people who respect the rights and desires of everyone else. But we are, after all, only human, and our emotions can overrule our reason. Since the Gemara is said to teach reasoning, clearly to the solution to this problem for is for everyone to study more Gemara.

About the Author
Marsha Morman is a Master's student at the University of Chicago Divinity School. She has a Certificate of Halachic Mastery from Web Yeshiva.
Related Topics
Related Posts
Comments