The conception of a world beyond our world has been a nearly impossible thought experiment since time immemorial. Throughout the eons, people of all stripes and denominations have wondered where the soul wanders after it leaves its flesh container. It’s such an enormous question with manifold consequences. The idea of the Gates of Heaven emerges early in the Torah:

Is Heaven actually an awe-inspiring place? Or is it a place we should fear? How could we ever imagine something so wonderful when there is no temporal equivalent. Let’s bracket these theological questions and, instead, reach for some meta-questions: Do I believe in a God who judges? Do I think there will be a gates of heaven moment? How might engaging in such thoughts improve the way I live my life? 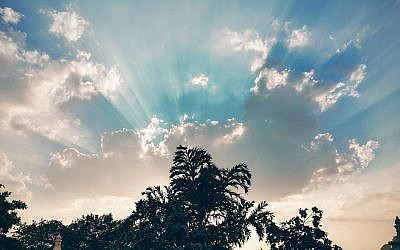 We have the opportunity to open the gates and stand before the Holy One. (Pexels.com)

Heaven is often rendered the last resting place for the righteous on Earth. Through popular media, we expect that Heaven is a white void filled with nothing but clouds, harps, and angels. But nowhere is this vision of heaven found in Jewish wisdom literature. Indeed, the normative interpretation of Heaven in the Jewish tradition is not something we can picture as simple as Hollywood can design, but of another state of being altogether. And that new state of being is one where the highest ethics are weighed, rather than the accumulation of good deeds throughout a lifetime.

In the Talmud, it is recorded that the great sage Rava has a litany of questions that are asked before one is accepted into the gates of heaven. These questions are not what one might expect. As the Talmud records:

Rava said: In the hour that one is brought in front of the heavenly court of judgment, one is asked: Did you conduct (your business) affairs honestly? Did you set aside a special/regular time in your schedule for Torah study? Did you do all you could to have children? Did you yearn for world redemption? Did you deal deeply in matters of wisdom? Did you learn critically?” (BT Shabbat 31a).

What a powerful statement about religious life: that a question about business ethics would take primacy before one was to walk into eternal paradise. If we can extrapolate anything from these questions, it’s that heaven itself, in the thought of the rabbis, may not most centrally be about theological belief, ritual observance, or prayer but about day-to-day ethics. Let’s embrace the power of spiritual imagination to entertain such an idea, whether or not we believe in it.

Interestingly enough, it’s not only an end-of-life moment in Jewish thought. Rather, Jewish literature discussed the “gates of heaven” as a prayer moment as well [Mishnah Torah Laws of Prayer 1:9]. Each time we pray, we stand at the gates of heaven. But the Talmud states we have a problem:

From the day that the Temple was destroyed, the gates of prayer have been sealed, as the verse says, ‘Even as I cry out and plead, God shut out my prayer’ (Lamentations 3:8) (BT Brachot 32b).

But let us not despair, for as it says:

We have the opportunity, through emotional awakening and tears from deep existential arousal, to open the gates of tears and stand before the Holy One.

In addition to what might be asked of us, we might also think about what’s the first question we would ask God? What is it that we yearn to know? Each day, with courage, we can think about approaching the Gates of Heaven. What is my life ultimately about? What are the questions that guide me?

Make an opening for Me like the eye of a needle, and I will open wide for you the gates of heaven (Song of Songs Rabbah 5:3).

The Gates of Heaven, those metaphysical barriers to the road to humanity’s redemption, should always have a place in our minds and souls. While it might be too overwhelming to focus on the “gates” with every action we do, it would be wise of us to take to heart the need to live ethically and to question ourselves before each action. By doing so, we not only have the ability to restrain our basest impulses, but also the opportunity to reflect before we act.

We might ask ourselves each day the questions we suspect we might be asked: “Were you kind?” “Did you take care of the planet?” “Were you compassionate?” “Are you ready for me?” implying that the goal of life is to prepare for the ultimate spiritual encounter!

For me, for a long time, the question has been: “Did you give more than you took?” I find the question so overwhelming and paralyzing at times and so inspiring and empowering at other times. But, the questions need not all be interrogative and judgmental. They could also, for some, be compassionate and empathetic such as: “How are you doing after that wild ride of life?” or “Did you love yourself and act gently with yourself?”

Of course, we will never know, for sure, in this life what is to come. But the gates of heaven thought experiment is an important one to challenge us each day to live by our deepest commitments. Death will come all too soon for all of us and each day is a chance to prepare to live our best lives, with love, joy, reflection, and awe.

Rabbi Dr. Shmuly Yanklowitz is the President & Dean of the Valley Beit Midrash (Jewish pluralistic adult learning & leadership), the Founder & President of Uri L’Tzedek (Jewish Social Justice), the Founder and CEO of Shamayim (Jewish animal advocacy), the Founder and President of YATOM, (Jewish foster and adoption network), and the author of 18 books on Jewish ethics. Newsweek named Rav Shmuly one of the top 50 rabbis in America and the Forward named him one of the 50 most influential Jews.