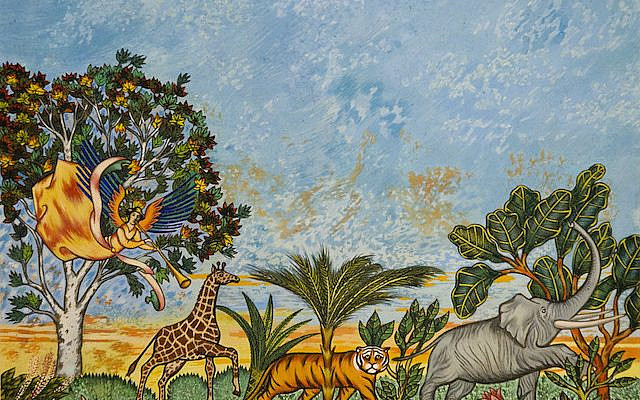 The Torah opens with God creating the world during the Six Days of Creation. Then follows Shabbat: va’yakhulu haShamayim, “And the Heavens and Earth, and all their hosts were completed.” Every Friday night, we open kiddush by reciting this verse and the verses that follow. And we end with one word: la’asot, “to do.” “For on that day, God rested from all his work which God created la’asot, to do” (Gen. 2:3).

What is the meaning of that phrase “to do”? What does it mean in this context, and what does it add to the verse? Why did the text not just end one word earlier?

The Netziv, Rav Naftali Tzvi Yehudah Berlin, offers an answer in his introduction to his commentary on the Torah. The verse, he explains, is telling us that the creation of the world did not end after those first six days. At the end of those six days, God stopped creating. Now, it is we who must continue that task.

The world was created la’asot, with much left to be done. Our task is not just–as an earlier verse says–to have “dominion” over the world. Our task is to delve into the secrets of Nature, to understand its powers of sun, heat, and of water; of wind and of storms; and of its forces–gravity, electromagnetic, and strong and weak nuclear forces–and to bring these forces and this infinite potential into their fullest and best realization.

These forces can be used destructively, to damage and destroy human and animal life, society, and even the world. It is our job, our Divine mandate, to instead use them la’asot: to continue to create, to partner with God in a creation that sustains life and that nurtures growth of us as individuals and as a species. This, says Natziv, is what brings the greatest honor and glory to God.

This mandate of la’asot connects more to havdalah, our entry into the week, than it does to Shabbat, the time of rest. It connects particularly to the blessing borei me-orei ha-aish, “Who creates the lights of fire,” which we recite over the havdalah candle. We make this blessing not, as is often believed, to recognize that we could not use fire on Shabbat (or certainly not only for that reason). Rather, it is to commemorate that fire was the first act of human creation. As the Gemara (Pesachim 54a) relates:

At the conclusion of Shabbat, God granted Adam intellect similar to what exists Above, and he brought two rocks and rubbed them against each other, and fire emerged.

Fire is the greatest human discovery. It is the foundation of civilization. It provides heat and light. It makes cooking possible and allows us to bend and shape metal. It is so powerful that ancient myths speak about how Prometheus had to steal fire from the gods and bring it to humans to give them the ability to found civilization. Indeed, there is something divine-like about fire’s very creation. It is a creation yesh me’ayin, of something out of nothing. A person starts with two stones, and creates not little stones and not a stone tower, but something completely new, different, and of enormous power: fire.

For us, fire was not something that needed to be stolen. Fire was the gift that God gave us. Or rather, and more to the point, fire was the creation that we as humans, with the divine creative intellect that God had given us, brought to the world. And we did so in partnership with God, using our God-given powers to continue God’s work and to bring the world from its initial creation to its fullest realization.

I would ask us to think about this mandate of la’asot as we make havdalah and are about to begin the week. When havdalah concludes, let’s take a moment before we run to check our emails. Let’s not immediately start worrying about our endless to-do lists and the tasks that still need to get done. Instead, let’s take a moment to reflect–perhaps even go around and have each person share–what we want our la’asot to be this week. What will be the vision that frames and propels our six days of creation? Let’s begin the week with knowing what is that one thing that we want to do to bring our intellect, our creative powers, into the world, to partner with God in bringing this world one step closer to its greatest realization.