I am in Jerusalem almost every day. It is a most amazing city. Often cool, comfortable and breezy when most of Israel is hot and humid. In the bright sunlight, the stones of Jerusalem turn golden. As the sun sets, the stones change color, giving off an almost reddish tint. When it storms in Jerusalem, the stones show they are timeless and the homes become cold…the kind of cold that comes deep from within the stones.

In some neighborhoods, you could easily imagine that little has changed in centuries, the arched entry ways speak of a time long ago; the open market places still relying on the strength of the seller’s voice as they call out merchandise and prices, “Bananas, 7 NIS a kilo” – “Avocado! Avocado!” – “Corn! Corn.”

Jerusalem is, most of all, timeless. It always shocks me to walk through the Old City and see cars there. How can they drive on streets so narrow? Years ago, I drove the family car down some of these streets, slowing backing up, turning more sharply as I advanced, watching the sides and wondering how I would make it without scraping the sides. “More, more. Turn right. Right!” the man called out…and I slowed and angled to the right and then to the left and pulled into the side street and wondered how I would ever get the car out again.

The ancient walls show thousands of years of history – where once they shot arrows, now weeds grow. Where once armies were forced to slow their advance by meeting a sharp turn, now cars attempt to take the same path, also slowly making their way through. Where once guards walked the walls, now Israelis and tourists scale the heights to see the amazing views below. Here the ancient ones walked, always here and here I walk today.

Jerusalem is a city that lives in its own space, its own time. In what other city are concerts held in the Sultan’s Pool? Where else can you walk through tunnels created two thousand years ago? Is there another place where you can walk through a valley, come to a tomb and know the name of the man buried there 3,000 years ago? Is there another place on earth as beautiful, as deserving of peace as the beautiful city of Jerusalem.

Mornings here during the Hebrew month of Elul are a blend of shofar blowing, calls to prayer from the muezzin, and church bells ringing. Where else? There are moments when all three faiths are praying and you wonder how there could be any problems at all in the world at that moment. Such prayers, such hope.

On the main street in the center of town, you are as likely to find a stone building that is hundreds of years old, as you are to find one just recently built. You can walk beside the store and see special sales for tourists, and then, as an Israeli, walk in and get a smile and even a better deal! But it is our secret, just between Israelis. Just between people blessed enough to walk these streets each day.

Once, when bombs were exploding regularly, I needed to go put more money in the parking meter but my teenage daughter was trying on clothes…I stood frozen. What if something happens between the car and the store and I’m separated from here. The store owner asked what was wrong and I explained, “Go,” he said to me quietly, “I’ll watch her, I’ll make sure she stays inside.” Years ago, that memory still brings tears to my eyes. The people of Jerusalem are as beautiful as the city.

And sometimes, this ancient, now modern city becomes whimsical. There’s just no other word for it. Lest it become predictable, the city does something different. It builds a living water exhibition that shoots water up to some music only it hears. It adds a modern light rail system on roads that have seen almost every other type of transportation known to man…from donkeys, camels and horses, to trucks, cars, tractors and even tanks. 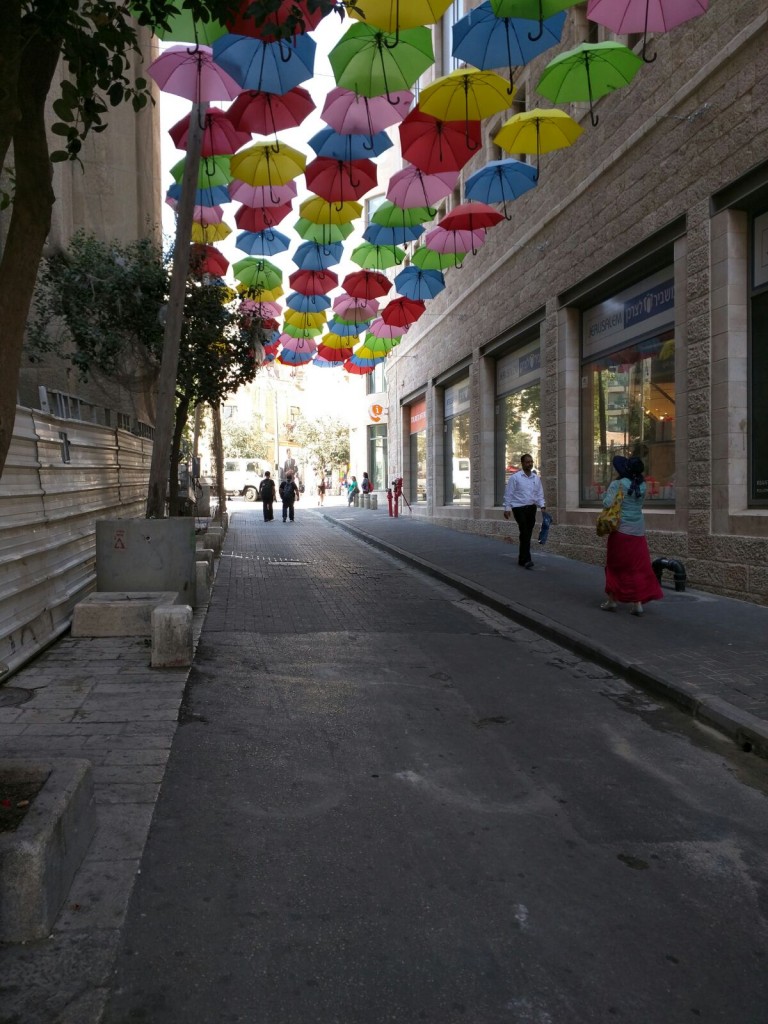 But what makes it whimsical are the times the city does something unusual. Like close in the whole city center and make it one huge outdoor fair; like announce the light rail or the buses are free for the day. Like fill an alleyway with hanging umbrellas.

Like when kids dance and play music in the streets to collect money for charity, and like when strangers walk up to you and ask you to hand this cup of hot soup to Shoshana…and you ask them, “Who is Shoshana?” and so they tell you this is the name of the woman who sits on the steps as one descends from the Jewish Quarter to the Kotel (Western Wall). And because you can’t think of any other response, you take the soup and walk towards a woman you have never met.

And when you give the cup of hot soup to Shoshana, she blesses you and wishes you health and happiness, children and grandchildren.

Like when the man at the top of the steps grabs the arm of your visiting Hindu friend from India and showers him with blessings in a language the visitor can’t possibly understand. And so you translate — he wishes you a long life and children. And a good living and health…my guest smiles, convinced this is the holiest of men and this blessing comes straight from God. And a good living…

And then, as the visitor smiles and believes that perhaps in some way this is a blessing straight from God, the man turns to you and says in Hebrew, “Is this your husband?”

To which I, as an Orthodox Jewish woman with her hair respectfully covered, responds, “Does he LOOK like my husband?”

And so the man cuts to the bottom line, “Does he have money?” Oblivious to the conversation, my Indian friend keeps smiling, hoping I’ll explain the significance of the red string now tied around his wrist. I tell the man, “No, he doesn’t,” thank him, and walk away.

This is Jerusalem, where beggars bless you and tie red string around your wrist to warn away the evil eye; and where umbrellas hang in the streets, and large lions adorn the streets.

On the light rail today, I met tourists from Africa, Europe, and the United States. I heard the sound of the shofar blowing, horns honking, sirens wailing, and children laughing as they waited for the train to take them home. A woman who lives on the eastern coast of England, in a small fishing village, asked me if I ever miss living in the States and without hesitation, I answered, “not once in more than 20 years.”

If you have never been to Jerusalem, a city that has known too little peace, you might think we spend our time wondering when the next war will come, the next terror attack.

I once stood with a friend who was visiting Israel for the first time about a year or two after the Second Intifada had calmed a bit. Her husband was back in the States, not thrilled that she’d chosen to come visit. As we stood in the center of Jerusalem, she spoke to him about how amazing the city was, how calm, how peaceful.

I let her finish her phone call, and then walked her from one memorial to another because Jerusalem can’t be defined by any single status or term. It is peaceful and yet at war; it is divine, and yet entirely set on earth; it is abrupt and rude and polite and helpful.

Today, as I walked through the city center, later rushing to catch the train home, it suddenly occurred to me that a word I had never thought to apply to Jerusalem, seemed to need to be added to all of the above. Today, Jerusalem was whimsical.