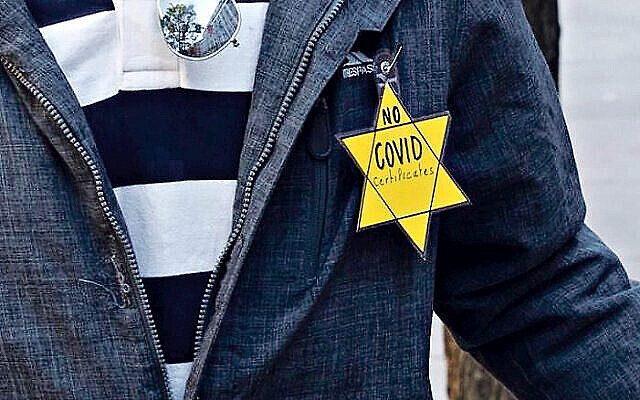 Demonstrator dons a yellow star at a recent anti-Covid protest

Last week one of my favourite people, Freddie Knoller, a Holocaust survivor, turned 100. I met him years ago as a young reporter, and was struck then, as I remain, by his incredibly positive outlook on life, despite the terrible hardships he underwent.

Freddie, full of old-fashioned Viennese charm, was very brave as a young man. I imagine he and other young Jews of his generation can hardly have expected to live to such a great age. Indeed, so many died untimely deaths it scarcely bears thinking of – except that, for Freddie’s sake, and that of the remaining survivors, we must indeed think of what happened and remind the world whenever we can.

Generally speaking, then, I’m in favour of talking about the Holocaust – the actual event, which happened to real people. How could one not be? And yet in the past couple of weeks we were again reminded that there is a small, nasty and virulent pool of people who insist on using the Holocaust for their own purposes, for traducing the memory of the greatest tragedy of the 20th century in order to comply with repellent conspiracy theories – and worse.

At the end of March, a woman called Sandy Kennedy spoke at a rally in support of Bristol University’s professor David Miller, currently accused by Jewish students of making them feel unsafe because of his attacks on Zionism.

Ms Kennedy spoke about a four-year-old boy whose Holocaust experience is recorded in a picture at Yad Vashem, his sleeve rolled up to show his tattoo. She made a direct and specific comparison with a Palestinian child passing through Israeli checkpoints in Hebron. That, she told Jewish students, “is feeling unsafe”.

Do you feel disgusted? Me too. But there is more. Last weekend, there was a massive anti-vaccine demonstration in central London. I watched an interview with a group of middle-aged women who’d come up for the day from Devon and Cornwall to take part, all blonde-streaked hair and unmasked, speaking casually to an equally unmasked journalist, of “genocide”. My jaw dropped. Genocide? Isn’t that a term reserved for deliberate annihilation of an entire people? Are you nauseated? Me too. There is still more.

A brave woman called Chloe Adlestone took pictures of two people, one smiling smugly, wearing yellow stars pinned to their clothing. The stars, deliberately made to look like the yellow stars Nazis forced the Jews to wear, read: “No Covid Certificates”. Elsewhere during the demonstration there was a banner with the slogan: “Stop the vaccine Holocaust.”

Not to be precious about it, but terms such as “genocide” and “Holocaust” or the wearing of yellow stars are not there to be used in support of whichever is the latest conspiracy theory or anti-Israel rant. Perhaps the women from Devon and Cornwall did not intend antisemitism – but making people wear masks or invite them to accept vaccines is not “genocide”.

I dare say the poor people of India, breaking their hearts as their loved ones die in their thousands, would be grateful for the anti-Covid vaccine and would be utterly bewildered at the demonstrations.

Professor Deborah Lipstadt calls the adoption of this terminology in support of such terrifying scaremongering “softcore Holocaust denialism”, and I agree. So take off the yellow stars. Take down the “vaccine Holocaust” banners. Stop drawing comparisons between the suffering of Jewish children in the Shoah and the difficulties faced by Palestinian children. Because it is not the same thing, not grotesquely or remotely the same thing. Freddie Knoller would tell these people so.