Like most academics in the summer time, I recently attended two professional conferences where I presented my research and heard about the research of my colleagues from around the world. Aside from the perk of world travel, summer vacation is an opportunity – perhaps the opportunity – to broaden horizons and learn about the state-of-the-art in our scientific fields. During this particular summer, I had pleasant conversations with Turkish, Chinese, and American colleagues, among many others.

The Turkish colleague was soft-spoken and relayed that he was familiar with the work of one of my colleagues back in Haifa. I, of course, had to share with him my wonderful memories of my two visits to Turkey. I spoke to the Chinese researcher of my hopes to come to China to study how their cities are coping with population growth. He, in turn, expressed interest in establishing research collaborations with Israelis. As an American ex-pat, I also indulged in many conversations with American scholars about US politics.

What didn’t occur to me – and perhaps it should have, if I apply the logic of the growing movement to boycott Israeli academics – is that rather than speaking about our research, I should have been holding my Turkish colleague accountable for his country’s more heinous activities. Turkey, after all, continues to deny its genocide of the Armenian people, its continued oppression of Kurds, its illegal occupation of northern Cyprus and its recent, systematic elimination of multiple freedoms of expression, press, and due process of law. Yet, I didn’t hold my new friend accountable and I wouldn’t. If we were to become closer, I would perhaps inquire about his opinions on controversial matters, but ethically and practically, I wouldn’t hold him accountable for his country’s action. This despite the fact that I’m sure he pays his taxes and his university supports the regime and its quest for hegemony.

What didn’t occur to me – and perhaps it should have – is that rather than building collaborative research with my Chinese colleague, I should have been scolding him for the countless horrors his country has perpetrated on millions of people in the last century, including the dismal working conditions of China’s poor, the repression of religious freedoms of the Falun Gong, and the repression of the national aspirations of the Uighurs and Tibet. Should I have gone straight to the conference organizers to request that all Chinese representatives be removed until they explicitly recognize and renounce their country’s wrongdoings? No. Instead, I simply enjoyed meeting the scholar and hearing his thoughts and opinions on a wide variety of issues. He is not responsible for his country’s actions, though I’m fairly sure that his job security depends, at least in part, on his acquiescence.

What didn’t occur to me – and perhaps it should have – is that rather than having an amiable discussion about US politics with my American colleagues, I should have inquired as to what right US scholars have speaking in an international forum. Their country, after all, is guilty of innumerable disingenuous interventions that plunged so many countries, from the Middle East to South America to Southeast Asia into prolonged war, poverty and misery. The US, with its elite universities, was built on the suffering and death of millions of Native Americans and black Africans and their government is responsible for the highest incarceration rates and income gaps in the world. And the universities are complicit in the continuation of American hegemony through military and weapons research, ROTC programs, and preparation of the next generation of American military and business leaders who will seek to perpetuate American power at the expense of the rest of the world. Shouldn’t US scholars be held accountable for their country’s activities, and shouldn’t they be excluded from international venues until all of these wrongs are redressed? No. I wouldn’t hold US academics accountable, knowing that many of them have dedicated their professional and personal lives to correcting these ills and believing that it is against the precepts of scholarly culture to discriminate against them in this way.

But today, a growing global movement is calling for one country’s academics (and only one country’s) to be held accountable for their country’s actions: Israel. In personal terms, this means that if I go to a conference and speak on a panel with – say – Iranian, Turkish, Chinese, British, Russian and American academics, only one of us will be expected to answer to its country’s wrongdoings. Only one of us will have our country’s very legitimacy questioned. Only one of us has a small but growing circle of haters dedicated to rewriting our history, ostracizing us and painting us in blood red.

The movement seeking to boycott Israeli academics proposes that they have an ironclad argument that Israel is – among the family of nations – an aberration or an anomaly. In their narrative, Israel is more evil than any other and thus the only country to warrant an international boycott. In their narrative nuance, balance, inquiry and complexity are thrown aside for simplifications, dogmatic clichés and in some quarters, the most vile of stereotypes. In order to assure that their narrative of Israel, of Zionism and of the Israeli-Palestinian conflict perseveres and becomes dominant, they wield a weapon to silence anyone who disagrees with them. Remove the Israelis from the room, deny them access to your campus, harangue their speakers, picket their classes, boycott their institutions.

There are two words that come to mind when reading endorsements of the academic boycott of Israel. The first word, if charitable, is hypocrisy. Those who would hold only Israelis accountable for their country’s real and/or imagined crimes, but not apply similar standards to every other country are hypocrites at best. The second word is less optimistic: antisemitism: targeting the Jewish state while using violence and intimidation to silence its citizens. This is a word I had hoped was eliminated from the respectable circles of thoughtful, nuanced and balanced society. But this boycott movement has confirmed for me that this brand of hate is alive and well, and dwelling in the heart of the ivory tower – from the American Studies Association, to the American Anthropological Association, to the 300+ British Academics advertising in the Guardian, to two American-Jewish intellectuals, who felt obligated to tell the world via a Washington Post op-ed, that they – as Jews – are also boycotting. While most boycotters yearn for the elimination of Israel, these latter individuals claim they are boycotting out of love, even though they realize that they are joining forces with those that hate.

There is a sad irony in their effort as far as this writer in concerned. They claim that only through boycotting Israel will Israelis wake up to the evil of the occupation. I didn’t need them to tell me what the occupation is and what harm it is doing to Israeli and Palestinian society. And in any event, Israeli academia is not a tool of their political agenda. Boycott advocates did teach me that one of the arguments for the creation of a Jewish state – the necessity of a refuge from antisemitism — is no less valid today than it was in the 1930s. The Israeli left, which opposes the occupation and advocates for mutual respect, equality, self-determination and security for Israelis and Palestinians, now has a two-front fight: The anvil of the occupation, with all of its destructive implications, and the hammer of academic antisemitism.

About the Author
Daniel Orenstein is an associate professor in the Faculty of Architecture and Town Planning at the Technion – Israel Institute of Technology. His research interests include human-nature interactions, environmental issues in Israel and globally, and public engagement in environmental policy. His general interests are much broader.
Comments 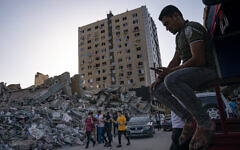