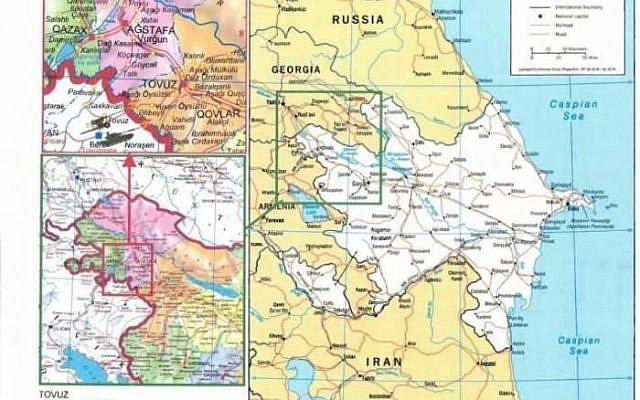 Clashes involving heavy artillery broke out between the Armenian and Azerbaijani militaries on 12 July along the Tovuz section of the border in western Azerbaijan. Both sides are blaming each other for provoking the clashes. However, Armenia’s claim that an Azerbaijani UAZ military jeep tried to infiltrate the Armenian side of the border in order to carry out sabotage simply makes no sense. Sabotage requires either stealth and secrecy or the protection of armoured hardware, neither of which a clunky jeep can provide.

Second, the incident happened along the internationally recognised border between the two countries, not along the contact line which marks the “border” of the Azerbaijani territory occupied by Armenia. It is clear that Azerbaijan has no interest in carrying out a border war with Armenia in the highlands of Tovuz, as Armenian incursion into Azerbaijani territory here would give them the potential to shell vital energy pipelines that pass through the bottom of the valley down below. If Baku wanted to start an operation against Armenia, it would make sense to do it in Karabakh or the other occupied territories. So what is really going on and what is the objective of these border clashes?

Karabakh peace negotiations were initiated in the 1990s, but have not produced a peaceful solution acceptable to both sides. The process, mediated by the countries that co-chair the OSCE Minsk Group – the USA, France and Russia, has been fruitless and it is clear that negotiations are deadlocked. The change in Armenia’s leadership in 2018 did not help the process to move forward either. When he came to power. Armenian Prime Minister Nikol Pashinyan tried to change the negotiations format by calling for the self-proclaimed and Armenian-controlled Mountainous Karabakh to participate in peace talks. Baku rejected the idea, standing by its position that the conflict should be resolved on the basis of the principle of territorial integrity, with Mountainous Karabakh being given the highest autonomy within Azerbaijan. Armenia seems to be pursuing a policy of strategic ambiguity, claiming that Karabakh is all about self determination. However, when the conflict started in 1988, the demand was for the unification of Karabakh with Armenia. The movement that stirred up the conflict was even called Miatsum, meaning “unification” in Armenian.

Azerbaijani President Aliyev openly stated in an interview on 6 July that the “peace” process has become meaningless and the Minsk Group is not doing enough to pressurise Armenia to make concessions. The Minsk Group said in a statement on 30 June that “there is no military solution” to the conflict. By not pressurising Armenia to make concessions, such as returning the seven occupied Azerbaijani districts around Mountainous Karabakh, and at the same time trying to prevent Azerbaijan getting the seven districts back, the Minsk Group has emboldened Armenia. Yerevan has for several years been creating settlements, infrastructure, and roads connecting Armenia with Mountainous Karabakh via the occupied Azerbaijani districts. It has changed the names of four of the districts (Kelbajar, Lachin, Qubadly and Zangilan) and resettled Syrian Armenians there. This shows that the peace process is deadlocked, because Armenia has annexed not only Mountainous Karabakh, but these other districts too and has no intention of returning them.

In a referendum held in 2017, Armenians changed the name of the Mountainous Karabakh Republic to Artsakh. This would appear to approve a land grab from Mountainous Karabakh down to the Araz (Araxes) river. The boundaries of the Soviet Union’s Nagorno Karabakh Autonomous Region did not reach the river, which also marks the border with Iran.

The main reason the peace process is not moving forward is that the status quo is beneficial for Armenia in achieving its long-term objectives.

Armenian Prime Minister Nikol Pashinyan made Karabakh his first priority when he took office. During a visit to Karabakh in August last year, contrary to the peace process, Pashinyan provocatively called for unification between Armenia and Mountainous Karabakh. He went further by saying that “Karabakh is Armenia and that’s it”. The inauguration of Arayik Harutyunyan as “president” of Artsakh on 21 May in the city of Shusha, which had a predominantly Azerbaijani population inside Mountainous Karabakh Autonomous Region during Soviet times and is a cradle of Azerbaijani culture, was another example of Armenia taunting Azerbaijan. It was strongly condemned in Azerbaijan. Other senior Armenian officials, including the foreign minister, also visited the region. The Armenian foreign minister even tweeted a picture of himself in Kelbajar, which is one of the occupied Azerbaijani districts around Mountainous Karabakh. 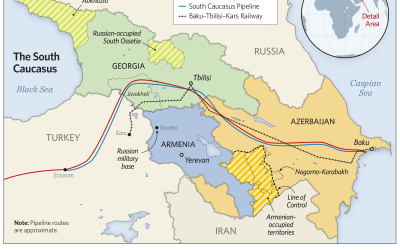 This showed that Armenia was up to something. Prime Minister Pashinyan was involved in domestic political struggles against Gagik Tsarukyan, leader of the largest opposition party in Armenia and accused of corruption and bribery, and against former president Robert Kocharyan. Prime Minister Pashinyan seems to have chosen provocative moves to strengthen his fragile government. The border provocation that started on 12 July was the culmination of Pashinyan’s grand strategy to pressurise Azerbaijan to agree to his plan of annexing Mountainous Karabakh plus Kelbajar, Lachin, Qubadly and Zangilan. The Armenian leadership appears to have chosen the state border between the two countries near Tovuz in order to capture strategically important Azerbaijani positions: Armenian troops would then be in close proximity to the oil and gas pipelines that are the heart of Azerbaijan’s economy and revenue. This would prevent Baku from considering a military solution in future to get back the seven occupied districts, and would force them into concessions to accept the annexation of Mountainous Karabakh plus four of the seven occupied districts.

This is Armenia’s grand strategy, which poses a threat not only to Baku, but also to the strategic interests of Israel, Turkey and Europe. Israel and Europe are major consumers of Azerbaijan’s oil and gas, which reaches their markets via pipelines passing through the Tovuz region, Georgia and Turkey. Ankara realised the scope of Yerevan’s adventure and issued a string of statements supporting Azerbaijan.

About the Author
A native of Azerbaijan, I write extensively on political developments in the Caucasus, Iran and the Middle East. City, University of London graduate.
Comments