The Blogs
Sharon Klaff
Apply for a Blog
Advertisement
Please note that the posts on The Blogs are contributed by third parties. The opinions, facts and any media content in them are presented solely by the authors, and neither The Times of Israel nor its partners assume any responsibility for them. Please contact us in case of abuse. In case of abuse,
Report this post.

In 2014, there was an uprising amongst the Jewish Community in the UK. Over 700 people attended a meeting to tell the BoD (Board of DeputIes of British Jews) that they were not doing their job properly, that they needed to take stock and reform. That was 2014, the year of Operation Protective Edge, the war against Gaza that spiked an increase in global antisemitism and that caused the largest ever spike in UK Jewish activism.

Since that time, as a nod and a wink to this rebellion, there has been a rollout of FOI (Friends of Israel) organisations under the auspices of the BoD. Activists in many centres regularly run Israel stalls in town centres where they have some success in combatting the propaganda of the local anti-Israel organisations under the Umbrella of the PSC (Palestine Solidarity Campaign) and the BDS boycott movement. Clearly several of these grass roots organisation have grown in stature and size. Being well funded and registered some grass roots organisations are transformed into the slick – yes you got it –  new establishment.

After only some four years the transformation is humungous. We see these new gentlemen and the odd lady, walking in the sidelines never to dirty their hands at any real grass roots activism. Now we find those who used to hold megaphones, shouting themselves hoarse against antisemitism and anti Israelism, fog-horning their voices in the name of the cause, holding wifi microphones in halls and on stage, no different to the old establishment, avoiding being too out there in case they are not invited to the next feast as a fellow guest speaker or attendee. We see them using their new found power to have the real grass roots evicted from meetings and seminars at the snap their well greased fingers to the security chaps on the corner, quoting antisemitic journals as evidence for such action, some even making accusations of ‘white supremacist’ based on that same spurious antisemitic propaganda. Whoosh, if only they could smell the scent their new found Old Spice perfume.

What is it that causes people to submit? Why would someone who once took to the streets for change, acquiesce to the lure the enriched old establishment? What was the point then of taking to the streets to effect change if achieving change becomes hostage to fortune? That’s it, hostage to fortune. We find this week, courtesy of the old establishment, that these chaps and a girl or two are sunning themselves in Israel, ringing the bell for Women Wage Peace, an organisation funded by the very people our new establishment was once grass roots against. What a disappointment.

Journalist Ari Sofer once asked me to arrange a meeting of these great grass roots activists so he could write an article for publication in Israel. Well Ari, this is the article you should now write having been prevented from doing so then due to undue pressure from one of the “Leaders of the Grass Roots” as they are hailed by the old establishment, the out of work chap now top-hatted and cock-a-hoop new establishment with a red faced Israeli suntan courtesy the community’s donations to charity. Taking freebies all round one has to question what is it they ever understood about the issue they once grass rooted.

Well they have managed to get the old establishment to tag on to the rise in antisemitism and to ease themselves out of their slumber to arrange a protest. Yes a protest, the once iffy domain of the grass roots, standing on street with a megaphone, yelling out an injustice, a cause. Dayenu they said to Jeremy Corbyn’s ‘for the many not the Jew’ Labour Party. ‘It will suffice’ they said, once again showing that demos are not their thing, getting the wrong slant as though we should be grateful for the amount of Jew Hatred being overseen by Corbyn. However, they have managed to cause a storm about antisemitism in the UK. There is hardly a day since then that the topic, the very core of antisemitism, Jewish Power, is not being aired, sometimes even a few times a day. And what do you suppose is the result? Yes I think you got it, well you would if you listened to the now free licence for Jew haters to crawl out of every crevice of this land to say exactly what they think of Jews, camouflaged of course as they say by legitimate criticism of Israel. 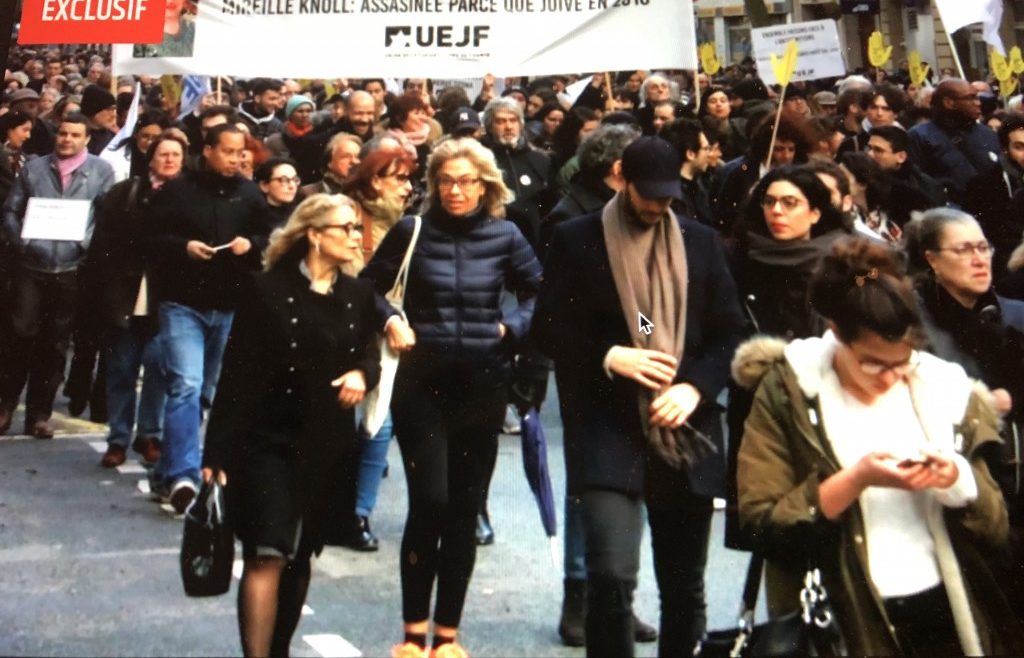 Mireille Kroll, murdered because she was a Jew 2018

But whats it all about Alfie… What is really happening that remains the dirty little secret? I wrote about it here If we are to be talking about antisemitism, we need to know what we are talking about and we need to speak up. Is it possible that the old establishment, aided by the new establishment have raised an awareness of a syndrome about which they seem either to have little understanding or they are too afraid to speak out loud about? In France, it took the hideous murder of a Holocaust survivor that followed several other Jewish aimed murders to get a group of 250 to sign a manifesto translated here by Mladen Andrijasevic You would all do well to read this and ask why the silence?

About the Author
Sharon Klaff lives in London with her family where she is active in combating replacement ideology and antisemitism. She is a founder member of Campaign4Truth, the grassroots group established in 2009 and affiliated with Eye on Antisemitism monitoring anti-Semitism on social media.
Comments