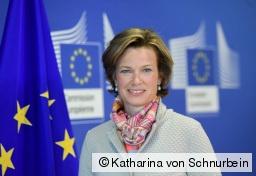 Katharina von Schnurbein is an EU Coordinator on Combating Antisemitism. What is the sense of having her in that position? Is her position on the Holocaust sincere?

During the last 5 years, von Schnurbein received 57 complaints about the facts that

She responded to none of those complaints. The principle of good administration requires a public servant at least to respond to complaints. Moreover, she is in a Twitter conflict with the Simon Wiesenthal Center.

The European Union provided money for the memorial plaque of Vytautas Landsbergis (1893 – 1993) under the measure No. 05.4.1-CPVA-K-303, and it hangs in the Kaunas Technological University. Vytautas Landsbergis was the Minister of Public Property in the Lithuanian Nazi Government in 1941. The public institution Jewish Concentration Camp and all the ghettos were under his authority. Moreover, Vytautas Landsbergis signed the Act on nationalization of Jewish property on 19/07/1941 proclaiming that Jews had no right to own any property. On 04/08/1941, Landsbergis voted to appoint murderer Jonas Noreika to govern Northern Lithuania.

The EU funded plaque mentions that Landsbergis was an architect, but does not mention he was a Nazi and a Holocaust manager. Ok, so let’s call Adolf Hitler a painter.

As I understand, she is not willing to criticize the EU funded Nazi plaque, because Vytautas Landsbergis’ great grandson Gabrielius Landsbergis is the current Minister of Foreign Affairs of Lithuania. Criticizing the great grandfather might make Lithuania Eurosceptic.

Katharina von Schnurbein is wrong. Her inaction and absence of opinion strengthens Holocaust revisionism in Lithuania. It is wrong to believe that Neo-Nazis may remain pro-EU in a longer term.

The European Union funds a lot of cultural activities in the Kaunas City, since it is the European Capital of Culture 2022. Katharina von Schnurbein ignores the fact that Kaunas has 4 streets named in honor of the most famous Lithuanian Holocaust managers: Vytautas Landsbergis, Kazys Škirpa (Prime Minister of the Nazi Government), and even Jonas Noreika (aka General Storm).

57 letters informed Katharina von Schnurbein that Lithuania glorifies Jonas Noreika who had murdered about 14,500 Jews from 22/06/1941 to 17/03/1943. She knows that he signed the business plan of the Skaistgiris death camp on 23/08/1941. She knows that he signed the Orders on nationalization of Jewish property and on the duty to wear 2 (two) David stars on 16/08/1941, on imprisoning all Jews in the Zagare Ghetto on 22/08/1941. Katharina von Schnurbein knows that Noreika was receiving reports about massacres of Jews on 25/08/1941.

By the way, the NFT of how I have destroyed the Nazi Noreika monument is available on OpenSea as the first political protest on blockchain.

Katharina von Schnurbein knows that there is the Landsbergis school and the Noreika school in Lithuania, and that the European Union provides money for textbooks in those schools. She knows that the Lithuanian Military Academy is named after Jew murderer Vytautas Zemaitis, and that the Lithuanian Military Education Center is named after Jew murderer Adolfas Ramanauskas.

Katharina von Schnurbein knows that 5 persons got a prison sentence in Lithuania for criticizing the Holocaust: Giedrius Grabauskas, Giedrius Šarkanas, Miquel Puertas, Stanislovas Tomas, and Viačeslav Titov (the latter got an opportunity to replace the prison by a € 10,000 fine). This is not the matter the EU Coordinator should ignore.

Thus, what is the sense of having Katharina von Schnurbein as the EU Coordinator on Combatting Antisemitism?

About the Author
One of world leading lawyers in litigation at the United Nations judicial bodies, the European Court of Human Rights, the ICSID & UNCITRAL Investment Arbitration Tribunals. Professor of international arbitration law at the Russian New University (Moscow), Eurasian Academy of Law (Almaty), and Narxoz University (Almaty). PhD in law of the University of Paris I Sorbonne. Polyglot speaking 16 languages. Theoretician of Critical Legal Studies, postmodernism of law, judicial shamanism, post-law, post-truth and postness. Lawyer no. 116 at the Russian Foreign Lawyers Registry. The most hated lawyer by the contemporary Lithuanian neo-Nazi regime. Email: stanislovas.tomas@gmail.com
Related Topics
Related Posts
Comments