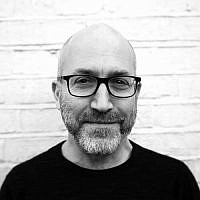 The Blogs
Oliver Kenton
Apply for a Blog
Advertisement
Please note that the posts on The Blogs are contributed by third parties. The opinions, facts and any media content in them are presented solely by the authors, and neither The Times of Israel nor its partners assume any responsibility for them. Please contact us in case of abuse. In case of abuse,
Report this post.

“…and when someone throws a rock at a Jew, who is going to pick it up and ask: “Hold on, can we just be a clear? Was this an anti-Zionist rock or an antisemitic rock?”
– Daniel Finkelstein, “Anti-semitism hasn’t been an issue for me. Now it is“, The Times, August 21st 2014

So as this whole issue grinds on, both in and out of the news, I have sadly and unexpectedly found myself having to confront this exact question – and not in some vaguely silly way as is generally, by far, my preferred mode of Facebook communication (where these thoughts first appeared), or by riffing on my own genealogical archetypes and Woody Allen tropes for added amusement – but in an increasingly personal and disquieting way. Yes, it’s a big fat awkward and uncomfortable subject and – as has been shown vividly across both social and traditional media over the last 6 weeks – has the potential to be highly divisive. And while I’ve had my personal share of it over the years, from the at one time painfully direct to the most casual or even accidental variety, I – much as in Daniel Finklestein’s article – have never really found much cause to sound an alarm, much less talk about it openly.

But last week two things happened which, until very recently, I would have thought of as absurd or even ridiculous actions. And, as such, I find I can’t quite bring myself to conjure a humorous aside or an irreverent remark to adequately draw attention to the disturbing tide of sentiment polluting our media and, it seems, our un-mediated real-life: on Tuesday, my local high-street – a place where I regularly take my children to eat or to shop – became a focus for a stupid, corrupt, unprovoked, but clearly pre-mediated, anti–Semitic attack. An attack in which Palestinian flags, aggressive behaviour and vicious, damaging language was hurled provocatively at Jewish – not Israeli – businesses (and for anyone left who still doesn’t understand the difference, I’m not about to explain it here) and the people in them. Meanwhile, the police – for reasons that are inexplicable given the circumstances – are apparently unable or unwilling to ascribe any of it to race crime. Then a few days later, by complete contrast to this very real threat, I discover that some former colleagues and friends – apparently in the wake of my own uncharacteristic upsurge in social–media soapboxing on or around this subject – have pointedly decided to ‘de–friend’ me (and before you ask, no it wasn’t random: their social alliances are well known, while their spring–cleaning of Facebook friends, which did not only include me, was decidedly… specific).

Yes, it was a bit weird and initially I was just going to let it go. Chalk it up with a sigh. Until I began to realise that – irrespective of their intentions – this was actually an ugly act, an ugly and reactive act with ugly consequences. You should know that there was no preamble or pretext for this, there was no dialogue, no conversation-turned-sour, no angry exchange of views or debate-gone-south (despite the ample opportunity to do so, had they desired), just a silent act of protest and exclusion. Don’t get me wrong, I am not tearful or sad at the loss of a great friend; all of us have an eclectic mix of ‘friends’ on Facebook, from our most loved to the random bloke you barely remember but for the fact they contacted you early in your Facebook life and reminded you that you once did a Saturday job together, but never speak to. Nonetheless these were, to varying degrees, smart, interesting people I had spent time with. So while I may not be sad, I am offended and I am angry. Not by their departure, but by their willful act of exclusion based on – what – the fact I hold some alternative views to them on the whole Gaza-Israel situation? But alternative’s ok, isn’t it? There’s no requirement that we all have think the same stuff to remain friends. Different is what makes the world turn. It can’t all just be the with-us-or-against-us argument, despite what this de-friending action seems to be telling me about that.

So, yes, I’m offended by this act of protest and exclusion that, by extension, seeks to demean me and my views. Just as I am angry and offended by that unwarranted act of aggression on my local high-street – an act also intended, by the way, to exclude and demean me or, worse, to actually kill me and those I care about. People will say no, no – it’s an anti-zionist protest, not anti-jewish! Or they’ll say it’s only a small thing, some idiots at work, forget about it. But it isn’t a small thing and I can’t forget about it because when I hear ‘death to the Jews’ or ‘Hitler should have finished the job’ they’re not talking about history, or some abstract idea that is Israel. They’re not talking about some crazy rogue ultra-Zionist figure. They’re right here, in a leafy suburb of north London, and they’re talking about me. They’re talking about my family and my friends. They’re talking about my two small children who – contrary to what these ignorant protesters and de-frienders would presumably have you believe – are not genocidal maniacs, they do not run the banks and own the media, they don’t want to destroy the Palestinians (through what would surely be some incredibly mystical influence of the Israeli government), and nor do they want to turn other children’s blood into crackers. They’re just little girls who like Frozen and drawing pictures and eating fish-fingers and dancing and wearing spinny–out dresses and when someone decides that I am no longer welcome in their social media ‘house’ simply because I would speak up to try, in my own small way, to protect them from such a grossly distorted and overbearing media-driven portrait of who and what they are, then I have to finally ask; what’s with all the rocks – and why are you throwing them at me?

About the Author
Oliver is a Creative Director for a global Digital Consultancy. He’s spent quite a lot of his working life designing human-centred products, services and experiences for some of the worlds leading retail and financial services brands. He also works with a London-based pluralist Jewish community, Mosaic, providing design, brand & comms strategy. In the non-work bits of his life life, Oliver rattles around north London trying to keep up with the demands of his young family and the other strange animals that live in his house. If there’s any time left, he avoids dairy, watches movies, reads books and thinks about stuff. Sometimes he writes it down.
Comments