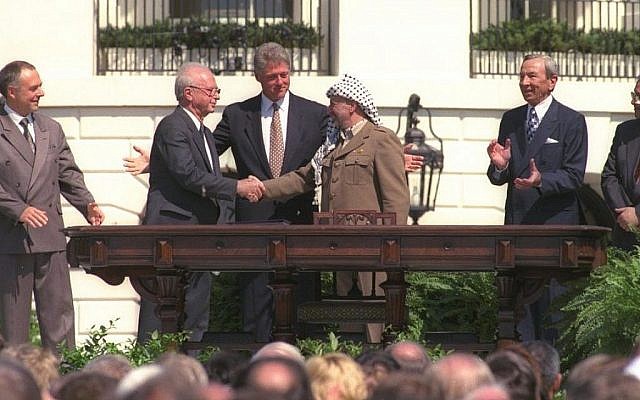 As a passionate 16 year old I was electrified by the promise of the Oslo Accords. I had been to Israel twice and spent considerable amount of time in a relative’s settlement. I had been struck by the community’s need to carry guns to Shabbat prayer services. I stared at the seven foot high bullet blocking concrete barriers that lined the side of the town that faced the nearby Palestinian Arab village. The potential to end the need for security and stop the bloodshed spoke to me and I couldn’t understand people’s resistance to Oslo.

Less than two years later I was studying in a yeshiva outside of Jerusalem and experienced Prime Minister Rabin’s assassination, constant Palestinian Arab terror attacks, and the breakdown of the Oslo Accords. The history of up and downs, Israeli offers and Palestinian Arab rejectionism, including the launching of a second intifada is well known. With the defeat of Ehud Barak and election of Ariel Sharon, the intermittent revival of talks gave little hope of an achievable peace. Over the last decade skepticism has overtaken promise and peace between Israel and the Palestinian Arabs seems a distant dream.

At some point over the past decade Palestinian Arabs and their advocates have pulled off a masterful trick. The Oslo Accords and the quest to end the Israeli-Palestinian conflict had been known as the “peace process.” Instead of the focus being on peace, the focus switched to the creation of a Palestinian State. The “two state solution” replaced the “peace process” as the vehicle to end the conflict. The exact point of the switch is debatable, but it is undeniable that the current quest to end the conflict is more about a Palestinian State than establishing peace.

How did peace take a backseat to the two state solution? Palestinian advocates created a fictional injustice of Palestinian Arabs being robbed and Israel being the impediment to their state. A cursory examination of Arab reactions to the offer of a state will find their repeated rejections to all offers. Whether it was the 1930’s Peel Commission, the 1947 UN partition plan, Oslo, or Annapolis, the Palestinian Arab community has rejected all offers of their own state. Fraudulent doesn’t begin to describe the claim that 80 years after their first rejection Israel has prevented Palestinian statehood. In blaming Israel, Palestinian Arabs have shirked culpability for unfailing dedication to terror and violence.

With the replacement of peace with the two state solution, any hope of ending the Israeli-Palestinian conflict has been terminated. Israelis will always prioritize their security over Palestinian statehood. Lebanon and Gaza having taught Israel the harsh lesson that ceding land without peace creates terror and death. Until the focus returns to peace, a two state solution and a Palestinian State will never materialize.