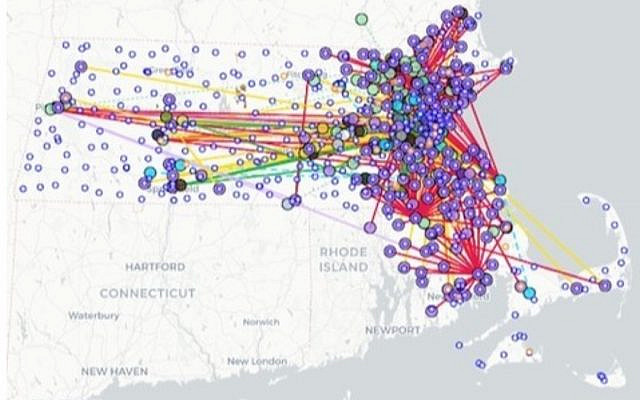 On Thursday June 2, the Boycott, Divestment, and Sanctions (BDS) movement’s Boston branch shared an interactive map on its Instagram page identifying various “Zionist” organizations throughout Massachusetts that they accused of being behind “policing, evictions, and privatization locally, and to US imperialist projects worldwide.”

It was another action done by the BDS movement that the American Jewish community widely considered problematic and is the latest incident that brings up the million dollar question: is anti-Zionism antisemitism?

However, the map shared by the BDS Boston group may be an example of how anti-Zionism may become antisemitism through a different avenue.

One of the many classical antisemitic tropes throughout history has been blaming Jews for many of the world’s problems. In the case of the Instagram post, it was accusing Zionists of being behind police brutality, evictions, and colonial projects in the US and abroad. One may argue that it was not an antisemitic trope because they were accusing “Zionists” of these crimes rather than “Jews.” However, when you consider how broadly American Jewish society identifies with the general ideas of Zionism and Israel, you may find yourself blaming the vast majority of American Jews in practice when blaming Jewish Zionists collectively.

To be sure, some have challenged these polling numbers. For example, Caroline Morganti goes over a comprehensive assessment of various polls to provide a more nuanced view on American Jews’ attitudes towards Zionism and Israel. However, even if her findings are generally valid, American Jews’ favorable views of Zionism and Israel likely would not go below 80 percent. As a result, it is reasonable to assume that anywhere between 80 to 95 percent of American Jews identify themselves as some form of Zionist and pro-Israel.

These numbers may be explained by how American Jews define what it means to be a “Zionist” and “pro-Israel”, which is supporting the existence of a Jewish state so that the Jewish people may practice their right to self-determination. In other words, the vast majority of American Jews identify themselves as Zionists and pro-Israel, not necessarily because they support the policies and actions of the Israeli government – many of them do not, in fact – but rather because they support the general principles and ideas they represent.

With that said, when one collectively accuses “Zionists” of being behind certain forms of oppression without making the meaningful distinction between a Zionist who supports the Israeli government’s controversial policies and actions versus someone who believes in the broader idea of Zionism, you may end up accusing anywhere between 80 to 95 percent of American Jews in practice for these social ills, which is not too far off from the purpose of classical antisemitic tropes.

This was evident in the map shared by the BDS Boston group, as it targeted not just pro-Israel lobbiest groups like the America Israel Public Affairs Committee (AIPAC), but also some of the most progressive Zionist organizations, such as J-Street and the New Israel Fund (NIF), who are leading the charge on the ground against the occupation. In fact, it not only blacklisted some of the most progressive and anti-occupation Zionist organizations, but it also blacklisted Jewish cultural organizations, such as Jewish day schools and Jewish community centers in Massachusetts.

Again, this was likely because the interactive map identified “Zionist” organizations based on American Jews’ general support for the principles and ideas of Zionism rather than supporting the Israeli government’s policies and actions. However, such collective targeting may lead to the exclusion of American Jews from progressive circles and may even put their safety at risk. A map is, after all, the very thing a violent extremist needs to find his or her targets.

Progressives certainly can and should be critical of the Israeli government’s policies and actions that are not conducive with peace and justice, but they also need to be mindful of what is criticism of certain policies and actions versus what is delegitimization of certain ideas and principles – and it is the latter that crosses the line.

About the Author
Jonah Naghi is a Boston-based writer and the Chair of Israel Policy Forum's IPF Atid Steering Committee in the city of Boston. A frequent commentator on Israeli-Palestinian and US-Israel affairs, Jonah has spent extensive time in the region and received his Masters in Social Work at Boston College (2020) and LCSW (2021). All the views expressed are his own.
Related Topics
Related Posts
Comments