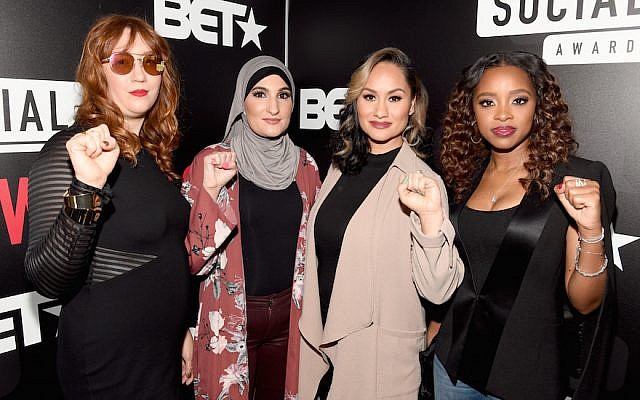 The organizers of the Women’s March, from left to right: Bob Bland, Linda Sarsour, Carmen Perez and Tamika Mallory at BET’s Social Awards in Atlanta, February 11, 2018. (Paras Griffin/Getty Images for BET via jTA)

Even in his 80s, Farrakhan was in rare form. He railed against the “Satanic Jews,” reveling that “the Jews are my enemy,” and that “white people are going down.” In short, he gave the crowd the full hate-filled treatment for which he is known.

Mallory loved it. She’s been attending Saviors’ Day events for 30 years. Two years ago, she posted an Instagram photo of Farrakhan with his arm around her. Her caption read: “Thank god this man is still alive and doing well. He definitely is the GOAT.” For the uninitiated, “GOAT” means “Greatest of All Time.”

Curiously, for a press corps determined to look into every nook and cranny of so many of our public figures, Mallory’s ties to Farrakhan were never addressed. She never tried to hide them. For that matter, neither did her fellow Women’s March organizers Carmen Perez and Linda Sarsour, each of whom has her own Farrakhan dealings. Sarsour, of course, is further distinguished for her rabid anti-Zionism/Semitism. No matter, Sarsour’s hatreds did not prevent her from taking a privileged place as an organizer of the Women’s March, or from being a keynote speaker at the annual conference of the Society for Biblical Literature, last November.

How exactly one can claim to be a leader of an “inclusive movement,” yet maintain ties to the Jew-hating, white-hating, gay-hating Farrakhan was never explained by any of these three women. It never needed to be, for the question was not asked.

That in itself is a major source of the problem. For decades, all you needed to do was wrap yourself under the banner of “multi-culturalism,” repeat a mantra about inclusion, progressivism, environmentalism, anti-imperialism, and anti-Zionism, and Western intellectuals gave you a pass. How you actually conducted yourself and what your true feelings were toward others was rarely scrutinized.

Now comes the rub. We actually see who these people are. Tamika Mallory did not just attend speeches given by Louis Farrakhan; she actively associated with him. She exalted him. In doing so, she forfeited the “inclusion” she claims to represent.

Former Obama adviser Valerie Jarrett and the “Root” tried to justify Mallory. They explained that in the Black community, the Nation of Islam is omnipresent and that being a leader sometimes means dealing with people whose views you do not like. Their argument is specious, to say nothing of insensitive and offensive. It’s one thing to appreciate that you cannot operate in an American inner city without dealing in some form with the Nation of Islam. It’s quite another to go out of your way to associate yourself with them, their bigoted agenda, and their racist, sexist, homophobic leader. I doubt any of Jarrett, Mallory, Perez, Sarsour, or the Root would cut any slack toward someone who praised white nationalist figures. Why should they deserve special treatment?

Nobody is perfect, and no one can accomplish anything without making compromises and dealing with certain people you would prefer not to. But there is no evidence that Ms. Mallory, Ms. Perez, or Ms. Sarsour ever considered the complications of Farrakhan. That they did not evidences a fundamental, yet uncomfortable, truth about the West in 2018. We have segregated the world into causes that are politically acceptable (I won’t even say correct, that’s too gentle) and those that are not. If your main focus is on one of those acceptable causes, you’ll be exempted from how you feel about the rest. If your main focus is on a politically unacceptable cause, you’ll be ostracized from the rest. Witness the leaders of the Chicago Dyke March banning pro-Israel gays, yet the leaders of the Women’s March straining themselves to engage with Farrakhan.

Now, with the press finally beginning to do its job, the entire Women’s March movement is in jeopardy. How easy will it be for those who oppose them to shove Farrakhan down their throats?

In two weeks, the Women’s March is sponsoring a student walk-out to protest gun violence. Imagine the position the Women’s March board has put the students of Marjorie Sherman Douglas High School in Florida, where the most recent mass shooting took place. Many of the students are Jewish. Thanks to the presence of Ms. Mallory, Ms. Perez, and Ms. Sarsour, these students now have to choose between participating in something in which many of them believe and normalizing the bigotry and racism that is so much a part of the women sponsoring the event.

All of this was eminently avoidable. What it takes, however, is for the press, the intelligentsia, and academia to do their jobs and not run interference for the indefensible.

If we insist on leaders who are heroes we will be waiting for Godot. But it is not too much to ask that we actually keep our eyes open and not ignore certain people’s baser instincts because they pass a certain politically acceptable litmus test. It’s the least we can do for our children.

About the Author
Daniel B, Markind is an attorney based in Philadelphia specializing in real estate, commercial, energy and aviation law. He is the former Chair of the National Legal Committee of the Jewish National Fund of America as well as being a former member of the National Executive Board and the National Chair of the JNF National Future Leadership. He writes frequently on Middle Eastern and energy issues. Mr. Markind lives in the Philadelphia area with his wife and children.
Related Topics
Related Posts
Daniel Markind
Comments