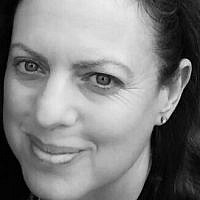 The Blogs
Avigail Gast
Apply for a Blog
Please note that the posts on The Blogs are contributed by third parties. The opinions, facts and any media content in them are presented solely by the authors, and neither The Times of Israel nor its partners assume any responsibility for them. Please contact us in case of abuse. In case of abuse,
Report this post.

Working as a Social worker with Israel’s most struggling families, my skin has gotten thicker, and tougher. My heart is broken so often that it’s not unusual for me to find myself having to pause and catch my breath after visiting our families.  The shock and intensity of dilapidation of family and home is real, a long way away from the textbook cases I once studied. Yet, last month when our organization, Tenufa Bakehila, grew to its 8th city, Kiryat Gat, devastation as I knew it was taken to a whole new level.

We came in as a team, the repair crew to access the damages, and myself as the social work, mediator. The home belonged to a grandmother, who is a mother to 2 severely mentally challenged sons and a daughter, who is a single mother to 4 young boys.

In their emotional fits the 2 sons had physically destroyed all the furniture in their home. Stepping over the rubble that was left behind, suddenly our eyes were drawn in deeper. Rodents were everywhere; alive, dead, seeking shelter in their very broken home. Their linens on their broken beds were urine soaked, and dead mice and cockroaches fell to the floor when we began lifting the piles of clothes. The walls were bashed, the plaster was falling, and ceiling was crumbling above our heads.  In trepidation, we searched for the source of the foul sewer like smell. Opening the door carefully, the sight ahead of us was horrifying, ankle deep sewage. The grandmother later described how the family had been standing in the sewage to shower for many months now.

It was no surprise that social services had visited earlier in the month and had removed the 4 young boys, as their home was no longer a safe or healthy space, and the 2 severely mentally challenged sons were institutionalized. The Grandmother and daughter were lost entirely in their own despair, left in a state of utter chaos in a house that they had once called a home.

With the holiday of Passover just a few weeks away, we knew that our goal was to bring these grandchildren home! For three weeks our team unloaded, cleared, and cleaned. Walls were patched and painted, broken furniture and rodents removed. Plumbing repaired, sewage drained, healthy space began to show its face.

One morning, the grandmother and mother who lived in such poverty that we had watched them share a can of olives for breakfast approached us with their hands shaking and presented our team with a bag from the local grocer. Their eyes showed such deep appreciation; the weight of their reality was lifting. With proud grins they waited for our reaction. Two bottles of deodorant and a box of candies never held such weight. A gift of hope, strength, and light, markers on a path we helped repave towards a brighter future ahead.

While I have received many bottles of perfume, beautiful scarves, and bags from Coach, deodorants and chocolate in their pink plastic grocery bag are presents that will be very difficult to ever beat.

About the Author
Avigail is an olah who has had to deal with the challenging bureaucratic systems in Israel. As a social worker, she now guides others to navigate the system. She shares her experiences in helping struggling families build stronger futures.
Comments