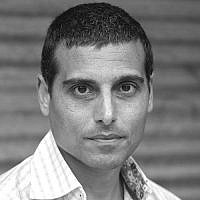 The Blogs
Manny Waks
Apply for a Blog
Advertisement
Please note that the posts on The Blogs are contributed by third parties. The opinions, facts and any media content in them are presented solely by the authors, and neither The Times of Israel nor its partners assume any responsibility for them. Please contact us in case of abuse. In case of abuse,
Report this post.

The recent public celebration by Chabad in the UK of a Torah scroll dedicated by a convicted child molester, would have to go down as one of the most horrific events in the global movement’s shameful history of child sexual abuse, cover-ups and shunning of victims.

In 2014, a member of the Chabad community by the name of Menachem Mendel Levy, received a three-year prison sentence for the repeated sexual assault of Yehudis Goldsobel, who was aged 14 when the abuse began. At his trial, the judges noted that Levy, a married father of six, was ‘arrogant and manipulative’ and that ‘no real remorse was shown,’ notwithstanding favourable character references, which were given by leading Chabad rabbis.

Last month, around a year after his release from prison, Levy donated a Torah scroll to Chabad of Golders Green run by Rabbi Yossi Simon. Levy was lauded in a major public community event which, according to reports from Chabad media outlets, was a ‘joyous’ occasion in which leading Chabad figures celebrated alongside ‘well over 1,000 men, women and children.’ Many of these same people have shunned Goldsobel and her family for speaking out about her abuse and pursuing justice against Levy. None of them thought for a moment that it was inappropriate to accept a Torah from a convicted sex offender or to celebrate his actions, let alone how Goldsobel would feel, seeing her abuser glorified in this manner.

The Royal Commission into Institutional Responses to Child Sexual Abuse has just concluded in Australia. It ran for five years and held over 8,000 private sessions with victims of child sexual abuse. It also undertook 57 public hearings, including two which focussed on the main Chabad institutions in Melbourne and Sydney in which dozens of children were abused by multiple perpetrators over decades whose crimes had generally been covered up by the people chosen to run those institutions by the Lubavitcher Rebbe or his appointed emissaries. The Royal Commission found that the practice of shunning and intimidation as carried out by members of the Chabad community towards victims and their families ‘added to their suffering and may also have deterred other survivors from coming forward.’ It also identified unique factors of Chabad communities that contributed to their inadequate responses to child sexual abuse. Some of these factors are still applicable today.

Giving evidence at the Royal Commission, Rabbi Moshe Gutnick said that instead of dancing with victims on their shoulders and thanking them for outing perpetrators and saving other children, the Chabad community turned on their victims. Well, it seems that Chabad UK has now gone one step further and dance with perpetrators on their shoulders.

It is time for the global Jewish community to wake up – Chabad has a serious child sexual abuse problem and it is not being adequately addressed. Parents within Chabad communities who do not know any better, as well as parents from outside the community who place blind trust in these religious-looking people, are unwittingly placing their children in grave danger by entrusting them to the care of Chabad. Until it addresses this problem, the growth of Chabad worldwide represents a serious threat to the safety and wellbeing of Jewish children everywhere. And as we have repeatedly seen, they are continuing to cause significant pain and suffering to many of those who were sexually abused within their institutions.

In the last week, as the controversy around Chabad of Golders Green and their sickening celebration started to reflect poorly on them, Rabbi Simon and Chabad UK issued statements which were misleading at best. Rabbi Simon simply claimed that Levy was responsible for the publicity and scale of the event. No explanation as to why he was prepared to accept the Torah in his Chabad House or for the plaque which he presented to Levy while heaping praise upon him. Chabad UK, whose logo had appeared all over the marketing material for the celebration, apparently did not know much about it either, or how so many of their leaders came to be attending and speaking at the ‘joyous’ event. And eventually, purely because of the fuss made by abuse victims (without the support we had asked for from communal organisations), Chabad committed to hand the Torah back to Levy.

Which leads me to the pitiful response of the mainstream Jewish communal organisations in this matter. As this scandal was breaking, I contacted the media, as well as my contacts at the Board of Deputies of British Jews (Board) and the Jewish Leadership Council (JLC). There was only one acceptable response to what had happened here. The communal leadership needed to unequivocally condemn the actions of Chabad and the individual rabbis concerned and demand full accountability for their despicable behaviour. They needed to call on the broader community to assist in holding Chabad to account, while offering full support to those victims who had been traumatised by the disgraceful actions of Chabad. Instead, they prevaricated and chose diplomacy ahead of the necessary response, leaving victims, yet again, unsupported, abandoned and feeling betrayed.

The Vice President of the Board, Marie van de Zyl, stated that she was ‘reassured to note that Chabad has decided not to accept the scroll’ and the JLC ‘were encouraged to read of the strong action Rabbi Simon has taken’ in rejecting the Torah scroll. Really? That’s the best they could come up with? Praise for Chabad’s handling of the matter?

Perhaps this is why The Jewish Chronicle ran with the headline ‘Golders Green Lubavitch rebuff offer of Sefer Torah donated by sex offender’ and The Jewish News printed ‘Torah completed by convicted sex offender rejected by Chabad in Golders Green.’ Both seem to have drunk some of the Chabad kool-aid as well.

When Jewish community leadership take the position that they will not condemn communal organisations under any circumstances, they become complicit in the atrocities committed by those institutions. With the UK’s Independent Inquiry into Child Sexual Abuse looming, it might be worthwhile for the UK’s Jewish communal leadership to review the experience of their Australian counterparts, the Executive Council of Australian Jewry and the Victorian and New South Wales peak Jewish bodies, who were eventually brought into the Royal Commission because of the actions of Chabad about which they had failed to speak up.

Which leads me to the response of Chief Rabbi Ephraim Mirvis, a man who I greatly admire and respect and who has taken a strong public position on the issue of child sexual abuse. I even had the honour to meet with him and maintain a good working relationship with his office. This is why I know that my criticism of his response will be taken in the constructive manner it is intended.

While he did not defend or praise Chabad like the Board and the JLC, he only went as far as to single out Levy for seeking ‘public acclaim’ and to send a message that ‘these kind of antics will never find support within our community.’

Well, it is clear that these antics did in fact find support within our community – from Rabbi Simon of Chabad of Golders Green, the leaders of Chabad UK and over 1000 Chabad men, women and children. And what more would one expect of Levy? He is not the main problem here. But the Chabad community is. What is the message that they have sent? Who is welcome in the Chabad community and who is not – the perpetrator or the victim?

I am often told to look at all the good work Chabad does. Of that there is no argument. But it counts for absolutely nought if they are unable to recognise and unwilling to address the cultural problems that make child sexual abuse rampant within their institutions. It is not enough to hand back the tainted Torah. Chabad must ask itself how it came to be that in the year 2017-18, over 1000 of its leaders, members and supporters danced through the streets with a convicted sex offender on their shoulders while his victim remains ostracised from their community. And if Chabad’s moral compass is so far gone that it is incapable of doing so, then it is incumbent upon us all, especially the broader Jewish community leadership, to point the finger at them and hold them to full account.

It is time we all took child sexual abuse seriously.

Manny Waks is CEO of Kol v’Oz, which works to prevent child sexual abuse in the global Jewish community.

About the Author
Manny Waks is an author, consultant, advocate and public speaker. He is the founder and CEO of Kol v'Oz, an Israel-based international organisation which addresses the issue of child sexual abuse in the global Jewish community. He is also an abuse survivor in an Australian Chabad-run institution. His published memoir is titled ‘Who Gave You Permission?’.
Comments