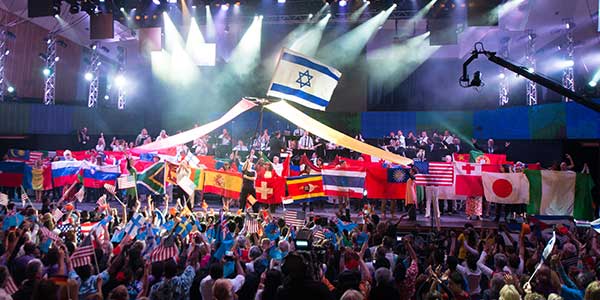 American Jews are, rightly, feeling uneasy with the visible rise in anti-Semitic incidents. Many feel threatened and alone. Yet, there is vast support from many Christians which should be a comfort.

In the summer of 2018 pastor friends in Orlando invited me to speak at a Christian event to show support for Israel. I was honored to be invited, to speak, and to build bridges among Jews and Christians with a common denominator being Israel. Sadly, much of the Jewish community that was invited did not participate. I was puzzled, however, being asked to speak about anti-Semitism. It seemed odd to have that topic as a part of a forum meant to support Israel, but I was glad to do it and planned to provide a unique insight and solutions, albeit I didn’t feel that it was terribly relevant at the time.

Less than a month before the event, eleven Jews were murdered during Shabbat prayers in Pittsburgh. This made the topic, and interest among the participants, urgent. In the course of a few months, it became sadly and scarily very relevant.

Since then, the public face of anti-Semitism has grown. Many incidents have taken place including vandalism, threats, assaults, and more murders. Jews in America are, rightly, focused on their communities, though Jews suffer physical threats, vandalism, assault, and murder in other parts of the world as well.

At times like this, Jews not only feel threatened and scared, but very alone. All the legislation, rewards, and reports in the world can’t stop anti-Semitism. I write from the perspective of an orthodox Israeli immigrant who, more than once while living in America, felt uneasy walking in public with my kippah and removed it for my safety.

But we are not alone. Working with Christians regularly, I glean strength and resolve from people who love us unconditionally, who detest anti-Semitism, and who genuinely want to see it uprooted, now and forever.

Jews should be heartened to know that there are Christians who say you can’t be an anti-Semite and be a Christian, that they are mutually exclusive. The love and support is genuine, and comes from individuals with no affiliation, pastors, and Christian organizations, all standing up for, and in solidarity with, us.

It shouldn’t be a surprise, or make us uncomfortable that for most, prayer is central. I echo this, as should all Jews. It’s normal and good to put in God’s hands things that we don’t understand or can’t resolve on our own. Beyond prayer, it’s also comforting to have Christians care enough to act.

Once, a Christian friend invited me into her office and closed the door. She shared her words carefully, emotionally, in a hushed tone. She whispered that “when” it gets too bad for Jews in the US, she and others have a network to hide and protect us. I have to admit that I was intrigued at the notion, and sincerity, as much as I thought she had a screw loose. I didn’t say that then, just accepted her concern politely.

Since then, others have shared similar offers, to protect Jews physically if it came down to that. Now, I don’t think of it as being so crazy. I just wonder why anyone would choose to stay in a place where they are in such danger that they needed a ticket for a modern Underground Railroad when they could just get on a plane and come to Israel.

There are many expressions of love and support. It’s no little thing for Christian organizations and conferences, like the one at which I spoke, to put fighting anti-Semitism on the agenda. This happens not infrequently. Many individuals also do their part.

Once, my friend, Pastor Victor Styrsky undertook something I’d never considered to show solidarity with the Jewish people and the plague of anti-Semitism and terror. He decided to wear a kippah and be a Jew for a day.

He pondered, “How does a Jewish mother or father face the dilemma of allowing their sons to go outside wearing a kippah in this 1933 world into which we have plummeted?” He was overcome by “the unexpected weight of the kippah.” He wrote, “I am embarrassed and ashamed to confess how quickly I wanted to rip the kippah off of my head, and return to my life of ease as a Gentile. My initial plan was to change my identity for four days. I barely lasted one.”

Pastor Victor recounted all his experiences in a thoughtful article that is an important read, but he summarized it as follows: “I do not have the strength to be a Jew, not even for a day, but I am humbled and honored to take my place as one of the Gentiles in the prophetic words of Psalm 126: 1-4:When the captives returned to Zion it was like a dream. Our mouths were filled with song, and our hearts with shouts of joy. And the Gentiles said, ‘Adonai has done great things for you!’

Another friend introduced me to a friend of hers who also did something extraordinary. During the recent wave of attacks in the NY area, “Marcia” undertook to call every synagogue in her extended community to show solidarity. Initially she was nervous and hesitated because she wasn’t sure how it would be received. “The response was surprise at first and then thankfulness. Some of the receptionists asked me to hold so that I could speak directly to their Rabbi. The Rabbis were thankful, and invited us (to their services). One said that he would tell his congregation about our call, and that a church (nearby) was praying for them.”

Many Christians don’t understand why Jews just don’t make Aliyah. This is out of love and respect, individually, as a people, and with admiration for everything that Israel represents. Many would make Aliyah themselves if they could.

Jews have good reason to not understand or even distrust Christians because of thousands of years of baggage that we bring with us. Some of the worst anti-Semitic atrocities have taken place in the name of “the Church.” Not to be naïve, combating anti-Semitism is not (yet) universal among Christians. But the trend is growing, and today we can feel comfort knowing that there are many Christians who will call, write a note of support, want to blend in to be one of us in solidarity, or even offer to protect us in their Underground Railroad.

I pray it’ll never come to that and that we can just receive their support with a reciprocal embrace and our thanks.