There was chaos at the registration desk – and it was wonderful. Organisers had remained nervous until the last minute whether closures of the territories, bad weather or anything else unpredictable would prevent people from arriving – but arrive they did, 170 Israelis, Palestinians and visitors. 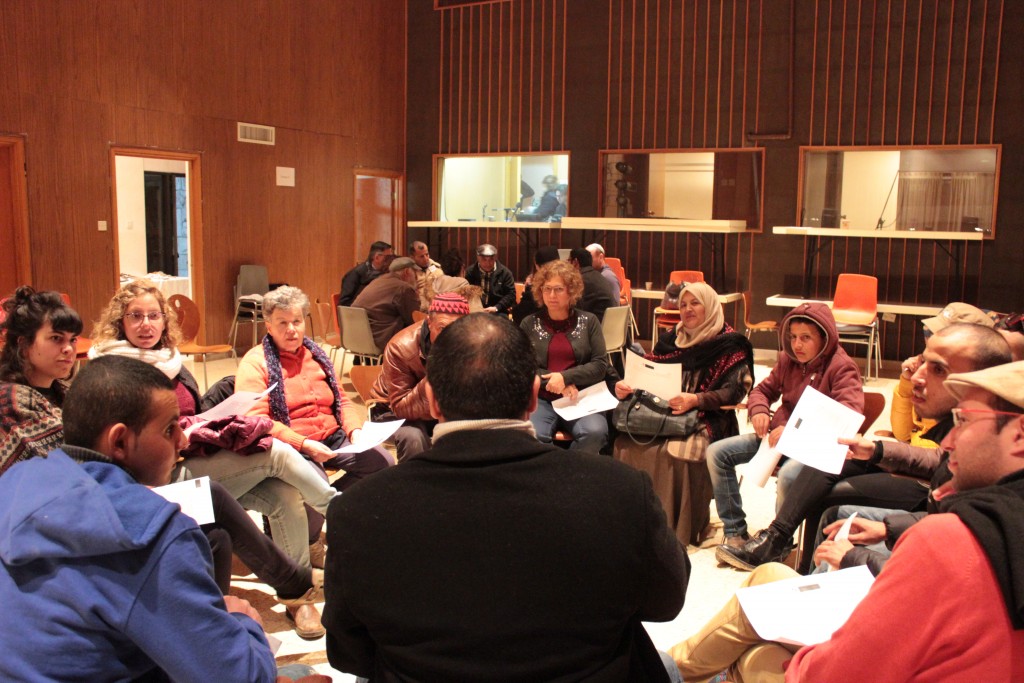 They had come to participate in the “Praying Together for Constructive Conflict in Jerusalem” event at Tantur Ecumenical Institute and the volunteers were struggling to give them all name badges and allocate them to discussion groups. People were arriving from as far afield as Nablus and Tel Aviv as well as all the suburbs and surrounding towns of Jerusalem. The layout of Tantur was not familiar and a little overwhelming – some were looking for bathrooms or coffee, others searching for friends who had arrived earlier; and we were operating in four languages (Hebrew, Arabic, English, French). For many, it was their first interfaith and intercultural event and they were not quite sure what to expect.

Gradually, order was achieved as the the foyer emptied and people made their way to the auditorium for the opening ceremony. Father Russ McDouggall, Rector of Tantur and one of the founders of Praying Together in Jerusalem (PTIJ), welcomed everyone and explained the importance of our gathering together. He was followed by Sheikh Ghassan Manasra of the Abrahamic Reunion, who blessed the gathering in Arabic, Hebrew and English. Speaking about the power of side-by-side prayer, he likened our lives to being in an aeroplane. We are all concerned as we take off and each of us prays that the journey will be safe. If G-d listens to the prayers of just one of us, all of us are saved. 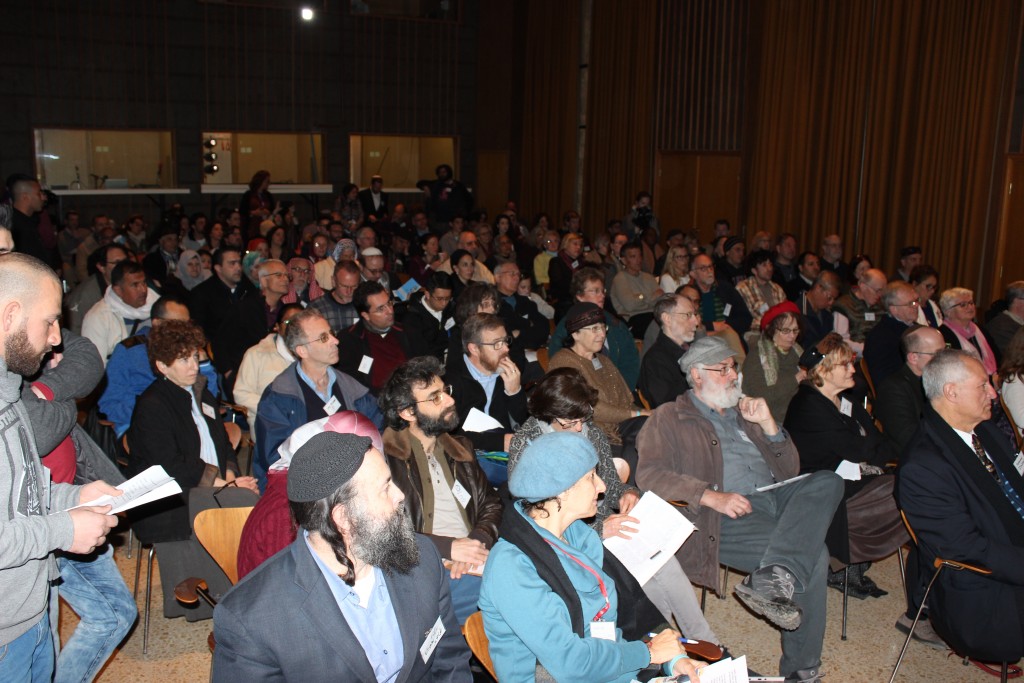 Rabbi Daniel Roth and Nurit Bachrach from Dibbur Hadash explained the context of the event. This was the first of over one hundred events to be held around the country in this week of Constructive Conflict. Although this is not the first year that the first week in Adar has been dedicated to the principles of Dibbur Hadash, which is based on the respectful way in which our sages of the Second Temple period, Hillel and Shamai, engaged in argument, it represents a breakthrough in the number of people involved.

For the first time, this year the emphasis is on interfaith constructive conflict. Religion, which is sometimes seen as the cause of conflict, can be the source of peace and increased understanding, provided that the conversations take place in the spirit of mutual respect and appreciation that difference can be enriching rather than threatening. This is when “conflict” is healthy. We do not need to or want to have the same views, religious, political or otherwise. We need to take advantage of our differences to learn from each other and share our wisdom.

I had the honour, on behalf of the Elijah Interfaith Institute and as a co-founder of PTIJ, of introducing representatives of the 13 organisations who were involved in the program, including Interfaith Encounter Association, Bar Ilan University’s Centre for Conflict Resolution and Rabbis for Human Rights. It was already time for Muslim afternoon prayers and there was some urgency to move into prayer mode. The chairs were stacked, the prayer carpet rolled out, and the crowd found their way to their respective groups. 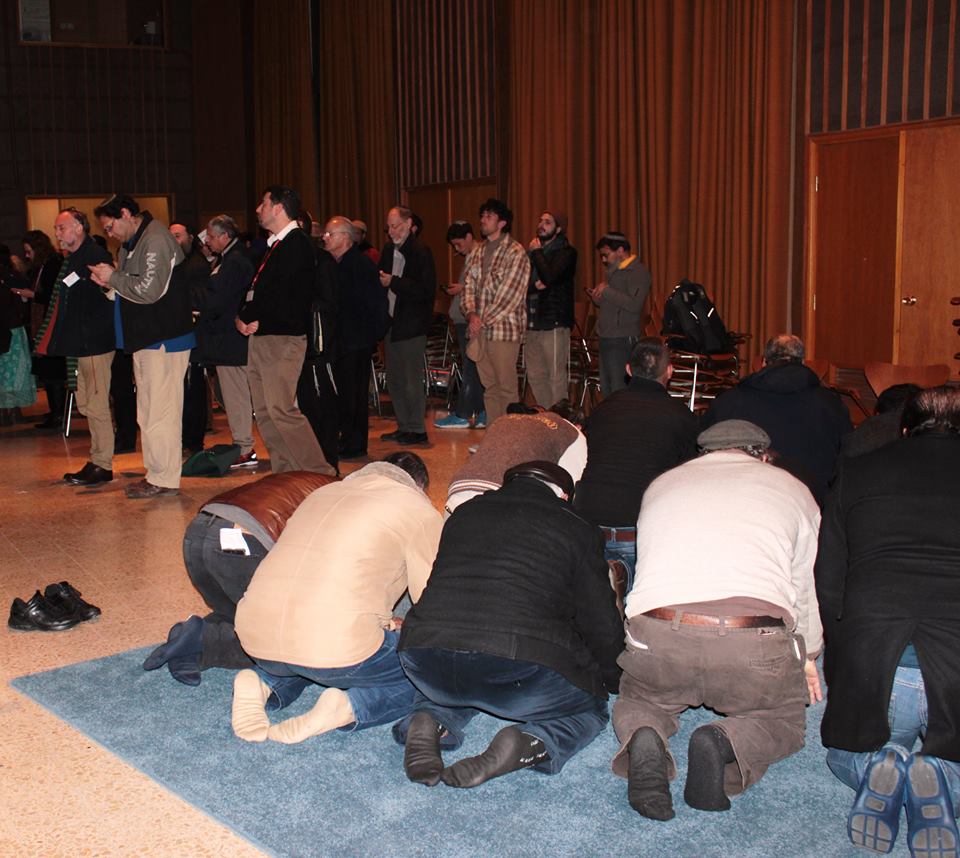 Muslims prayed facing Mecca, mainly in silence. Two groups of Jews gathered, one facing Jerusalem and praying the regular Maariv (evening service) and one in a circle, singing a selection of Psalms and other readings dedicated to Peace. Christians recited readings and sang hymns, their beautiful tunes blending with the other voices. A small group chose to meditate rather than pray. There was space for them, too.

As the prayers finished, people made their way to rooms around the beautiful grounds of Tantur to join one of fifteen study circles, led by volunteer facilitators. Before they engaged with texts, participants took the opportunity to get to know one another a little better by sharing their personal experiences of unhealthy disagreement.  Some groups operated in more than one language, which enabled Israelis and Palestinians to share their experiences and ideas with each other.  The sounds of happy conversation, including laughter, emanated from many of the rooms. 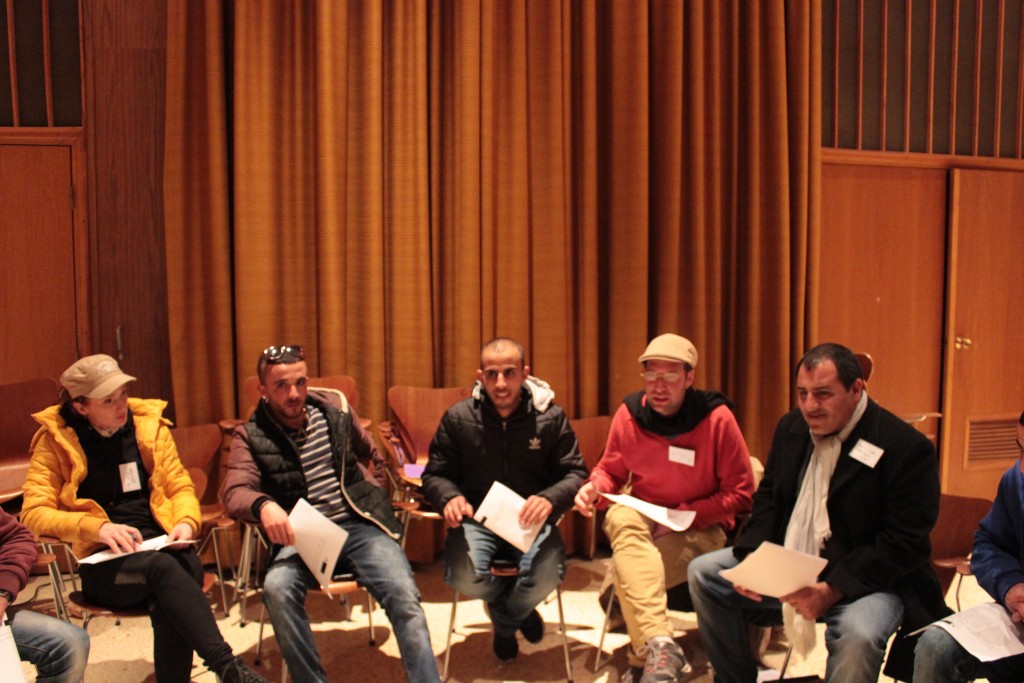 All the facilitators had participated in a training session to familiarize themselves with the selection of texts, one Jewish, one Christian, one Muslim and one from the field of secular conflict resolution.  In most cases, they worked in partnership with a co-facilitator from another faith. Under their guidance, participants found a learning partner, in order to employ the traditional Jewish methodology of chevruta, learning in pairs.  It was an intense experience of seeing texts through the eyes of another. And it was all too brief.

Praying Together in Jerusalem concludes all its gatherings with a final circle which brings everyone together. In the courtyard, nearly two hundred people joined the circle, where Professor Mohamad Dajani, whose family have been the keepers of Nabi Daud-King David’s Tomb offered his blessings and support that we continue our monthly meetings at David’s Tomb. Eliyahu McLean and Ghassan Manasra led a shared prayer for peace – a powerful moment with everyone chanting together. The formalities ended with two minutes’ silence, with each person reflecting on the power and beauty of the event in which they had participated.

It was already late and people were free to leave – but few did. Enjoying a light meal and the pleasant background music of an oud player, people stayed well into the night, talking with one another. It was beautiful to see the efforts being made for people to find interpreters, so that they could meet new people in a relaxed atmosphere. Event coordinator, Raanan Mallek of Tantur, and volunteer coordinator, Allyson Zacharoff a student at  Pardes, could finally relax and look on with satisfaction at the crowd. 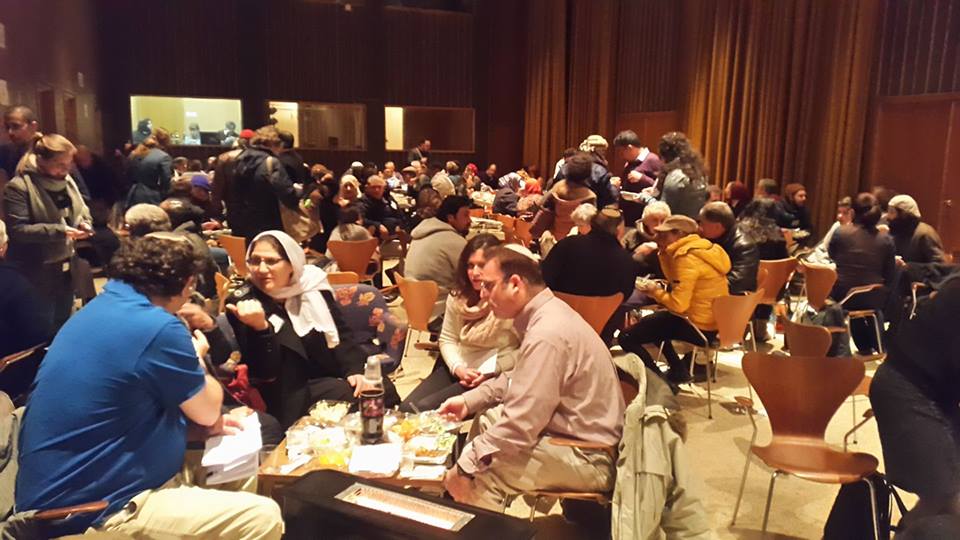 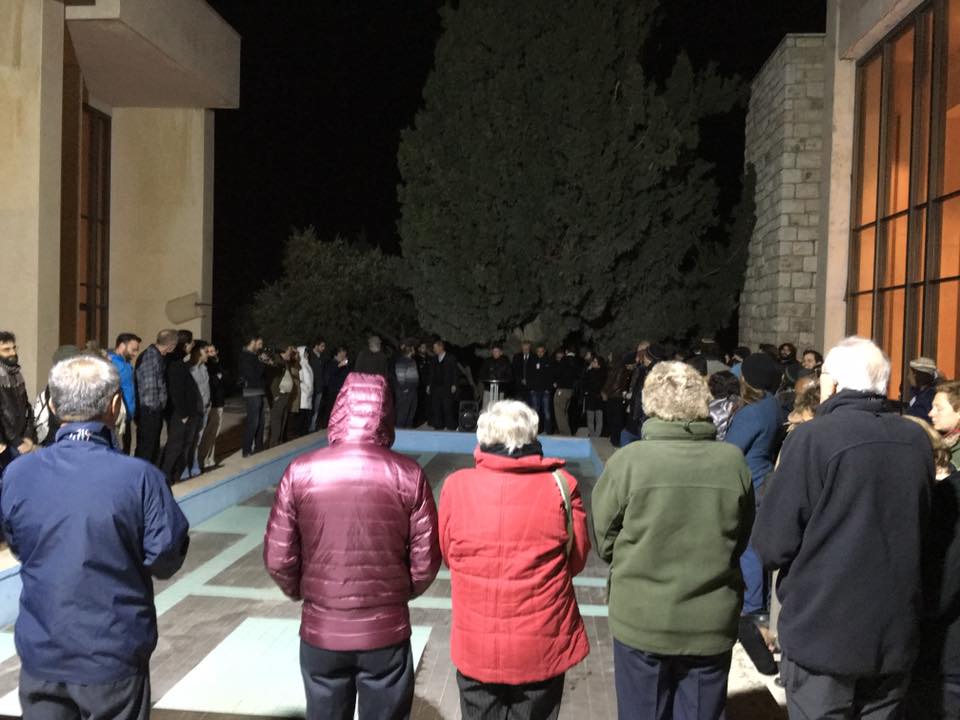 “Praying Together for Constructive Conflict in Jerusalem” achieved many things. A coalition of thirteen interfaith and peace organizations worked together, without any sort of rivalry. Participants made new friends and had profound conversations with people whom they would not have an opportunity to meet in their daily lives. Texts were shared that showed both common values and subtle differences between the approach of the three Abrahamic traditions to the question of respectful disagreement.  There was increased awareness about the importance of disagreeing in a healthy way – not eliminating diversity of opinion but embracing it.

The event launched a nation-wide week of activities.

PTIJ meets on the last Thursday of every month.