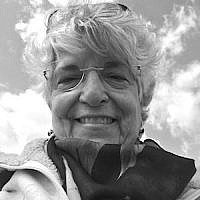 The Blogs
Helen Elnekave
A Retired Pediatric Psychologist
Apply for a Blog
Advertisement
Please note that the posts on The Blogs are contributed by third parties. The opinions, facts and any media content in them are presented solely by the authors, and neither The Times of Israel nor its partners assume any responsibility for them. Please contact us in case of abuse. In case of abuse,
Report this post.

Should we be punished for breaking the law? Should there be laws at all? After all, punishments are painful to the perpetrators and heartbreaking to those around them. Former Assistant Director of the FBI, Andrew McCabe recently violated a number of laws and was deprived of his early-retiremet pension. As a senior citizen, I commiserate with his loss. But what is more important in deciding his case – feelings of sympathy for him or upholding the law?

Imposing the law without taking into account extenuating circumstances is cruel and unacceptable. That is why the guilty driver in fatal automobile accidents is not usually charged with murder, but with manslaughter, a less serious charge. Our Sanhedrin was exceptionally careful about handing down harsh decisions. The Mishnah states that a Sanhedrin that executes just one person in seven years is considered bloodthirsty! Ignoring the law, however, leads us down the path to societal chaos.

The plight of immigrants (that of refugees is a different subject) who flee economically stagnant countries and want to make a better life for themselves in Israel, the United States or in Europe is forcing us to find a balance between imposing the law and remaining sympathetic and understanding of people’s circumstances and needs. Stories of families terrified of being deported move me. But then I ask, What about those many potential immigrants, who also yearn for a better life, but who have chosen to follow the law and have been waiting years for their immigration applications to be approved? To whom should we give preference – those abiding by the law or those flaunting it? How do we solve this problem in a humane way? It is reassuring that so many citizens care about the plight of immigrants and are helping them. Indeed, as Jews we are commanded to do so. But I worry that the balance between sympathy/compassion and the law is trending dangerously against the rules and laws of society.

The changing relationship between feelings and laws in society is reflected in the structure and nature of family relationships. Today too many parents feel their primary role is to become their children’s best friends. While the motivation may be (or not) understandable — many worry that making too many demands and/or imposing significant consequences for unacceptable behavior will cause irreversible emotional damage to their children — relinquishing their roles as maintainers of order in the home has significant negative effects. Indeed, their children, understand their error and spend much emotional energy searching for those limits. Ask any elementary school child which teachers they prefer and they inevitably choose “strict” teachers. Children thrive on order, clear limits, and reasonable expectations that test the limits of their competence. When these circumstances are absent, and the family environment is chaotic, children develop anxiety disorders.

Laws must be tempered by compassion. Making decisions, legal or otherwise, based on feelings alone can be dangerous. “Count to ten” we are often advised before making a decision. How many of us have regretted decisions made impulsively, based on feelings that seemed justified at the time. An extreme example occurred recently when a nine-year-old became angry and frustrated because his sister refused to relinquish their game control. His feelings got the best of him and, believe it or not, he shot and killed her! Yes, an extreme example, but one that reflects the volatility of feelings and why they alone can not be relied upon for making important decisions.

Courts of law take their tasks seriously. Sometimes a perfectly fair trial will result in an unfair result. The law is not without its disadvantages, but without laws, we would be living in chaos.

And so Mr. McCabe will receive his “consequence” for unlawful behavior and immigrants who enter a country illegally will face theirs.

The problem of illegal immigration, in particular, has highlighted the natural tension that exists between compassion and the rule of law. We must, however, vote in favor of the rule of law, even if some people may suffer because of seemingly unfair decisions. The alternative is too frightening. Neil Gorsuch, the newly appointed Supreme Court Justice understands this dilemma: “A judge who likes every outcome he reaches is very likely a bad judge…stretching for results he prefers rather than those the law demands.”

Concern for the greater good must rule the day, even if the implementation of certain laws cause pain for some.

About the Author
SINCE MAKING ALIYAH IN 1983 AND REMARRYING AN ISRAELI IN ISRAEL IN 1985, I HAVE BEEN SPLITTING MY TIME BETWEEN THE US AND ISRAEL. I WAS BORN IN NEW YORK CITY IN 1942, GRADUATED FROM BARNARD COLLEGE IN 1963, MARRIED AND HAD TWO DAUGHTERS, WHO HAVE GIVEN ME FOUR GRANDCHILDREN, WHO RESIDE IN THE US. MY SECOND HUSBAND'S CHILDREN AND GRANDCHILDREN LIVE IN ISRAEL, HENCE THE "BACK AND FORTH." I COMPLETED MY PHD AT THE UNIVERSITY OF NORTH CAROLINA-CHAPEL HILL IN 1981 AND SUBSEQUENTLY COMPLETED A TWO-YEAR POSTDOCTORAL FELLOWSHIP IN PEDIATRIC PSYCHOLOGY THERE IN 1989. AFTER MAKING ALIYAH IN 1983, I BECAME THE FIRST EXECUTIVE DIRECTOR OF OSCAR VAN LEER'S SPECIAL PROJECT, THE JERUSALEM CHILDREN'S COUNCIL, THE PRECURSOR TO THE CURRENT NATIONAL ORGANIZATION. PRIOR TO MAKING ALIYAH I WAS A CONGRESSIONAL FELLOW OF THE SOCIETY FOR RESEARCH IN CHILD DEVELOPMENT (SRCD) AND FOUNDED THE SELECT COMMITTEE FOR CHILDREN AND FAMILIES IN THE US CONGRESS.
Comments