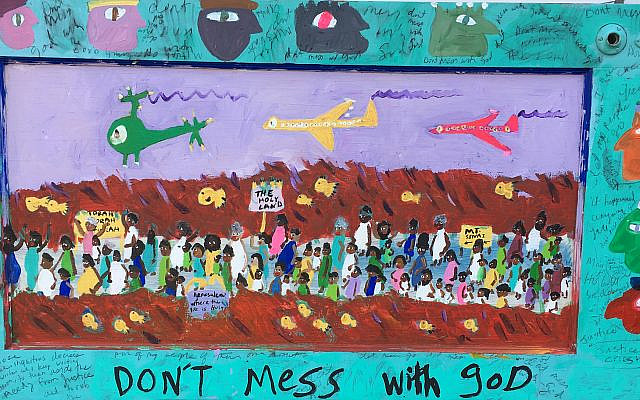 The summer before COVID19 shut the world down, my seventy-something friend Nick told me the following story. Only he didn’t just tell me. He acted it out, with accents, facial expressions, pauses, gestures, and intonation.

Once upon a time, when he was a struggling actor in New York City, Nick made ends meet by working as a taxi driver. One day he picked up an elderly Jewish man. Speaking in a heavy Yiddish-Viennese accent, the man directed Nick to turn right, left, left and then right. Two minutes later, when Nick pulled up to a small Orthodox shul, the old Jew said: “Nu, you are Yid?” Nick admitted he was. “You’ll come in and make a minyan?” the old man said. Nick said he couldn’t. Just for starters, there was no place to park. What if he got a ticket? “So leave the meter running, I’ll pay,” the old man said. “Do a mitzvah, be a Jew.”

Nick, pausing, returned to the present. “And that’s when I knew I was a Jew.”

As for me, I never really had any one ah-ha moment, Jewishly or otherwise, but as Nick finished up his one-man performance, I had a whirlwind brainstorm of such amazing excellence and insight that it had to have come from nowhere else but On High.

Why not conduct a weekly workshop at our synagogue on the subject, broadly, of “When I Knew I Was A Jew”? Shmaltzy, but catchy. Nick and I would do it together. Nick had just retired as president of the board. He had time. More to the point, everyone loved him. It would be like a classic writers’ workshop except that instead of writing for the page, we’d be writing for the stage. Participants would discuss and then write down their stories regarding their relationship to, involvement in, resistance around, or embrace of Judaism. We’d have young people and old people and everyone in between, a multi-generational schmooze-fest. The youngsters would “adopt” the oldsters as honorary grandparents; the middle-aged would embrace the wisdom of the children, and when all was said and done, who wouldn’t want to embark on such a project? When we eventually worked up enough good material, the group would take their stories to the stage and read/act them, much like Eve Ensler did with “The Vagina Monologues.” The debut performance of “When I Knew I Was A Jew” would be at our own synagogue. After which we’d continue to polish and add, until finally we’d take the whole shebang on the road, appearing at other synagogues as well as Jewish old age home, Jewish day schools, JCCs, and summer camps. I could taste it with such specificity that it was like high end dark chocolate in my mouth. Nick had theater chops; I’m a writer. What could go wrong?

I mean other than everything, starting with the first meeting, when a handful of distinctly non-youthful Jews showed up to say that they weren’t even a little bit sure what the workshop was supposed to accomplish.

At the first meeting—with the whole panoply of people who, even if you’ve never met them, you’ve met them at your own synagogues and in your own families–we went around the table, talking about how, why, and when we came to embrace being Jewish. People told stories about their Yiddish-speaking grandparents, their experiences as choir boys at church and how it slowly dawned on them that they felt more at home in Judaism, their horror of antisemitism, their childhoods in the Bronx, and even their conversions, but getting to the nugget of the thing—the story, the narrative—was elusive.

Why choose—as in our day and time we all do—to live, in some form or another, as a Jew? Is it a sense of belonging? Family? Tribe? Ethics? The literature? The food? Jewish civilization writ large? Israel? Jewish prayer? The Hebrew language?  Pride in Jewish accomplishment? Or perhaps the never-ending and confounding back-and-forth, with few if any assurances, that Judaism demands? Was it because of your bubbe and zayde? A need to honor the six million? The memory of the Italian boys who bullied you in your working-class neighborhood in Brooklyn? Some combination? None of the above? All of the above? What? Or perhaps the stories lay in not feeling the tug of Judaism but engaging with it anyway? Or that in a post-Holocaust world anyone who believes in an omniscient deity is a putz but the alternatives are worse? I asked questions; I pushed; I probed. You know what I got? Gornisht is what I got.

People talked about all kinds of things, of course, including massive amounts of synagogue gossip, but when it was time for the rubber to hit the road, it didn’t. By the third meeting, the original small group had halved. By Hanukkah one of the workshop members openly hated me. By the time the first snow began to fall, the interest in the project consisted of me and Nick, only Nick wasn’t sure.

And then COVID shut us down, relieving me of responsibility for the utter failure of the project. And a full year later, and still in shut-down, I’m still not sure why things went south so soon, though I have theories.  First, unlike me, not all Jews think much about being Jewish or why they bother with it. It’s as much a part of them as their skin. Second, kids don’t want to hang out with oldsters, ever. Third, not everyone who shows up at a workshop likes being pushed and probed to reveal their inner workings. Also, I have no patience for anything, ever.

But it was all so real to me, and so within reach—the stories, the staging, the elderly Jewish members of my synagogue dressed in black slacks, reading from notebooks under simple lighting—that I just can’t let it go.

My own Jewish story would start: “My father was the Jew in the family.” Come to think of it, I’ve already written that book.

We Jews are, of course, not only the People of the Book (or the People and the Books, as per Adam Kirsch, author of The People and the Books) but we pretty much wrote the first sustained written narrative. Which was followed by so many books on so many topics written by so many Jews in so many languages that it makes you dizzy just to think about it. We are a talky, argumentative people: so why is it so hard to talk about why those of us who live within Judaism, however precariously or non-traditionally, choose to do so. There are perhaps hundreds of superb memoirs and autobiographies—Singer’s astonishing In My Father’s Court springs to mind—but I came up short when it comes to books for a non-Haredi audience about why we who decide to, decide to live as Jews. So I turned to my brother-in-law, a journalist in Jerusalem, who suggested An Orphan in History by Paul Cowan; I am Jewish: Personal Reflections Inspired by the Last Words of Daniel Pearl; Why I Am a Jew by Edmond Fleg; the writings of the philosopher Franz Rosenzweig; and, most pertinently, the movie “The Hebrew Hammer,” with its hero’s admonishing to the neighborhood kids to “stay Jewish.”

To this day, I think of my late grandfather who lived entirely within a traditional, conservative, and close-knit Jewish world, in Baltimore. For him, it was simple: Judaism and family were the same thing.

About the Author
Jennifer Anne Moses is the author of seven books of fiction and non fiction, including The Man Who Loved His Wife, short stories in the Yiddish tradition, to be published on March 1. Her journalistic and opinion pieces have been published in The New York Times, The Wall Street Journal, The Washington Post, the Chicago Tribune, The Atlanta Journal Constitution, The Newark Star Ledger, USA Today, Salon, The Jerusalem Report, Commentary, Moment, and many other publications. She is also a painter.
Comments