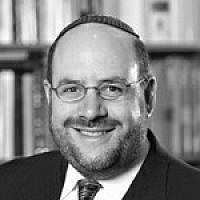 The Blogs
Steven C. Wernick
Apply for a Blog
Advertisement
Please note that the posts on The Blogs are contributed by third parties. The opinions, facts and any media content in them are presented solely by the authors, and neither The Times of Israel nor its partners assume any responsibility for them. Please contact us in case of abuse. In case of abuse,
Report this post.

(New Jersey Jewish News via JTA) — This past week was exhausting, but not in the way I’ve become accustomed to as the father of three children in a demanding profession.

It began with the uplifting gala of the Masorti Foundation and a conference celebrating 30 years of women’s ordination, but was immediately followed by the soul-draining news that the ultra-Orthodox mayor of Rehovot, Israel, decided to cancel the b’nei mitzvah ceremony of children with disabilities because it was to be held in a Conservative synagogue.

At the Masorti event, Rabbi Gordon Tucker spoke about the Zionism of love, a new relationship paradigm for the times we find ourselves in. This Zionism is built upon the tenets of any good relationship: quid pro quo, reciprocity and symbiosis. It receives, honors and returns the love it is given.

Yet what took place in Israel is the hallmark of a toxic or abusive relationship. The response to our love was a smack in the face.

For the past 25 years, the Masorti Foundation has been the sole provider of bar and bat mitzvahs to children with disabilities, a distinction of which we are proud. Such events are the essence of a kiddush Hashem, an act that sanctifies God’s name. At the United Synagogue of Conservative Judaism, we have a deep commitment to the mitzvah of inclusivity. Funded by the Ruderman Foundation, one of our initiatives is to make our kehillot accessible to every worshipper regardless of ability or need.

The shocking ruling by Mayor Rahamim Malul struck a deep blow; its cynicism and heartlessness was felt around the world. Trammeling on a moment of holiness, it was the essence of a chilul Hashem, or desecration of God’s name.

It left me personally heartbroken and spiritually depleted.

The Rehovot incident is merely the latest in a string of insults against non-Orthodox Jews in Israel. Although Rabbi Tucker can preach movingly about the necessity of promoting the Zionism of love, we are being confronted with the Zionism of fear and prejudice, a Zionism that has been hijacked by an extremist, coercive and inflexible rabbinate.

To be a committed Conservative or Masorti Jew in Israel is to be subjected to a series of assaults against your religious freedom. Some are physical, as evidenced by last month’s shocking attack by haredi Orthodox men at the Western Wall, where a dear friend had his chest and head pounded. Others are to human dignity, as in this past week’s case.

I cannot help loving Israel, but lately it seems that Israel simply does not love me back.

Israel doesn’t want our rabbis. Israel doesn’t want our synagogues, our schools, our camps or, evidently, our brand of open, tolerant, pluralistic Judaism. We have to beg for funding at every turn. Yet if the campaign against non-Orthodox Judaism in Israel is old news, why keep kvetching about it? Why even try to build our communities there, to fight for our foothold in the increasingly complicated State of Israel?

It is not for my personal sake, nor even my children’s sake — they’re all girls, so the stakes are high.

It is for Zion’s sake, for the viability of Israel herself. The Zionism of fear and prejudice leads us to a dark and narrow place, obscures the horizon, cuts off the blood supply to the heart of the Holy Land, hastens the expiration date of Herzl’s dream.

L’ma’an Zion lo echesheh — For the sake of Zion I will not be silent.

Awash in these feelings, I sat in shul this past Shabbat marveling at the relevance of the Torah’s teaching. This past week we read the well-known verse that so beautifully encapsulates Judaism’s ethic of kavod ha’briot — respect and dignity for God’s creatures: “You shall not curse the deaf and you shall not place a stumbling block before the blind. You shall fear your God; I am the Lord.” (Leviticus 19:14)

This verse is one of a number of instances where God takes the position of personal advocate of the vulnerable individual, reminding the reader that their actions are being observed and overseen. I wondered how Mayor Malul might trammel upon the eight months of intense preparation undertaken by Rabbi Mikie Goldstein of Congregation Adat Shalom-Emanuel, the children, their families and a variety of volunteers, and then attend synagogue on the very Shabbat where we are commanded to protect and respect the deaf and blind.

Did he hear the Torah’s message? Is it possible that he is blind to the chilul hashem that he committed, deaf to the disappointment of the children and their families?

I worry that the incident in Rehovot, the assaults on non-Orthodox Jews davening at the Kotel, the denigration of Conservative and Masorti rabbis and other events, are rapidly becoming the new normal. We cannot allow this.

About the Author
Rabbi Steven C. Wernick is CEO of the United Synagogue of Conservative Judaism.
Comments