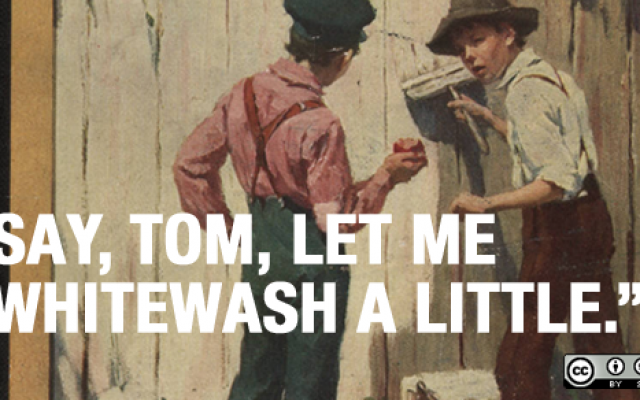 Erasure can take many forms: cultural, historical, epistemological, and anything in between. Every marginalized population experiences it in one form or another. It can almost be considered an inevitable fact of life for us.

However, a commonly overlooked aspect of erasure is that, in many cases, we inadvertently perpetrate it against each other, and ourselves, often without realizing it, or even caring.

One prominent example of this would be Ashkenormativity, defined as the prevailing emphasis on Ashkenazi history and diaspora culture (Hasidic Ashkenazi culture in particular) to the exclusion of other diaspora cultures and histories.

* The assumption that all Jews are Ashkenazi.

* The assumption that all Jews know Yiddish.

* Jewish schools teaching children to learn and speak Hebrew in the Ashkenazi way only.

* Erasure of Ashkenazi discrimination against non-Ashkenazi Jews, and even certain Ashkenazi groups (e.g. Soviet Jews, religious Jews), who were confined to ma’abarot.

* Ignoring the history of other diaspora Jewish populations – especially Sephardi and Mizrahi Jews whose exile from Israel was largely confined to other parts of the MENA – and their contributions to the community and to the State of Israel.

Contrary to what some may believe, none of this benefits Ashkenazi Jews in any material way. All it does is engender intra-Jewish division and hostility, thereby weakening us as a nation and diminishing our credibility. It airbrushes an appreciable swath of Jewish history and experience – components essential to any holistic understanding of Klal Yisra’el and of antisemitism itself – out of the picture.

The drawbacks are endless. And this benefits no one but the antisemite.

But this should all be common sense. What is my point here?

It is that, sometimes, the erasure goes in the other direction as well. As is clearly the case with the JIMENA lesson plan that was recently adopted by the California Department of Education (CDE) for its Ethnic Studies Model Curriculum (ESMC), which will shape the curriculum on Ethnic Studies for California and the rest of the country for decades to come. The text book and appendices produced and published by America’s most populated state will be mass produced for the whole country and America’s school children’s ideas about Ethnic peoples will be massively informed by this work.

Having read JIMENA’s lesson plan, I submit that the language contained therein erases Ashkenazi Jews in a number of deleterious ways.

1. Although the document acknowledges all Jews as indigenous to Israel, it is interlaced with language and omissions strongly suggesting the opposite. To wit, it is heavily implied throughout the document that only Sephardic and Mizrahi Jews are indigenous to the Middle East (e.g. by repeatedly referring to them as “the indigenous Jews”), engendering the conclusion that other ethnic Jews – specifically Ashkenazim – are not. At best, this is merely confusing. At worst, it reads as a wink to antisemites who think Ashkenazim are “Europeans” with only a tenuous, distant link to the Middle East at best (that is, of course, to say nothing of what that implies for Ethiopian Jews, Cochin Jews, etc).

2. It uses the terms “Middle Eastern-American” and “Asian-American” in a way that clearly excludes non-Sephardi/Mizrahi Jews, despite our collective indigeneity to Israel (which is in the Middle East), thereby reinforcing number 1.

3. It essentially calls Ashkenazim “East Europeans” (e.g. “many Jewish Americans trace their ancestry to Eastern Europe”), thus reinforcing numbers 1 and 2. This is compounded by the fact that JIMENA’s lesson plan omits any mention of Ashkenazi origins in Israel, or any history further back than our time in Europe.

4. “list the various subethnic groups under the Jewish American column such as Ashkenazi/Eastern European, Mizrahi & Sephardic/Middle Eastern and North African, Iranian/Persian, Israeli, Ethiopian, Russian, and Latinx.” This, of course, would be fine it said something like “all these groups originated in the Levant and left in all directions mostly as a result of invasion and conquest”. But it does not do that.

Obviously, this will not do. These are serious problems and they need to be fixed right away. My reasons are as follows…

1. Jews are an indigenous ethnic group of the Levant – a fact acknowledged in the lesson plan. Ceding to the notion that Ashkenazim can be properly classified as “European” undercuts/undermines this acknowledgement and suggests that we are, in fact, “indigenous” to Europe.

2. More to the point, excluding Ashkenazim from the Middle Eastern/Asian-American curriculum erases our Middle Eastern ethnic identity, origins, and 4,000 years of civilizational history within the Levant, within the land of Israel. It amounts to a revisionist re-write of the entire nature of our presence in Europe.

Europe is not where we originate. We do not have indigenous ties to Europe. Our origin is not in Europe. What we have is a history of exile, persecution, and slavery in Europe – as a foreign and oft-persecuted and oppressed Middle Eastern people of color.

3. It erases our more recent history of anti-Semitic racism in the United States, which is still ongoing. To wit, Ashkenazi Jews were categorized as Asians (alongside other West Asian populations i.e. Syrians, Arabs, Afghans, Iranians) when we first arrived here and were nearly denaturalized for that very reason.
Needless to say, these are experiences that European-Americans (non-WASP or otherwise) do not share with us. To the contrary, these experiences are much more likely to be shared with other Middle Eastern-American groups.

4. Categorizing us as “European” is inconsistent with the way other ethnic groups are categorized The Census categorizes ethnic groups based on ethnic and racial origins, not where their family/families recently lived. For instance, it is highly unlikely that an African family who migrates to the US from the UK, after some generations of living there, would be categorized as European-American. And why would they? Yes, they clearly have a recent history in Europe (and may have even picked up some European genetic admixture during their time there), but they are not ethnically European in origin. Their ethnic origins are African. Likewise, the ethnic origins of Ashkenazim are not European. They are Middle Eastern. The fact that our exile was a bit further back does not change where we’re from. 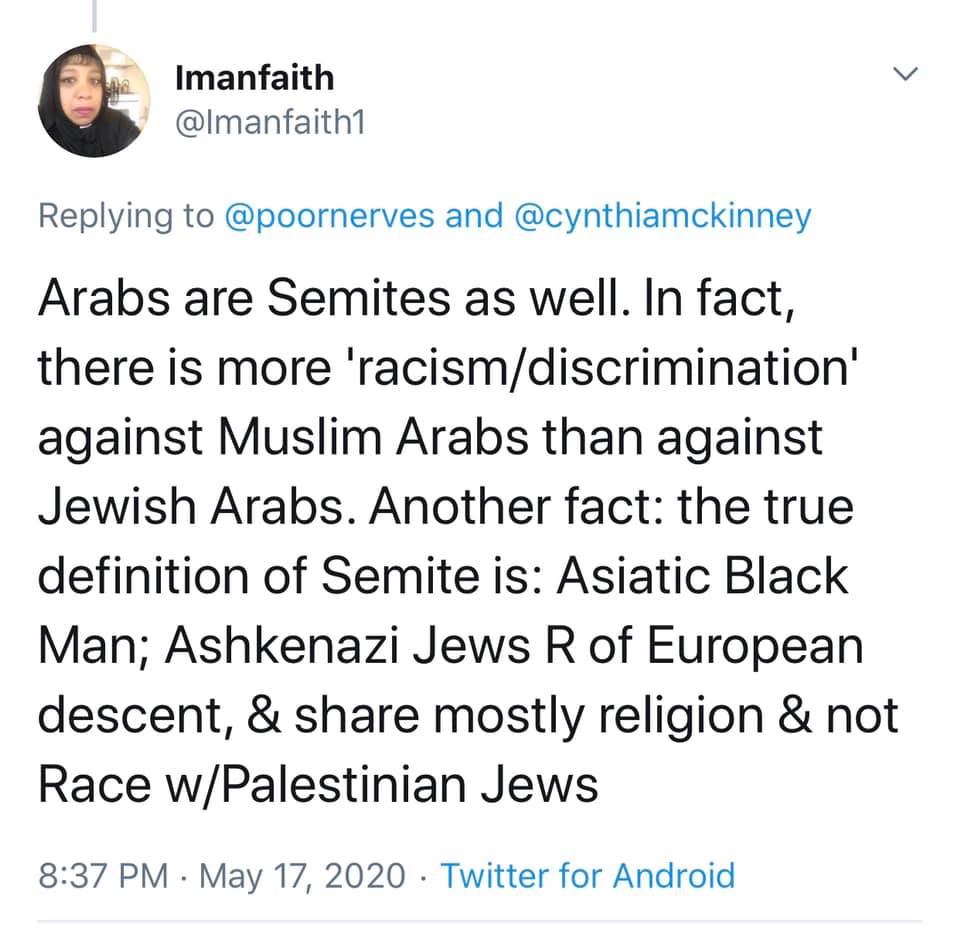 Just a reminder that Ashkenazim have to hear drivel like this every single day. And the lesson plan that was just accepted isn’t going to help us one iota. The only thing it will do is embolden antisemitic cretins like the one pictured above.
Source: My own screenshot

6. Lastly, categorizing us as “European” will leave us with virtually no coverage within the curricula at all since, for very obvious reasons, there is no “European-American” section. As I recall, the impetus for going after the proposed model ES curriculum was that it sought to group Jews qua Jews under “non-WASP” “European-American”.

JIMENA’s recent success changes this…. for Sephardim and Mizrahim. But for Ashkenazi Jews, it changes absolutely nothing.

American Ashkenazim will still be inaccurately listed as “non-WASP Europeans,” and still inaccurately represented as a “European people” who were “once” oppressed, but are now somehow “privileged whites;” despite all Jews in the USA (not just some sub-set of us) being the per-capita most targeted group for hate crimes in the USA going back for at least the last 20 years.

7. Lastly, eliding us into the “European-American” section materially distorts the story of Ashkenazim and works to negate our status as an ethnic minorities. Since we’re being lumped with “other whites,” students will be inclined to treat our experiences as “less important” – if not “over-exposed” and “over-privileged” – compared to “real” ethnic minorities. In this scenario, Ashkenazim demanding due recognition for the many centuries of suffering, torment, and Orientalist racism at the hands of an often rapacious, white supremacist and Jew-hating European society will be seen in the same light as white people demanding a White History Month. This history is far too important, and it does not deserve to be trivialized in this way. Nor do we.

As things stand, Americans tend to view antisemitism through a postmodern (antisemitic) lens, wherein it is little more than a bizarre and freakish – if not “entertaining” – sideshow to white supremacy, rather than the virulent and monstrous manifestation of white supremacy it actually is. Antisemitism against Ashkenazim is white supremacy *in action*, not a divergence thereof. It is not some weird sideshow of “white infighting”. It is, always has been, and continues to be a dire, pervasive, lethal, and murderous form of Orientalist racism.

Ergo, there is no reason – literally no reason – to categorize Ashkenazi Jews separately from Arab-Americans, Iranian-Americans and, even more so, from Sephardi and Mizrahi Jews.

We should bear in mind that the inherent falsehood of these antisemitic narratives has not stopped them attaining almost worldwide popularity, nor from being perpetuated on the ground level and in the highest echelons of our academic institutions. They are also far too dangerous for us to allow these ideas to spread unchecked, and be transmitted to future generations.

Jewish orgs, especially those who (like JIMENA) have been made a representative voice for the entire Jewish community on this matter, have a responsibility to take action and put an end to this. I understand that JIMENA’s main focus is on uplifting Sephardi and Mizrahi Jews, and it is not at all my intention to embarrass or humiliate them here. But this matter has implications extending far beyond JIMENA’s usual scope, impacting other Jewish communities as well, and much of what I saw within the existing lesson plan is simply inexcusable.

It is possible to uplift Sephardi and Mizrahi voices without grouping Ashkenazim with their colonial oppressors. Doing so will not cure Western academia of antisemitism. Nor will it uplift Sephardi, Mizrahi, or any other Jews.

This does not benefit anyone except the antisemite.