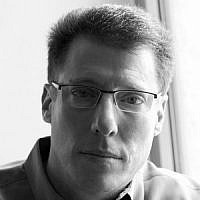 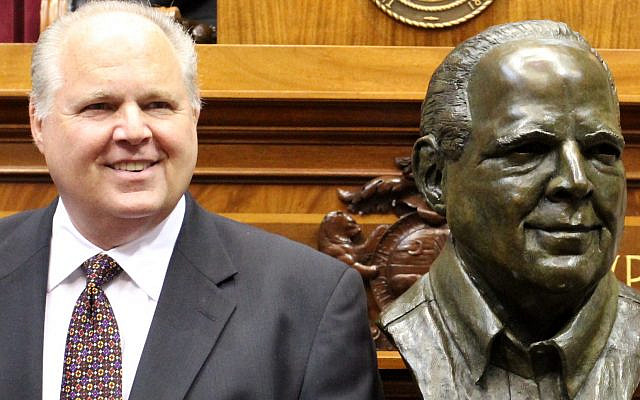 Rush Limbaugh, next to his bust, in 2012. (Progress Missouri, Wikipedia)

When Joe Biden was elected president of the United States, it took Benjamin Netanyahu almost five days to issue a public congratulation, making him among the very last heads of state to do so. The French president, German chancellor, and British prime minister all beat him to the punch. But it took Netanyahu just one day to publicly share his condolences with the family of Rush Limbaugh.

We’ll get back to that. First, some Talmud.

One of the best-known stories in the entire Babylonian Talmud is that called the “oven of achnai” (Bava Metzia 59b). It’s a very popular tale in liberal Jewish circles, because it seems to suggest that God approves of human beings determining what Jewish law (Halakhah) should be, even over the objections of God Himself.

Suddenly, a voice came from the heavens and said, “Why are you disagreeing with Rabbi Eliezer, as the Halakhah always follows him?” Rabbi Yirmiyah, though, speaks to God, essentially saying, “You stay out of this.” After all, the Torah says, “It is not in heaven” (a phrase Rabbi Yirmiyah takes wildly out of context), so “this isn’t Your business anymore.” How did God react? The prophet Elijah said that when God was pushed out of the argument, He laughed and said, “My children have defeated Me, My children have defeated Me.”

And that’s where we often stop telling the story. After all, the point has been made, no? Determining the Halakhah is no longer God’s role — it is the role of human beings.

Now, that claim is obviously highly controversial in a variety of Jewish circles, but let’s leave aside the questions of whether that’s the correct reading of the story and whether any story matters at all in determining Jewish law. What matters for us is what happens later in the story, in a part of the tale that we study much less frequently.

The story is long and a bit complex, but the gist is as follows. After they reject his view, the sages declare impure everything that Rabbi Eliezer had ever declared pure, and they essentially excommunicate him. (In today’s language, we’d say they “canceled him.”) Rabbi Akiva goes to share the horrifying news with his teacher, Rabbi Eliezer. The love that Rabbi Akiva shows his master and the heartbreak that Rabbi Eliezer feels literally move you to tears, no matter how many times you study the story.

What happens? Rabbi Akiva can barely say what has been done to him, but Rabbi Eliezer understands. He begins to weep, rends his garments and sits on the ground like a mourner. He is shattered. Immediately, the Talmud relates:

God’s punishment comes. A third of the olive crop is destroyed, as is a third of the wheat, and a third of the barley. The sages also said, “There was great anger on that day, as any place that Rabbi Eliezer fixed his gaze was burned.” Much later in the story, Rabbi Eliezer’s prayer for vindication causes the death of Rabban Gamliel, the “nasi,” the head of the community.

Now we can see why reading only the first half of the story destroys it. The point of the story is to be found in the comparison between God’s two reactions. Kick God out of the process of determining Jewish law, the Talmud says, and God laughs. Treat a human being the way that the rabbis treated Rabbi Eliezer, and God’s wrath knows almost no limit. Legal views (or political views, or moral views) are one thing, the story seems to suggest, and on those, reasonable minds can differ. But when it comes to “trashing” another human being, that God will not abide.

This brings us back to Rush Limbaugh.

Let me be clear. I do not celebrate the fact that Limbaugh suffered from cancer; that’s a horrible fate for anyone. I do not celebrate his death at a relatively young age; I feel for his family’s loss. But let me be equally clear: the world is a much, much better place now that Rush Limbaugh is off the air.

That view will run afoul of many in the Jewish community, for Limbaugh was a staunch defender of Israel, as our prime minister was quick to point out. But what kind of human being was he? The well-known columnist Caroline Glick, joining our august prime minister in mourning Limbaugh, tweeted, “Rest in peace, Rush Limbaugh. You were already an angel in life.” 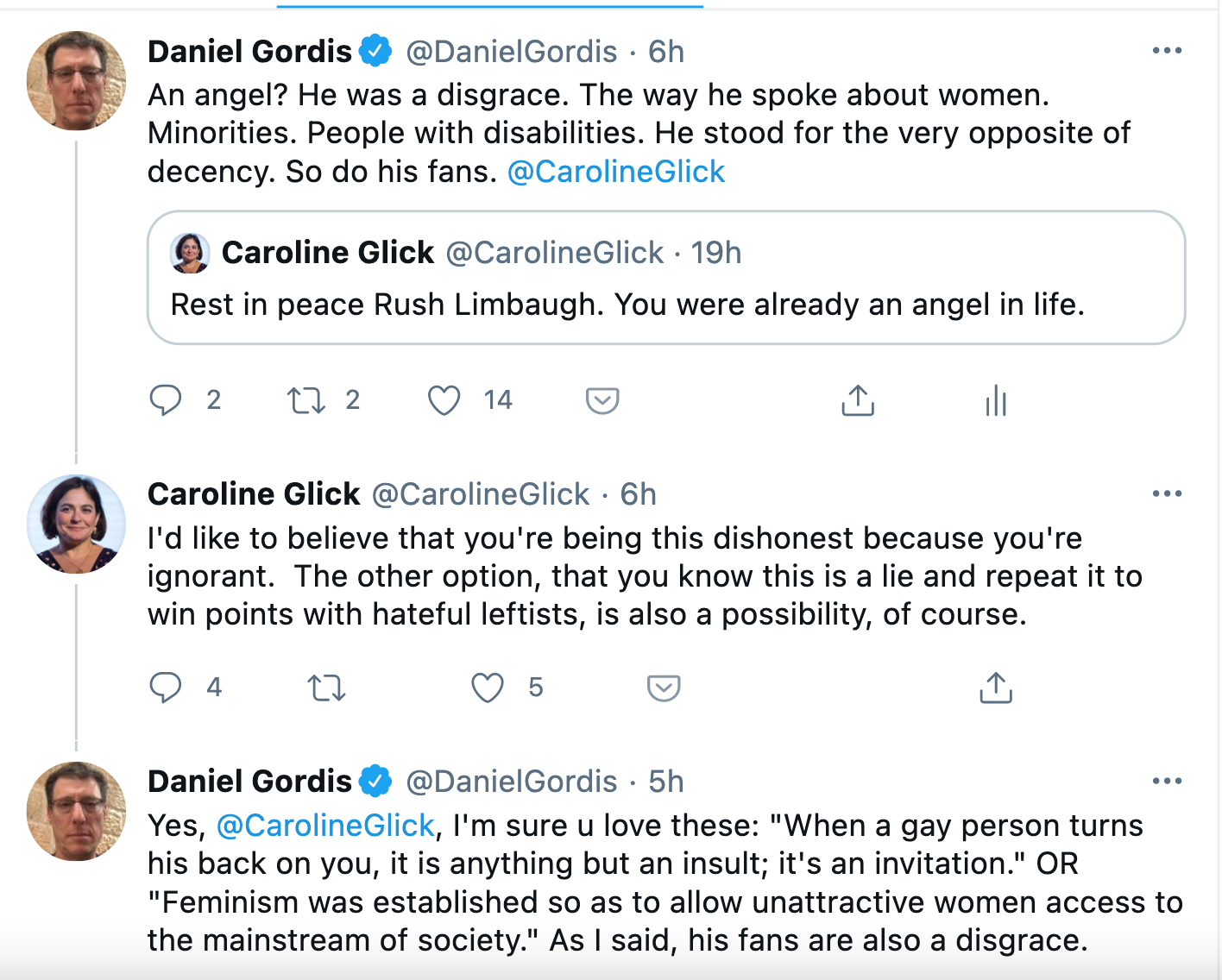 Really? Rush Limbaugh was an angel in life? Here are a few of his choice quotes from over the years.

On race: “Have you ever noticed how all composite pictures of wanted criminals resemble Jesse Jackson?”

On women: “Feminism was established so as to allow unattractive women access to the mainstream of society.”

On gays: “When a gay person turns his back on you, it is anything but an insult; it’s an invitation.”

Ah, you might say, at least he didn’t take on specific people when he demeaned those groups. Ah, but you’d be wrong.

When Barack Obama was a little-known senator gaining popularity, Limbaugh started airing his parody song, “Barack, the Magic Negro.” An angel, that Rush.

Remember Sandra Fluke, the Georgetown law student who testified before Congress about why it was critical that health insurance cover birth control? Here’s what Rush had to say about this very-much-identified woman: “What does it say about the college co-ed Susan Fluke who goes before a congressional committee and essentially says that she must be paid to have sex — what does that make her? It makes her a slut, right? It makes her a prostitute.”

But Rush wasn’t done with Ms. Fluke. He later had this to say: “So, Ms. Fluke and the rest of you feminazis, here’s the deal. If we are going to pay for your contraceptives, and thus pay for you to have sex, we want something for it, and I’ll tell you what it is. We want you to post the videos online so we can all watch.”

Now, where does one begin, in describing how sick that is, on more levels than one can name? Yes, his fans will point us, Rush apologized for that one, for he’d gotten himself into some very hot water. What did he say? “I chose the wrong words in my analogy of the situation. I did not mean a personal attack on Ms. Fluke.”

But Rush did much worse than choose wrong words, day after day in his attacks on her. And he didn’t mean a personal attack? What, then, did he mean? He was sorry, that’s true; but he was sorry there was a backlash, that’s all.

After Caroline Glick tweeted that Limbaugh was “an angel,” I tweeted a response that he was actually a disgrace. And I stand by that. Some of his positions I disagreed with, a few I agreed with. But the way he spoke about people? Rush Limbaugh was a disgrace.

Glick’s response to me? “I’d like to believe that you’re being this dishonest because you’re ignorant. The other option, that you know this is a lie and repeat it to win points with hateful leftists, is also a possibility, of course.”

Ignorant? I’m sure that’s true; I’m ignorant of lots of things. But dishonest? Where was I dishonest, if I genuinely believe he was a disgrace? But then, of course, came Glick’s real issue. Rush was beyond reproach because he was a conservative, and I must have said what I’d said “to win points with hateful leftists.” I’m sure some of those “hateful leftists,” who usually do not like very much of what I write, are chuckling, hearing that I was trying to win points with them. That’s good. These days, we can all use a chuckle.

But there’s really nothing to chuckle about. Have we really become a Jewish world in which, because someone espouses our political or religious viewpoint they are beyond reproach? How many traditional Jewish institutions critiqued the January 6 insurrection at the Capitol, but just happened to omit any mention of the president? A lot; the examples are easy to find online. And how many liberal Jewish leaders and institutions are willing to call out the hateful side of Black Lives Matter, its attitudes to Jews and Israel in particular? Very few, actually. Why?

Why this binary view of the world? Rush loves Israel, so we love everything he said? Trump did some good things for Israel, so we can’t mention what he did to American democracy? Black Lives Matter is about correcting a longstanding horrific wrong, so we can’t call them out on their intolerable anti-Semitism?

Do we really want the Jewish state’s prime minister lauding someone who said such vile things about so many different people? Are we not mortified when a high-profile Jewish writer calls Limbaugh an “angel”?

There aren’t a lot of “achnai ovens” to be found these days, so it doesn’t really matter whether they are declared pure or impure. But the categories of pure and impure still matter. There are ways of speaking that come close to pure, and ways that reek of impurity. Jewish communities worth their salt — whether liberal or conservative, observant or not, Israeli or American — ought to be able to tell the difference and to embrace some nuance.