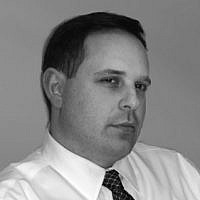 The Blogs
Gary Osen
Apply for a Blog
Please note that the posts on The Blogs are contributed by third parties. The opinions, facts and any media content in them are presented solely by the authors, and neither The Times of Israel nor its partners assume any responsibility for them. Please contact us in case of abuse. In case of abuse,
Report this post.

Added to the usual chorus of criticism directed at Israeli military operations generally, the recently concluded Operation Pillar of Defense has spawned a relatively novel charge: that Israel deliberately targeted journalists covering the conflict in Gaza.

On November 18, for example, Reporters Without Borders condemned Israeli air strikes that it claimed targeted “news organizations in Gaza City,” arguing that “even if the targeted media support Hamas, this does not in any way legitimize the attacks.” Among the targets Reporters Without Borders objected to was a missile strike that allegedly injured three employees of “Al Aqsa TV”, the official Hamas-run television channel. A few days later, Human Rights Watch followed suit issuing an FAQ that asserted that Hamas-operated civilian broadcast facilities could become military targets if “used to send military orders or otherwise concretely to advance Hamas’s armed campaign against Israel” but were “not rendered legitimate military targets simply because they broadcast pro-Hamas or anti-Israel propaganda.”

Then on November 20, the Committee to Protect Journalists criticized the IDF for a missile strike that killed Mahmoud al-Kumi and Hussam Salama, described by Hamas’s Al-Aqsa TV as its cameramen who “were covering events in the Al-Shifaa neighborhood of central Gaza when a missile hit their vehicle at around 6 p.m.” The IDF later identified one of the targets as Muhammed Abu Shamala, a senior leader of Hamas’ military wing, the Izz ad-Din al-Qassam Brigades, and a key architect of Hamas’s weapons smuggling efforts in Gaza, though it still remains unclear whether Mr. Shamala was injured in the strike.

None of the organizations that criticized Israel on this issue have made mention of Al-Aqsa TV’s status as a Specially Designated Global Terrorist by the United States. Even more problematic is the fact that they have also failed to offer any meaningful definition of what would constitute conduct that “concretely” advances “Hamas’s armed campaign against Israel” and would therefore justify an Israeli strike. When the U.S. Treasury Department designated Al Aqsa TV, it described the channel as “a primary Hamas media outlet [that] airs programs and music videos designed to recruit children to become Hamas armed fighters and suicide bombers upon reaching adulthood.” Presumably, this would qualify what Reporters Without Borders has in mind when it speaks of media that “support Hamas.” But as the U.S. government noted, the most crucial fact about Al Aqsa TV is not only that it espouses Hamas’s party line (as indeed many media outlets do): it is a media source directly controlled by senior Hamas officials.

More importantly, Hamas itself regards Al Aqsa TV as well as the “Information Office” of the Izz ad-Din al-Qassam Brigades to be critical tools it uses to wage psychological warfare against its Zionist enemy. Not long before Operation Pillar of Defense began, the Izz ad-Din al-Qassam Brigades celebrated its 20th anniversary by publishing an elaborate E-book on its website, detailing its many self-proclaimed accomplishments in its first twenty years of existence. An entire chapter is dedicated to Hamas’s evolving media sophistication. According to Hamas, “the importance of the media war in the struggle that takes place in Palestine does not go unnoticed by anyone….Our goal is to support the resistance, boost the morale of the resistance fighters who watch these media materials, and wage a psychological war against Zionists.”

Hamas’s approach has hardly been kept secret until now. Five years ago, in an interview with Hamas’s primary web portal, Al Aqsa TV’s founder and current Hamas Interior Minister, Fathi Hamad, described the Al Aqsa network as the “satellite channel of jihad and resistance.” Although the channel is perhaps best known for its controversial children’s program featuring an infamous Mickey Mouse-like character called “Farfour” who avenges his family’s lost land by stabbing a fictional Israeli soldier, Hamas’s programming is not merely perverse or anti-Israel. It is part of Hamas’s evolving doctrine of asymmetrical warfare. As the Izz ad-Din al-Qassam Brigades’ E-book explains: “Today … the camera is used as a weapon, along with the Kalashnikov, the rocket and the missile.”

The Israeli security services recognize this new aspect of the conflict, just as the U.S. long ago recognized the importance of Al Qaeda’s as-Sahab media operation, while hunting for many years now for its media maven, the American jihadist Adam Gadahn. While organizations such as Reporters Without Borders and the Committee to Protect Journalists are badly needed advocates of press freedom and genuinely want to protect the safety of reporters working in dangerous conflict zones, it is essential to the credibility of their worthy efforts that they forcefully distinguish between real journalists and terrorist combatants who– in their own words – use cameras as a weapon.

Journalists have long understood that their reporting from conflict zones often has real-time impact on the conflict itself by informing decision-makers and impacting worldwide public opinion. What advocates for freedom of the press need to understand is that terrorist organizations are no longer content to feed reporters information and images. They no longer seek to shape and manipulate the news cycle; they are themselves content-providers actively working to broadcast and publish their views as part of a holistic approach to asymmetrical warfare.

In short, whether the IDF targeted terrorist leader Muhammed Abu Shamala as it contends, or Hamas operative and Al Aqsa TV cameraman, Hussam Salama as Hamas claims, human rights groups cannot retain credibility by describing strikes on Al Aqsa TV or its personnel as “the targeting of journalists.” In doing so, they unwittingly aid terrorist organizations like Hamas in their concerted effort to transform journalism into warfare by other means.

About the Author
Gary M Osen is the managing partner of Osen LLC, a boutique litigation firm specializing in terror financing, money-laundering and looted art cases. Mr. Osen has what the Washington Times described as “a penchant for tackling larger-than-life cases” and developing new and creative legal theories that challenge some of the world's largest companies and most powerful governments. The New York Times has recognized him as “an internationally consulted legal authority on terror financing.” He has been quoted and featured in most of the leading newspapers and magazines in the United States and around the world, including Time Magazine, The New York Times, The Wall Street Journal, the Times of London, the Economist, Der Spiegel and Haaretz.
Comments