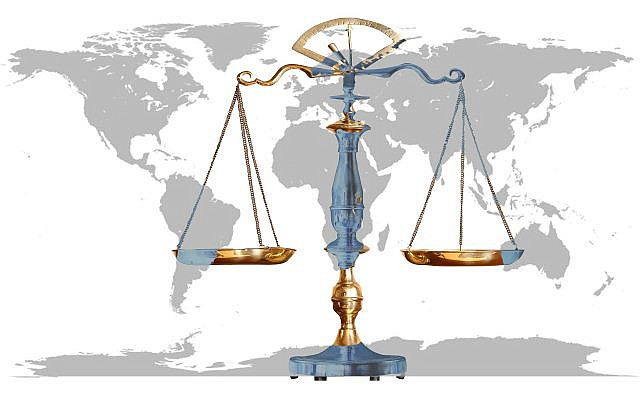 Here’s the amazing thing about the United Nations (UN), it’s not guided by right and wrong, ethics or morality, but rather it’s a virtual institution of majority rules without the institutionalization of underlying principles!

Emmanuel Navon talks about the “The United Nations Saga” in his excellent book on Israeli diplomacy, The Star and The Scepter.

A single Jewish country, like Israel, doesn’t stand a chance at the UN, where they are automatically outvoted and imprisoned by their enemies in a virtual diplomatic isolation.

The UN is composed of 193 member nations, and the most powerful arm is the Security Council, which has 15 members who can impose sanctions and authorize military intervention. The Security Council is ruled by the five powerful permanent members (U.S., U.K., France, Russia, and China) which have veto power over its decisions and so they have a grossly disproportional say relative to other members.

Additionally, the UN is composed of voting blocs, such as the as the Organization of Islamic Cooperation (OIC) that has 57 members or the Arab League that has 22 members. This gives these countries similarly an outsized voice and vote, since they have the ability to not only vote as a group but also pressure other countries to vote with them or incur their collective wrath.

The level of hatred by the UN’s OIC member states was clearly vocalized at the OIC Summit in October 2003 when Indonesia’s Prime Minister, Dr. Mahathir Mohamad declared in an anti-Semitic outburst that “1.3 billion Muslims cannot be defeated by a few million Jews. There must be a way [to destroy them].” Therefore, while Israel’s enemies, thank G-d, haven’t been able to militarily defeat them, they alternatively seek Israel’s destruction by political fiat. Hence as Abba Eban once said:

If the Arab world wanted to pass a General Assembly resolution declaring the world to be flat, the automatic majority would oblige.

Consider the UN General Assembly, where Yasser Arafat spoke in 1974 and he called for dismantling the Jewish State, the only time anyone had so called for the destruction of a UN member state, and he received a standing ovation! The incredible bias and hatred against Israel reached an evil climax on November 10, 1975 with the absurd vote equating Zionism with racism, contemptuous of the Jews 2,000-years of homelessness and persecution. At the same time, the UN, while bastardizing Jewish rights and independence, instead established a committee on “the exercise of the inalienable rights of the Palestinian people.” One of the first decisions of this committee in 1976 was to endorse the PLO charter, denying Israel’s right to exist and calling for a replacement with another exclusive Arab state—on top of the 22 others already in the Arab League.

Moreover, the bias and hate against Israel by the UN is not limited to the General Assembly; the Human Rights Council (HRC), for example, has notoriously issued almost more resolutions condemning Israel than against all other nations of the world combined. In this vein, the UK notified the HRC in 2017 that because of their bias, the UK would vote against any future HRC resolutions against Israel, as the UK representative put it:

Israel is a population of eight million in a world of seven billion. Yet since it’s foundation, the Human Rights Council has adopted 135 country-specific resolutions; 68 of which are against Israel.

Further, not only is Israel outvoted, isolated, and indiscriminately condemned, but they are institutionally treated as a pariah nation, regardless of their actions. Thus, Israel is the only country in the entire world that is permanently on the HRC agenda.  Moreover, any conference held by the HRC must hold a separate discussion just on Israel. In 2018, the United States withdrew from the HRC with US Ambassador to the UN, Nikki Haley, calling out:

[HRC’s] Chronic bias against Israel… [and their] hypocritical and self-serving organization that makes a mockery of human rights.

Similarly, the United Nations Relief and Works Agency (UNRWA) is uniquely dedicated (i.e., biased) to the plight of Palestinian refugees, while all other of the world’s refugees are covered by the United Nations High Commissioner for Refugees (UNHCR).  Even the number of refugees counted is different for Palestinians from any other refugees in the world, where for the Palestinians their descendants are indefinitely counted so that 250,000 refugees and 450,000 internally displaced Palestinians (700,000 total) has ballooned to 5,400,000 now, and the UNHCR goal of solving refugee situations through local integration and resettlement does not apply to UNRWA. Thus, while Israel absorbed 900,000 Jewish refugees from Muslim countries, the Muslim countries have no expectation or obligation to absorb the Palestinian refugees. Rather to the contrary, while other world UN refugees are aided for a few years, the Palestinians aid by UNRWA can be renewed by mandate of the UN so that it is essentially permanent. This, while tens (if not hundreds) of millions of other refugees around the world have been settled locally and resolved in short order.

Amazingly, while the UN spares no time or effort in forever condemning Israel (a country the size of New Jersey), they are conspicuously absent while tyrants and dictators around the world frolic freely leaving murder and destruction in their wake.

Unfortunately, in all these cases and many more, the UN has been grossly derelict in its duties to maintain the peace and security. Moreover, the UN does not follow common sense principles of conscience and humanity to do good over evil.

The ability of the Muslim nations and those they coerce to outvote Israel at the United Nations, whether in the General Assembly, the HRC, and through UNRWA is neither right, ethical, nor moral, but simply a fixture of might makes wrong at the UN! In democracies around the world, we pride ourselves on balancing voting with constitutions that protect the basic human rights of all people, including minorities be they according to race, color, religion, sex, national origin, or disability.  Unfortunately, these principles and protections of people don’t apply at the United Nations. Thus, bias and hatred of Israel is allowed and even encouraged to perpetuate as long as their enemies can use sheer numbers or their power to deny the basic rights of a secure existence and nationhood to the Jewish people. Regretfully, these types of gross injustices, including genocide, have been perpetrated against many other minorities as well. While there have been attempts in the past to reform the UN, unfortunately, these remain mostly unsuccessful, and the farce that is the United Nations continues with its unsound power structure and the lack of a global moral compass to guide its actions.