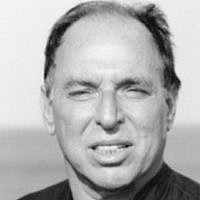 The Blogs
Martin Peretz
Apply for a Blog
Please note that the posts on The Blogs are contributed by third parties. The opinions, facts and any media content in them are presented solely by the authors, and neither The Times of Israel nor its partners assume any responsibility for them. Please contact us in case of abuse. In case of abuse,
Report this post.

Barack Obama’s initial six months in the presidency were rich in symbolics. No one could have misunderstood his intention when he anointed Al-Arabiya, Dubai-based and Saudi-owned, to be the first of the world’s television networks to interview him from the White House. Not surprisingly, the reporter began by asking what Obama meant when he promised “aggressive peacemaking between the Palestinians and the Israelis.” The president responded lamely by alluding to George Mitchell, his already-designated special envoy to the problem, as “somebody of enormous stature. He is one of the few people who have international experience brokering peace deals.” As if the nasty Irish quarrel was at all comparable to the historical and meta-historical warfare between Zion and Araby. Then, two more fawning asides about Mitchell, thought of as the deus ex machina for the president’s predicament, and one allusion to King Abdullah of Saudi Arabia for having “great courage,” a prelude to Obama’s undignified curtsy in Riyadh.

When Obama speaks about Islam it is mostly blah, blah:

“…the same respect and partnership that America had with the Muslim world as recently as 20 or 30 years ago, there’s no reason we can’t restore that.”

Did not Obama realize, did not his advisers tell him, that the very day he was addressing the Islamic orbit was the 30th anniversary of the shah’s abdication? The Ayatollah Khomeini wrote the acrid script for American-Islamic relations from 1979 onwards, exacerbating the ongoing conflict in Lebanon (where 17 American diplomats and then 241 US Marines were murdered in two separate incidents, and 56 French soldiers besides), sharpening the hostility of Syria toward the West, eroding the progressive reforms — yes, the shah’s progressive reforms — in Iran itself. And how about Obama’s careless reference to peace two decades back? The Gulf War, for one, which really was the beginning of the conflict against Saddam Hussein that has not yet ended, and, since it was always a sectarian conflict, will not likely end soon. The Afghani fratricide is an antique phenomenon, reinvigorated by Obama himself as the “yes, we can” war, but now being left to fester, ancient hatreds on ancient turf, and spread to the paradigmatic non-nation-state of Pakistan.

So is Islam a religion of peace, even if you set aside Syria and Yemen, Mali, Nigeria and all the others? Will some Muslim leaders, somewhere, anywhere, call their faithful to the streets to protest and condemn the ritual fratricide of their own?

Actually, no one expected Obama to call attention to the Turkish genocide against the Armenians on his visit to Turkey that April. Unlike the Germans, who are hewn to a philosophical tradition of guilt and remorse and have put themselves and their youth through an unforgiving struggle of conscience, Islam does not traffic in matters of collective guilt and remorse. These are not categories of the faith, and Obama did not nothing to disturb the self-satisfied temper of the faithful. Having anointed Recep Tayyip Erdogan his favorite Muslim, he brought comfort, if not exactly good cheer, to Ankara. The most brazen instance, given the fact that America is not a member of the European Union and that the Europeans do not trust him, was the president’s endorsement of Turkey’s admission to the common market. If anything, Obama’s advice left the continent very much peeved. Where does he come off telling us who is family?

He also had an assignment for Turkey in resolving the historic struggle between Israel and the neighborhood within which it lives. “Like the United States,” Obama declared in a sloppy, all-too-facile analogy, “Turkey has been a friend and partner in Israel’s quest for security.” Now, the fact is that the editor of this very page was perhaps the first American journalist to chronicle the Erdoganian view of the world and his weird affinities for weirder allies. Already in 2006, he had noticed the prime minister’s weakness for the body parts blood libel implicating both Israel and our country. Apparently, neither the president nor his scriptwriters were aware of the cranky Ottomanist elements in Erdogan’s Middle East strategy. Anyway, Ankara has never let go of the Mavi Marmara pretension that you can break a legal international blockade against a rogue not-at-all statelet without cost or intervention. What was Netanyahu to do? Let the Turkish “humanitarians” run the blockade and invite anyone and everyone to follow suit?

The fact is that Obama is afflicted with a certain Turkomania, and it persuaded him that the US could trust Erdogan’s lead in Syria, way past the time he had shown that he was not inclined to do so. Erdogan suffers from Kurdophobia, which stays his hand in Syria, however much his early but sudden antagonism to the Assad regime in the civil war may have suggested otherwise. Indeed, as soon as Turkey let pass the shooting down of its bomber by Damascus, it no longer had credibility as a big player in the conflict. But Obama had trusted Erdogan to lead, and, predictably, he did not. 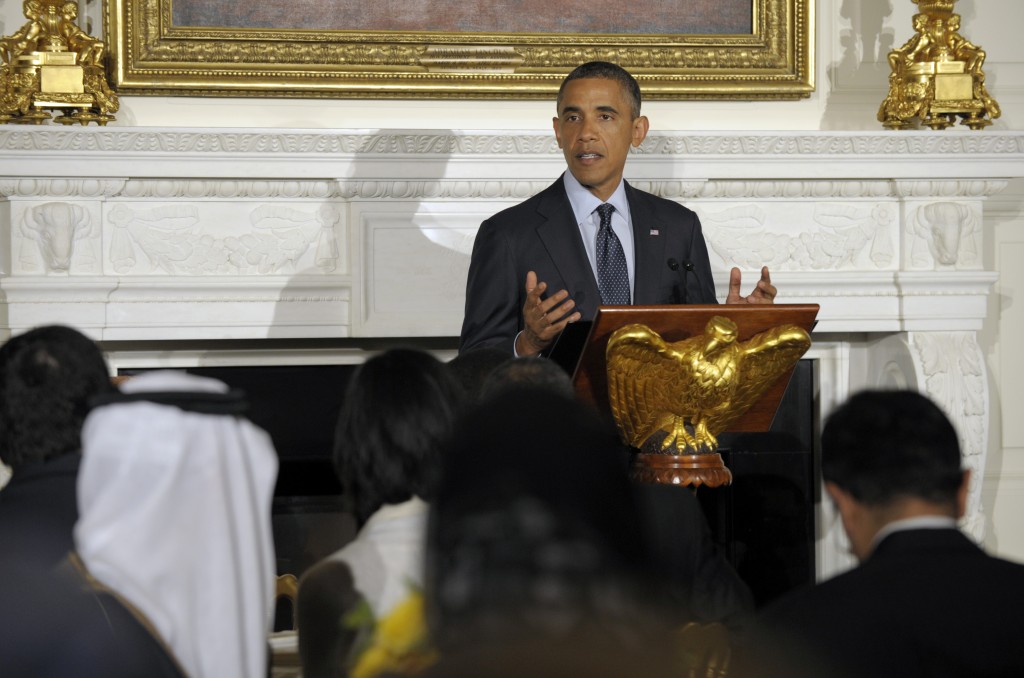 US President Barack Obama celebrates the Islamic holy month of Ramadan by hosting an iftar dinner in the State Dining Room of the White House in Washington, Friday, August 10, 2012 (photo credit: AP/Susan Walsh)

The White House and Foggy Bottom had many flimsy excuses for not moving forcefully against Assad. What they amounted to was that, if America really intervened, it would intensify the carnage on both sides. And shift the leadership to the extremists. But that is exactly what has occurred with the rebels because there was trivial assistance, and the rough guys take over when desperation sets in. Yet Assad’s fascist rule has not fundamentally changed. Indeed, his leadership was indulged for some time by the president and his underlings. Of course, the Syrian people would have continued to suffer. The key to the goodies was that Israel would pay the price by forfeiting the Golan Heights. Not since the ’30s had the American elite been so blasé about its dealings with ideological trash that had much blood on its hands. And it wasn’t only Anna Wintour who would make the dictator voguish. Harvard, the school where I taught for more than four decades, held a meeting of its Arab Alumni Association in Damascus last year, with Professor Jorge Dominguez, vice provost for international affairs, as a speaker. Blood was already flowing in the streets of Syrian cities and towns. And who was the other star to address the crowd? The wife of the tyrant. I suppose that this can be seen as a defense of free speech.

The third of the president’s Middle East extravaganzas at the beginning of his tenure was the speech in Cairo. One doubts that Obama would be embarrassed by his text. After all, he does not make mistakes! But maybe, if we had a secretary of state like Dean Acheson or George Shultz instead of Hillary Clinton, he could be made to be mortified by its strange medley of geeky innocence and high moral cynicism. (Have you noticed on the State Department website feature, “Travels With The Secretary?” 102 countries, 352 travel days, 843,450 miles. This is not a formula for analytic depth.) Our chief executive clearly has no patience for depth, which may be why he and the mistress of our diplomatic corps get along so well. Even a cursory rereading of his June 2009 text would expose how deeply he does not understand the region and its doctrines, its peoples and their excuses. Virtually nothing — no fact, no insight — has survived from the president’s self-confident Al Aqsa prayer meeting only 38 months ago.

Of course, what Obama considered the most serious unsolved foreign challenge to the United States was the question of Palestine, or, to be more precise, the question of the Arabs of Palestine, now referred to as the Palestinians. The world has given them — through the United Nations with its various redundant organs (what do they all do?), the support of the sloppy moralists (like Norway, Sweden, unworthy South Africa) and the up-for-purchase so-called non-aligned — the phony backing that they see as near unanimous support. The fact is, the Palestinians are further away from having their Palestine than at anytime since 1967. Or maybe 1947. The General Assembly may in its next session sanction an Arab government called Palestine, as it did 65 years ago, when the British ran away from their Mandate while the Jews picked up half of it and turned an established society into a nation-state. What kept Arab Palestine from becoming Palestine at that time were Egypt and Jordan, and the fact that Palestinian society was a primitive and fractured collection of clans and tribes as far from nationhood as other countries which the British abandoned in the post-war period.

In any case, who really cares what the General Assembly does or, for that matter, what the Security Council does or does not do? Kofi Annan is the prototype for the UN: cocksure but irrelevant, really altogether beside the point. Nothing the UN does will affect the lives of the Palestinians. What keeps Palestine from becoming Palestine now is that most — indeed almost all — of the Palestinians do not recognize the Jewish state and its history. Which is really why they won’t negotiate. Which is also why they return again and again to the empty geographical formula of the armistice lines of 1949.

Those lines are a fiction, even if they are called “1967 lines,” which is the Arab attempt to show they are up-to-date. History may wait for a while. But it does not stop. The State of Israel, which (mostly) desires to be freed from the burden of Palestine and the Palestinians, will not accept a “peace” that leaves it open — because of its size and its turf, because of its vulnerability as a free society to terror, because of their obsessions with false and falsified history, because of their indifference to such civilized rules of war as are still possible — to the unappeasable resentments of time.

It is a pity that Obama took his foreign policy imperative from Rashid Khalidi in fixing on the issue of Palestine as uniquely his own. The issue that is most important is Iran and nuclear weapons, and this has also fundamentally affected the Palestine question. If Iran secures the bomb, so will Saudi Arabia, Turkey, even Egypt. For three and a half years Obama deceived himself into thinking that somehow he had, he could, he would, with suasion and goodwill, talk the Persians into giving up the ultimate weapon. Then he did “sanctions,” ever so slowly and piecemeal. Did the president not grasp the urgency of time? The further Iran went in securing the atom for itself, the more difficult it would be for it to give it up. That is where we are now: Iran on the cusp of possession, the Arabs in agitated nowhere, the Palestinians fooling themselves that statehood is only a step or two away. And Israel? A free and pleasant place to visit and to live, with many grounds, both old and new, to worry.