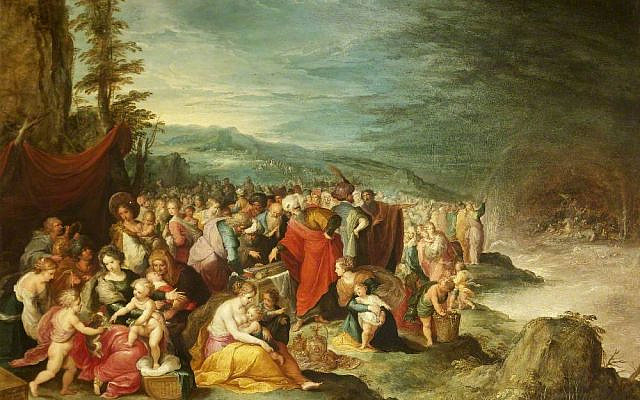 'The Israelites Gathering around Joseph's Sarcophagus after the Crossing of the Red Sea,' by Frans Francken II (1581–1642). (Public domain, National Trust, Tyntesfield)

Three verses into Parashat Beshalach, in the climactic moment when the exodus from Egypt finally — finally! — takes place, we learn that “Moses took with him the bones of Joseph, who had exacted an oath from the children of Israel, saying, ‘God will be sure to take notice of you: then you shall carry up my bones from here with you'” (Exodus 13:19).

Why make this action the grand finale of Moses’ work in Egypt? Why mention it in this particular, and highly dramatic, point?

One possible answer is that Moses’ action ties the exodus to the family drama that led to the Egyptian exile, as well as to the loss of memory that started the Egyptian oppression, when a new Pharaoh rose “who did not know Joseph” (Exodus 1:7). By keeping faith with Joseph, and by keeping his body within the nation’s fold, Moses closes the historic chapter that started when Joseph’s brothers sold him down to Egypt. By recalling Joseph’s request, he restores him to memory. By correcting the travesties that led the Israelites into their era of exile oppression, Moses allows them to leave this time behind.

But the biblical narrative does more than closing open circles: it brings Moses and Joseph into physical and textual proximity, inviting us to examine them together, side by side. What do we see, when we watch Moses carrying Joseph’s bones? What comes to mind when we compare these two men?

Both held positions of power in the Egyptian court.

Both saved their people.

The full implications of this disparity play out before us as we watch the people marching out of Egypt. Joseph could use “the master’s tools” to give his people subsistence. But since his authority and means stemmed from Pharaoh’s favor, he could not lead his family beyond the latter’s sphere of power. When he wanted to bury his father in the land of Canaan, he couldn’t simply do it. He had to curry Pharaoh’s favor and permission first. And even when the king graciously granted his approval, Joseph and his brothers left “their children, their flocks, and their herds” (Genesis 50:8) behind. We don’t hear explicitly that they did so by Pharaoh’s orders, but, as Yoram Hazony points out in The Philosophy of Hebrew Scripture, Pharaoh must have wanted to make sure that his valued adviser would find it absolutely necessary to return.

It was Moses who, refusing to play the game by Pharaoh’s terms, could reject a similar suggestion. Since he did not need to curry Pharaoh’s favor, he could assert that “not a hoof shall remain behind” (Exodus 10:26). Working from outside the system, he was able to resist its pressures, and bring it tumbling down.

At first glance, we might assume that the biblical narrative draws our attention to the differences between Joseph and Moses to highlight and celebrate the latter’s success. What better way to heighten this moment of triumph, than to remind us how it eluded even the brightest and most righteous of past leaders, like Joseph?

But if we read the opening verses of Beshalach more carefully, we can see that their tone is not at all victorious. If anything, they portray the exodus as flawed and fragile, and question its ultimate success.

The very first word in the parasha, “va-yehi” (“it was,” or more colloquially “now when”), echoes the Hebrew word “nehi,” “lamentation.” And according to Rabbi Tzadok from Lublin, this mournful tone makes sense in light of the rest of the verse. “Now when Pharaoh let the people go,” (Exodus 13:17) the parasha tells us, reminding us that the Israelites may be marching out of Egypt, but they’re doing so by the grace of the Egyptian king. Pharaoh may have granted his permission all but willingly, but he is still the one who calls the shots.

The Israelites, in short, did not win their exodus through their own efforts and initiative. In light of that, were they truly free?

Against the backdrop of this question, Joseph’s bones serve as a grim reminder: they remind us that external liberties don’t make a person truly free. Joseph had tremendous means at his disposal. He fashioned policies, restructured governance in Egypt, and owned great riches. But “the first among slaves may be powerful, but a slave he remains,” as Hazony puts it. And underneath all his trappings of power, Joseph was still beholden to Pharaoh. When it came to his father’s burial, Joseph was afraid to assert his will, and instead asked Pharaoh’s household to plead his case before the king. It was this fear that marked Joseph as a slave. “The physical works of mortar and brick,” Hazony writes, “is really nothing more than the concrete expression of an inner enslavement.” Tyrants and slave holders can’t subdue all their subjects with whips and barbed wire. They must rely on people’s fear to make them subdue themselves instead.

In the beginning of Beshalach, the Israelites have lost their shackles and left the works of brick and mortar well behind. But did they, or did they not, overcome the fear that was the heart of their enslavement? Marching out as they did, with the king’s urging and permission, were they truly free from their internal subjugation to Pharaoh?

God himself doesn’t seem too sure of that. In the very first verse of the parasha, we hear that He led the people in a circuitous path, lest they “have a change of heart when they see war, and return to Egypt” (Exodus 13:17). The Israelites did not feel the kind of conviction that allows one to weather trials. As pawns in the great showdown between God, Moses, and Pharaoh, they lacked the resolution that comes from choosing one’s own path. They were still liable to turn tail and return to their erstwhile place under Pharaoh’s thumb.

How could such people rise to the challenges ahead of them? How were they to find the resolution to fight and build and create an independent nation in the Promised Land?

But Joseph’s bones, and with them — the memory of his experience, do not merely seal the story of the physical migration from the land of Egypt. They also hint to us at what should — what must — come next. By reminding us that fear is the foundation of internal slavery, they also tell us that the path to liberation lies in mastering one’s fear. Joseph remained a slave, despite his power, because he did not dare to assert himself when he thought Pharaoh would not approve of his desires. By the same token, if the Israelites were to face their fears and act despite them, they could break Pharaoh’s hold on their hearts and minds.

And so, we know what must happen for the exodus to achieve a true liberation of the Israelites: somehow, they have to face their fear and choose to overcome it. By helping us to understand this necessity, Joseph’s bones and memory prepare us to better understand — to better appreciate — the events that are to come.

They prepare us for the moment when Pharaoh and his army will give chase, trapping the Israelites between slavery and the ocean. We will watch that moment, and understand why one more confrontation is necessary to the story: the Israelites must be given an opportunity to grapple with their fear and overcome it. Marching out with Pharaoh’s permission isn’t enough.

They prepare us for the moment when God rebuffs Moses’ cry for yet another God-driven salvation. We watch Him call “Why do you cry out to Me? Tell the Israelites to go forward” (Exodus 14:15), and understand His harshness. By placing the responsibility of action on the Israelites’ shoulders, God gives them the opportunity to choose freedom over surrender, a choice that required them to embrace the possibility of death.

And they prepare us for the moment when the Israelites plunge into the waves. We see them do so, and understand that they are finally truly, fully, free. When slaves stop worrying first and foremost about physical survival, tyrants and slaveholders lose their power over them. When the Israelites choose to “live free or die” in the waves, they finally leave their slavery behind. They may enter this moment as people who are not quite fully liberated. But once they choose to pursue the future they can glimpse beyond the waves, they become the authors of their liberation. They birth themselves as free men and women, who are willing and able to forge a path ahead.

I like to imagine that Joseph dreamed of this moment when he spoke of the day when “God will be sure to take notice of you.” And I like to imagine that as the Israelites watched their oppressors drowning in the ocean, they spared a thought for the young dreamer whose genius saved them from starvation in an earlier generation, thus making this later, greater, moment of salvation possible.

Whether they did or not, the people who emerged from this moment of trial and salvation bequeathed us an eternal truth: both enslavement and liberty begin within us. We cross the line from the first to the latter when we choose to act despite our fear.

In this regard, all of us are always standing on our own internal shorelines, choosing between inaction and the liberty ahead. Do we allow our fears to overcome us, to keep us paralyzed and passive? Or do we feel our fears, acknowledge them, yet plunge ahead?