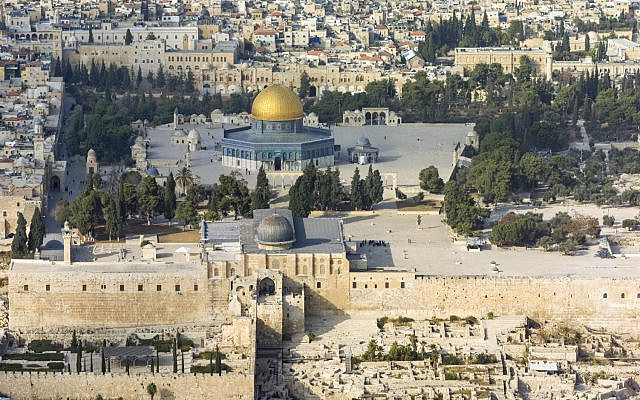 The Israel-Arab conflict is full of contradictions and astounding facts, but to an outside observer like me, nothing is quite as contradictory and bizarre as the situation on the Temple Mount, the Jews’ holiest site (known to Muslims as the Haram al-Sharif and their third holiest site).

And it gets more bizarre yet. This highly discriminatory rule was agreed to by Israel, the Jewish state, and it is enforced by the Israeli Police. This agreement occurred between Israel and Jordan after the war of June 1967 during which Israel conquered East Jerusalem, including the Temple Mount.

This strange situation has evolved slightly in the past year. In July 2021, the Times of Israel reported that Israel was “quietly letting Jews pray on Temple Mount, in break with status quo”, but this change is still very tentative. At around the same time, Israeli Prime Minister Naftali Bennett spoke out in favor of freedom of worship for Jews on the Temple Mount, but later his office backpedaled by stating that “the status quo holds”. In October 2021, a judge ruled that Jewish prayer was allowed on the Temple Mount if it is “non-noticeable”, but after an appeal by the Israeli government, an appellate judge quickly reversed that ruling, and Israel’s Public Security Minister Omer Barlev insisted that the status quo was being maintained.

On April 18, 2022, Jordanian Prime Minister Bisher Khasawneh issued a statement saluting rioters who are “hurling their stones in a volley of clay at the Zionist sympathizers defiling the Al-Aqsa Mosque”. How did the “Zionist sympathizers” do that, you might ask. Well, according to the Times of Israel, “Palestinian rioters throw rocks at Israeli buses en route to the Western Wall, as well as in the Temple Mount compound, in an attempt to prevent non-Muslims from touring the site”. In other words, mere Jewish presence on the holiest Jewish site constitutes “defiling” in the eyes of even Israel’s Arab peace partners, and violent opposition to that presence is seen as virtue.

At the same time, the Ra’am party, the only Arab party to ever be part of an Israeli government coalition, froze its support for the government and threatened to withdraw it altogether unless its demands are met, including restoring “the status quo on the Temple Mount under which Jews are allowed to visit, but not pray”. Ra’am party leader Mansour Abbas is not otherwise anti-Israel, and he has even declared in December 2021 that “Israel will always be a Jewish state”.

Some Arabs try to rationalize their opposition to Jewish prayer on the Temple Mount by citing the fact that some Rabbis believe that according to Jewish law, Jews should not enter the Temple Mount at all. A disagreement among Jews on Jewish law, however, is not for non-Jews to rule on, and it certainly does not justify violence against Jews.

From a moral point of view, the solution to this issue is simple. Anyone from any religion should be able to pray anywhere they want if they respect the rights of others to do the same. This is an internationally recognized fundamental human right. Article 18 of the Universal Declaration of Human Rights which was adopted by the UN General Assembly on December 10, 1948 states that, “Everyone has the right to freedom of thought, conscience and religion; this right includes freedom to change his religion or belief, and freedom, either alone or in community with others and in public or private, to manifest his religion or belief in teaching, practice, worship and observance”. Even an atheist like me who doesn’t much care for praying anywhere can understand this right. Human rights aren’t about allowing others to do what we think makes sense; it’s about allowing everyone to do what makes sense for them.

From a realpolitik point of view, however, the solution is much less clear. The exercise of this fundamental human right by a small number of Jews angers Arabs, including pro-Israel Israeli Arabs and including Arab states who have signed peace agreements with Israel. To maintain internal peace and peace with its neighbors, Israel is forced to compromise even on the fundamental freedom of religion of its Jewish citizens.

In response to Jordan’s support for the rioters, Bennett denounced “those who are encouraging rock-throwing and the use of violence against the citizens of the State of Israel”, but he did not specifically name Jordan.

On this fundamental issue of basic human rights for Jews, the Jewish state finds itself at the mercy of Arabs. This is ironic considering that Israel was meant to be the one place on earth where Jews are guaranteed equal rights with everyone else. At the same time, the stubborn and sometimes violent Arab opposition to basic Jewish human rights is a reminder of why Israel exists. If Jewish rights are limited in the Middle East even within the Jewish state, one can easily imagine how much more limited they would be if Israel did not exist.