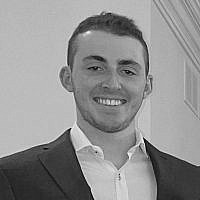 The Blogs
Dylan Gudofsky
Apply for a Blog
Please note that the posts on The Blogs are contributed by third parties. The opinions, facts and any media content in them are presented solely by the authors, and neither The Times of Israel nor its partners assume any responsibility for them. Please contact us in case of abuse. In case of abuse,
Report this post.

With the ceasefire in effect between Israel and Hamas ending this chapter of the Israeli-Palestinian Conflict in the Middle East, the conflict for Jews is only getting worse abroad. The feeling of public immunity empowering a bigoted group of people to commit such brazen, open, and overt antisemitism shocks me, even though I’m not overly surprised. This wave of violent antisemitism is too much to ignore. The people in power who are staying silent or inadequately calling it out should be ashamed.

Most Jews in the diaspora should not be shocked that there is this anti-semitic sentiment, According to the FBI, Jews are the most targeted religious group of hate crimes. Most Jews are not surprised when we see the spike in anti-semitism whenever there is any controversy involving Israel. What is different from years past is how blatant and open these attacks have become and the cowardice to not call it out.

Future generations may read history books that look back at this week’s events in places like  Los Angeles and New York. It will read like a book on the Pogroms that spread throughout the Russian Empire in the early 20th century.

This form of antisemitism is very different from what we saw in 2017 in Charlottesville when white supremacists were chanting, “Jews will not replace us.” This antisemitism is very different from what we saw at the Tree of Life Synagogue shooting in Pittsburgh in 2018. Those examples were very easy for people to call and stand up against. It involved perpetrators that 99 percent of people detest and want to see eradicated; you were not putting yourself in a vulnerable position politically if you made a statement calling out their evil. This time around is different. What if a large swath of those in power support the cause that the people committing these anti-semitic acts use to justify their actions? What if they knew their actions and words added kerosine to the fire to promote hate? And as quiet as a mouse to condemn it? What if it did not fit their political narrative to fight back against these attacks, so they would rather ignore the problem?

Antisemites have been encouraged by progressives in power who say the quiet part out loud, try to mask their true intentions through dog whistles, and the moderates who don’t have the spine to speak up.

There have been overt examples, like Ilhan Omar’s 2012 tweet that read, “Israel has hypnotized the world, may Allah awaken the people and help them see the evil doings of Israel.” In 2019 Omar accused AIPAC of bribing people to be pro-Israel on behalf of the Israelis, insinuating that Jews had dual-loyalty and controlled people with money.

Rashida Tlaib has found herself in hot water for accusations of antisemitism that stems from her hatred of Israel. She has done things like sticky note the world Palestine over the map of Israel, worn shirts that express her desires for an Arab one-state solution, and  voiced solidarity with the statement “from the river to the sea” since taking office.

Furthermore, both have been linked to organizations known to sympathize with terrorism and terrorist in the name of destroying Israel. It is one reason they were denied entry into Israel when they planned on traveling to the West Bank and Gaza.

These incidents were from a couple of years ago, but if you think Omar and Tlaib have changed in a meaningful way, you are mistaken. Since this conflict began, they have gone back to the same tropes, the same dog-whistles, and the same dishonest rhetoric against Israel that has contributed to creating an inhospitable environment for Jews. It has invigorated those who hate Jews to disguise their actions as anti-Israel or anti-Zionist. I doubt they want violence against others and against Jews. But they without question have some culpability in the events that have transpired, and their silence on the recent wave of anti-semitism is all we need to hear.

Neither of them has really condemned the root cause of the antisemitism in an official statement or on Twitter. The best we got is from Omar quote tweeting that “this has to stop” about the Los Angeles incident. No mention of what has to stop, who did it, why it might have happened, or who’s rhetoric might have helped spur the incident. None. They both know if they admit they might have had some role to play, there would be political consequences to pay. So they must deny every accusation or hide behind their enablers who lack the spine to call them out.

During the controversy over Omar’s antisemitic tweets in 2019, one might have thought the Democratic leadership would hand down harsh punishment after repeated offenses. The Democrats thought otherwise. Omar faced no stripping of her committee roles, no censures, no suspensions, no fines, and no other forms of repercussions. The only outcome was a statement stating that they were against all types of hate. It never named Omar as the cause of the letter and referred to antisemitism in passing. Without any context, you could not even identify the resolution being about antisemitism.

The events that unfolded with Omar in 2019 directly impact the cowardice we have seen from the Democratic side of the aisle thus far in the wake of the most recent anti-semitic attacks. Their failure to point out who should bear some of the responsibility for the anti-semitism is all political. They do not care to call out the hate if it hurts their cause. When they need to take a stand against those in their party and against their voters despite the political hit they’ll take, the safety of Jews is not important enough to them. Democratic house leaders Nancy Pelosi and Steny Hoyer have been on mute. Chuck Schumer is MIA, and Bernie Sanders is more concerned with blocking deals to Israel.

What has been even more frustrating is when they do make a statement. The cookie-cutter statements are reminiscent of the 2019 anti-hate resolution. Each statement cannot call out anti-semitism on its own, it must be clumped in with other forms of hate. Last summer, it was considered blasphemy to respond to the statement “Black Lives Matter” with “All Lives Matter”. You were seen as inconsiderate towards the Black community suffering injustice by diverting the attention needed to fix their issues. It was obvious to everyone that every life matters, but that the focus needed to be on Black lives. So what changed from last summer until now? It seems obvious that combating all types of hate matters, but why is it so difficult for them to just point out anti-semitism as the one to focus on?

For the past four and half years, we kept hearing from the Democratic party that rhetoric matters. But when Democratic leaders know they must bear the blame, they go silent or try to make broad statements along the lines of “All Hate Matters”. It is a dereliction of duty to the highest degree. They refuse to face the music. Their silence is not only deafening but rupturing our eardrums.

The anti-semitism is eventually going to die down. In the end, these weak leaders who care about appeasing the voter base and towing the party line will walk away scot-free. There will be no ridicule, no one will have to answer for their actions, and democrats and progressives will memory-hole what has transpired, as if nothing happened.

But we must remember. We must hold the politicians accountable and make them answer for their complicity and their incitement of antisemitism. It is up to people to say we are done bearing the brunt of the abuse, the violence, and the actions and words of those in power who are indifferent or do not care about Jews. We must stand firm and be resilient, we must be loud and articulate, and we must stick together as one family.

About the Author
Dylan Gudofsky attends the University of Western, and is from Toronto. He currently serves as VP of the Israel committee for Western Hillel. Dylan enjoys history, politics and sports.
Related Topics
Related Posts
Comments