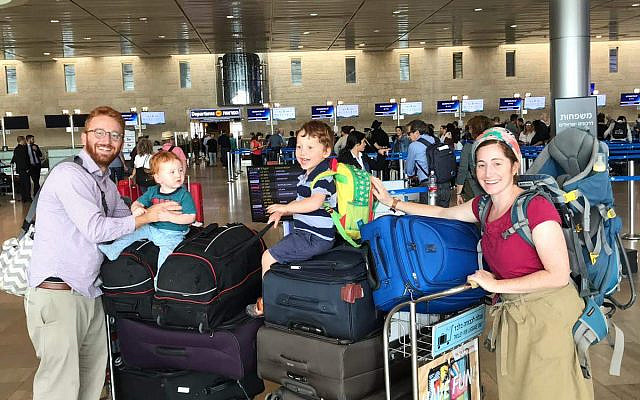 The past two weeks have been some of the most challenging that my wife and I have faced in our marriage. As the coronavirus changed the lives of everyone around the world, we watched from Senegal, which for a very long time remained untouched by the virus. As synagogues cancelled services in America, and Israel closed its borders, we felt privileged to continue our life largely as usual here in Dakar. Then, on March 15, with only 24 cases in the entire country, Senegal took the drastic measure of closing all schools and ending international travel in and out of the country. We had a few days to decide whether to stay or go.  Without a clear idea of where we could go, we decided to stay put, at least for the time being.

Since then, things have become more intense.

Last Sunday, with only 56 confirmed cases in the country, the president declared a state of emergency, barring travel between cities and forbidding people from leaving their homes at night. Mosques along with all public events were also closed. That is when we got nervous. Many of our friends who work for the U.S. Embassy and the U.N. made the decision to completely stop leaving their homes. We, too, bought enough food to last for over a month, and bought enough toys, books, and goodies to keep our children occupied in case we would get stuck at home. We also started hearing rumors of a complete lockdown for over a month, along with speculations that massive unemployment  and widespread hunger f could lead to civil unrest.

All of this was happening while there were fewer than 100 cases in the entire country. Meanwhile, our friends and family in Israel were barely able to leave their homes at all, the National Guard had been deployed in New Rochelle to enforce a curfew, and New York City became the worldwide epicenter of the virus.

Should we stay or should we go?

We were told that secret flights were still happening out of the international airport, and one morning I was given a call by a Jewish businessman who worked here saying that I had a half hour to decide if we want to leave. We were not ready to make the decision on the fly and decided not to board that plane.

Throughout all of this we were also taking responsibility for Pesach preparations for the Jewish community in Senegal. In our time here we have helped build a wonderful small Jewish community, and there are several Jews who are looking for matzah. At first, we had someone with Amazon Prime in Senegal place an order for us, but the shipment never arrived.  Then we tried to get matzah from the Israeli embassy, but it was not clear if that would arrive either. Ultimately, my second cousins in South Africa found a courier who took responsibility for shipping 10 packages of matzah for the Jews of Dakar. We were the center of an international effort to bring matzah to Senegal—a sentence I never thought I would write! We came to appreciate how incredibly interconnected the Jewish world is, even as we became increasingly isolated and cut off from the rest of the world.

Late last week we had a few sobering phone calls with people we trust both here in Senegal and abroad. We decided that, despite the fact that for the time being everything is stable here, and currently Senegal feels safer and better off than both American and Israel, the possibility that the situation might spiral out of control was reason enough for us to try to leave.

Yesterday the U.S. Embassy released information about an emergency repatriation flight for U.S. citizens living in Senegal. We immediately signed up, though to date we do not have confirmation that we will get on the flight. If we cannot get on that flight, then we are stuck here for the foreseeable future. This has all been extremely challenging, and we have tried very hard to not let our children (ages four and one and half) feel more stressed about the situation. Not having a school routine for the past two weeks has been hard enough for them!

With all this happening I have been thinking a lot about the upcoming Passover holiday and Jews leaving Egypt. Is this what it felt like when the Jews left Egypt? We eat matzah on Passover because the Jews had to rush out of Egypt so quickly that they did not even have time to let the bread rise. At the seder we remind ourselves that we eat matzah because the people of Israel had “been driven out of Egypt and could not delay, and they also did not have time to prepare other provisions.” Will we even have matzah this year, I have found myself wondering? Assuming we get on this emergency U.S. embassy flight, will we be able to take our suitcases? Or, will we be like the Jewish people in Egypt who did not have time to pack their belongings?

The rabbis of the Talmud said that only a  small minority of the Jewish people left Egypt on Pesach; the majority chose to stay behind. I now understand those people that stayed behind more than ever before. It is so hard and scary to leave, especially when you do not know where you are going. This is especially true for us, where we are leaving a comfortable place that does not have a serious outbreak of the coronavirus to head to the New York region, which is the center of the worldwide outbreak. It seems in many ways easier and smarter to stay here than to go. I also have a better appreciation for the Sefardi tradition to begin the seder with the words of the Rambam that bivihilu yatzu mimitzrayim “In panic the Jews left Egypt.” We have been experiencing the panic of exodus for the past two weeks.

Nevertheless, we have decided that at a time like this we should be closer to family and community in either America or Israel—countries that we call home—than to risk being here if the situation seriously deteriorates. This is of course a particularly hard and painful decision for my wife who is here for her PhD field research. She has been working for most of her adult life towards the opportunity to do anthropological field research in West Africa, and is indefinitely putting her research and professional career on hold.

We do not know where we will spend Passover this year,  though it seems clear that whether we are in Africa, Israel or America we will be by ourselves in quarantine—without guests, friends and family for the first time in our lives.

We are not even sure which continent we will be on; however, we hope to make it to the New York area. While, like the people of Israel when they left Egypt, we are leaving in panic, and do not know where we will end up, we are comforted by the knowledge that just as international Jewish community has taken interest in our lives here in Senegal and has even organized to bring matzah to Dakar, so too will our community support us through these challenging times.

More importantly, we also realize that we are only a tiny part of a much larger story. Every day we are amazed to read about people around the world going out of their way to help total strangers throughout this crisis. While the coronavirus has made all of humanity fearful of so many things, it has also demonstrated how we are all interconnected and reliant on each other. While we confront the worst, it has brought out the best of so many people. We hope and pray that despite the challenges that the world faces today, that this collective experience will make the world a better, safer and more welcoming place for all people.

About the Author
Ariel Fisher is an American rabbi who recently moved to Jerusalem after living in Dakar, Senegal for a year and working as a campus rabbi at Princeton University for four years before that. He uses this platform to reflect on his unique life experiences and connect them with Judaism and the Torah. He is always happy to hear feedback from his readers!
Comments