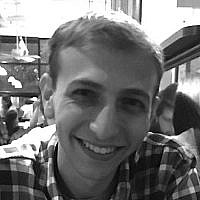 The Blogs
Moshe Klein
Apply for a Blog
Please note that the posts on The Blogs are contributed by third parties. The opinions, facts and any media content in them are presented solely by the authors, and neither The Times of Israel nor its partners assume any responsibility for them. Please contact us in case of abuse. In case of abuse,
Report this post.

On Sunday, liberal Zionist Peter Beinart, a popular columnist, was detained at Ben Gurion seemingly because of his perspective on current Israeli policies. One month ago, on July 2nd, American-Jew Ariel Gold was deported from Israel after the government identified her as a BDS activists. These actions created an uproar on the left as a Jews were either denied entry or experienced difficulty entering the Jewish state. On the other side, Israeli officials claimed that they have no obligation to allow people who desire to harm the country to enter into the respective country. Both of these incidents present an ironic identity crisis for the Jewish state. How does Israel, a home for Jews around the world, prevent those same Jews from coming home?

From a pure policy perspective, what the Israeli officials did makes sense. Why should a country accept foreign citizens who have publicly expressed their desire to undermine the stability of the country and interfere in their domestic politics? Such an acceptance would go against common sense and could end up hurting the country in the long run. Furthermore, on principle, Israel should deny entrance to those who seek to boycott it because why should boycotters benefit from violating the policies they support.

However, Israel is in a unique situation in that it has responsibilities beyond its own citizens. Israel is the Jewish homeland and a state for all Jews. This has manifested itself in several different policy decisions from right of return to the rescue of Yemenite and Ethiopian Jews. Not only that, but Israel and pro-Israel organizations have branded the Jewish state as a home and protector for Jews around the world. Given this reality, Israel is confronted with a conflict of pragmatism and principlecreating an identity crisis.

Israel has an obligation to represent the interests of both Israelis and Jews. As citizens of the country, Israelis and their interests must be articulated into policy. On the other hand, if Israel is a home to all Jews, then they do have an obligation to permit entry to all members of the tribe regardless of religious or political affiliation. This includes Jews that are engaged in the BDS movement as these people are still Jews.

Some on the right might label these people abhorrent terms like “self-hating Jews” and claim that Jews who don’t believe in the state of Israel should not be accepted despite their Jewish identity. A similar claim is occasionally made by Israelis of liberal American Jews who criticize Israel from their comfortable living rooms while their Jewish brethren sacrifice their lives to uphold the state.

However, qualifying Jews like this is unfair and lacks nuance. While there are a minority of Jews who do not believe in the legitimacy of the Jewish state, many liberal Americans and BDS activists do support the state but have serious concerns about the policy decisions made by the state — hence their activism.

This experience has inspired Ariel Gold to consider moving to Israel showcasing how even BDS criticism stems from a love for the country. At the same time, Peter Beinart, while critical of some state actions, has clearly done so out of love for Israel. These are not people who deny or are ashamed of their identity, but rather people who seek to improve the reality for both Palestinians and Israelis.

These people are not the exception and many Jews do not criticize Israel because they dislike the state. On the contrary, they criticize Israel because they are passionate about improving it and making it a better place. If American-Jews really disliked the state, it would be much easier to become anti-Zionist and simply disown it entirely. American Jews like Ariel Gold and Peter Beinart must make conscious decisions everyday to live in a nebulous space between supporting the state as it is and taking actions that can encourage Israel to move in a better direction. Other people might have different ideas of where that direction leads, but the Jewish state cannot discriminate between Jews with differing political opinions.

In the eyes of the state, there can be no “good Jews” and “bad Jews” but only “Jews.” Such is the obligation of the Jewish state, and while it is difficult it is also necessary to fulfill its duty as the Jewish homeland. This is the reality for the Jewish state and as long as Israel maintains that title, it needs to be the homeland to all Jews. That is the solution to Israel’s identity crisis.