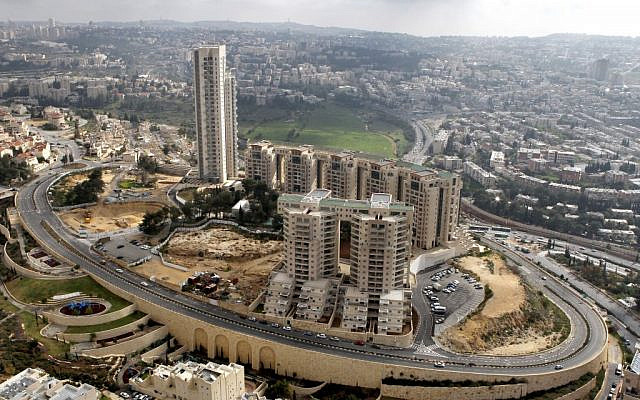 A bird's eye view of the Holyland complex, one of the first of Jerusalem's high-rise projects. (Nati Shochat/Flash 90)

Architectural design is, of course, an accurate reflection of the society it is part of, never separate from it.

As a nation Israeli architecture, urban design and planning’s early beginnings were excellent. Sir Patrick Geddes’ plan for Tel Aviv (1930-1950), Richard Kaufmann’s neighborhoods, Rehavia and Beit Hakerem in Jerusalem, Ahuza and Central Carmel in Haifa, to mention but a few, turned to gold. Eric Mendelsohn, Dov Karmi, Zeev Rechter and Arieh Sharon, along with many others were active here, architects, urban designers and planners of the highest stature.

But over the last generation something has gone terribly wrong.

Political involvement in design has proved disastrous. Senior Likud MK David Bitan is just the last in a long line, seemingly endless, of former heads of municipal Planning and Building Committees (Rishon Lezion) to be indicted for bribery. Little wonder large swaths of Rishon are as ugly as sin. Serving the pols are bureaucrats loyal mainly to themselves and the system they are part of, who have forgotten that they are public servants, some in their positions for decades. As for the Israel Lands Authority, it has served mainly the private sector. Ministers and mayors, grossly ignorant in matters of architecture and urban design, decide. Jerusalem Mayor Moshe Lion has every reason to be concerned about public reaction to the fact that his massive building plans lacking a planning policy. Many Jerusalemites no longer recognize their  city.

Sadly, the moral and ethical climate in Israel today is at its lowest point ever. The delicate balance between the public good and the private individual has long ago been shattered in favor of private, short-term greed. Little or no thought whatever is accorded future generations.

Affluence — big money — has led to ever larger building projects, a professional challenge of the highest order, with ever larger failures that will be us for generations, unrelated to human scale and their environmental context. Real estate and branding have little to do with architecture.

Today’s pace of change is the fastest in history. The thousands of towers we see being built nation-wide, many of them identical, are the result of computer-aided design which enables duplication of even the most complex plans at the touch of a key. And if you haven’t got the latest CAD program, chances are you’ll find yourself out of work. One of the outcomes of the digital revolution is that the field of architecture has become dominated by large offices — corporations, leaving smaller, local offices, far more sensitive to the spirit and character of their cities and towns, in difficulty.

Throughout the last 30 years, architects as an organized group have remained silent, cooperating with entrepreneurs and builders to the full, As if the free-standing tower were the only building type known to man, the entire history of art and architecture ignored, demonstrating an incredible and thoughtless conformity.

The major challenge facing the younger generation of architects: ethical and moral. Let’s hope they meet it well.