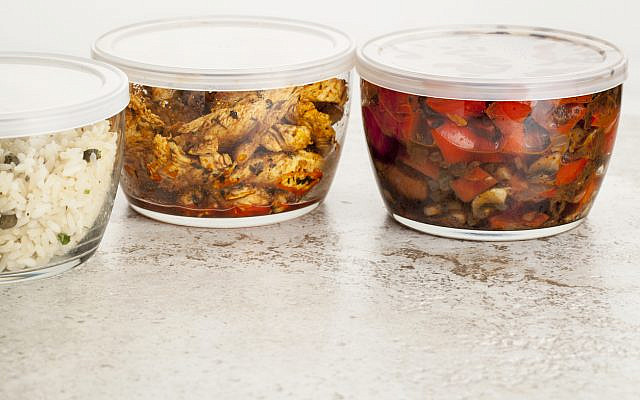 My wife and I have a running argument that is close to four decades old. Our disagreement is not about politics, religion, parenting, or finances. Our argument is about a matter of deep, potentially life-altering importance: Tupperware, the iconic American line of food storage utensils. When I put food away in the refrigerator, I always choose what I think is the right sized Tupperware container and set about filling it. Almost without fail, she’ll tell me that the container is too small for the amount of food that I have, and this annoys me no end. I’m a smart person who’s raised three kids, built a family and a home, successfully run a synagogue, and even published a book. I think I’m competent enough to figure out which size Tupperware is necessary to pack up whatever quantity of food I have in front of me.

“No it won’t,” she retorts with a gentle shake of her head that says, “I love you, but you are clueless.”

The scene that follows is pretty much always the same. I proceed to fill the container quickly and elegantly, only to look with dismay at the amount of food I’ve packed, the amount left unpacked, and the damning truth that there is no space left in the Tupperware container. I fight valiantly, desperately, to fit everything in, nearly resorting to sitting on the container top to force it to close and lock.

The reverse scene has become predictable as well in our home, after nearly four decades of marriage. My wife begins to fill a container with leftovers, I look at the size of the container and confidently tell her, “The food won’t fit in there.”

“Yes, it will, “she confidently responds, scooping the food neatly into the container, as I snicker to myself, “She’s so wrong! I can tell it won’t fit!”

And surprise!, it always fits.

I’d like to attribute our varying degrees of success at Tupperware-to-food ratio measurement to sheer luck. Likely, this isn’t a matter of luck but of left -brain, right-brain dominance. Her mathematical left-brain strengths allow her to assess size proportions and measurements in ways that express themselves weakly in my dominant right brain. In my defense, perhaps my inaccurate measurements of proportions – trying to fit large amounts into small spaces – isn’t about a lack of mathematical skill but about an abundance, perhaps an overabundance, of imagination. Imagination is one of the prominent traits of right-brain people and it is a major feature of how my mind works. I like to think about the world as it might be, or could be, or should be, rather than how it is, bounded by laws of physics and mathematical rules. So, what if 50 ounces of pasta couldn’t possibly fit into a 10-ounce Tupperware in reality? Standing in my kitchen, I get carried away imagining such a thing happening. What if we could violate the laws of physics and make the largest things fit comfortably into the smallest things? What if we took a miraculous leap beyond the constrictions and conventions of size and proportion to reshape the universe?

In their close, creative readings of the Bible, our talmudic era sages fantasized about just such a miracle. They had this crazy idea that they referred to in Hebrew as me-aht ha-machazik et-ha-merubeh: that the tiny could hold the tremendous. (For one midrashic source, see Leviticus Rabbah 5:7) Examples abound. When God created the world it was nothing but water, but God took all that water and squeezed it between parcels of dry land; in the famous story of Moses hitting the rock instead of speaking to it, he called all one million Israelites together, and they all fit around the tiny space of that stone; in the time of the Messiah, all nations of the world will gather around the relatively tiny space of the holy city, Jerusalem, as one human race.

This idea that God would suspend God’s own physical laws to hold the oceans, the Jews, all of humanity in a tight and intimate embrace surely can’t be taken literally, nor do I think that the rabbis of long ago intended it literally. As great storytellers, they used this fantastic imagery of the tiny holding the tremendous to set people’s imaginations on fire, as they taught about life’s greatest miracle: the capacity for the seemingly tiniest, daily experiences and actions to contain tremendous beauty, meaning and transformative power.

Me-aht ha-machazik et-ha-merubeh: the tiny holds the tremendous. Through this idea, our ancient teachers wanted us, in the words of the poet William Blake, “to see the world in a grain of sand,” to rejoice every morning over God’s endless love and creativity in the smallest of things and actions, and in seeing them, to express and live them ourselves. Our teachers had another goal as well. Living under the oppressive, often ruthless authority of the Roman and late-Persian empires, they knew how hard it is to go through one’s day and feel blessed for the tremendous miracles in one’s tiny life, a life of little or no significance to those with all the power. They told their wild miracle stories about the tiny holding the tremendous not so much to teach that God can break the laws of physics, as to point the way to something much deeper: God invites us as individuals and as communities to grow and break out of the constricting, disempowering tininess of our lives as they might feel to us, so that alone and as communities, we can do tremendous things, if only we would try to envision and act on them.

Me-aht ha-machazik et-ha-merubeh: the tiny holds the tremendous. For our ancient sages, this idea was filled with hope and light. But, as we know, there can a very dark side to the idea of the tiny holding the tremendous as well. Here are some examples:

Close, humble explorations of the tiniest aspects of Nature can expand tremendously our respectful embrace of the wondrous varieties of life on our planet, so that we deepen our resolve to protect it. Yet relegating Nature to the tiniest portion of our consciousness and concern in the name of economic progress and personal comfort has resulted in Nature’s tremendous backlash in the form of climate change that might destroy our planet.

Our teacher, Maimonides, was painfully aware of both interpretations of the tiny holding the tremendous. In his classic book on repentance, he evoked yet another wild yet wise metaphor, that of being balanced on a weight scale, to explain the tremendous potential of each of our tiny lives, when he wrote:

Carefully note Maimonides’ language in describing every person’s moral journey throughout the year. A person should see himself and the world as equally balanced, and every act for good or evil as having global impact. Maimonides is well aware that, in the actual world of physics and politics, it is, or at least it seems, highly unlikely that one tiny action of one tiny individual will make a tremendous difference for the good. Yet, like his rabbinic ancestors, Maimonides is challenging us to fire our imaginations with this miraculous possibility, to take the leap of faith that we, the seemingly tiny, can hold and effect tremendous transformation for good, even and especially through our tiniest actions.

It is difficult for us in democracies under siege, on a planet growing hotter, in cultures drowning in hate speech and lies and violence, to see ourselves as Maimonides asks us to do; to truly have faith that we tiny beings have tremendous potential to make a difference, to make the world better. Yet isn’t that stubborn faith precisely the subversive, cosmos- shattering essence of Judaism? Isn’t that faith that the tiny can hold the tremendous possibility of good precisely what has held us together and inspired civilization for over three thousand years?

About the Author
Dan Ornstein is rabbi at Congregation Ohav Shalom and a writer living in Albany, NY. He is the author of Cain v. Abel: A Jewish Courtroom Drama (The Jewish Publication Society, 2020. https://jps.org/books/cain-vs-abel/) Check out his website at danornstein.com
Related Topics
Related Posts