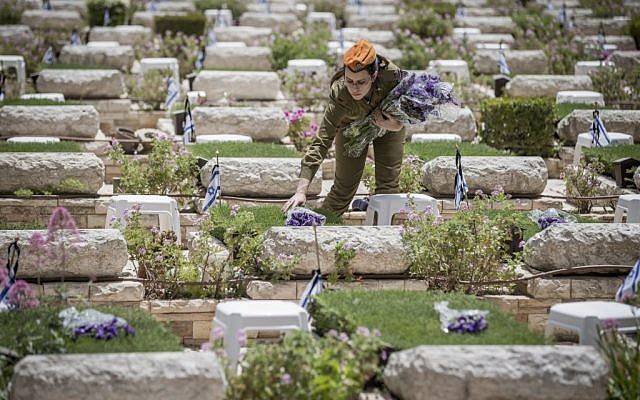 There is something about the atmosphere in Israel in the week between Yom HaShoah and Yom Hazikaron which I cannot quite put my finger on. It’s as if we are reluctant to release the solemnity, when only a week later we will go through it again. It is a week of limbo between two of the most meaningful days of the year in our Jewish national consciousness. I actually think it is fitting. It makes the causal thread which connects Israel’s establishment with a reminder of the need for us to have a nation state, that much more tangible. But, it is more than that. I like to think that it is as if subconsciously we acknowledge that the sacrifice of our reluctant heroes is far too profound to be expressed in a mere twenty four hours. So, we build up to the culmination of Yom Hazikaron with homage to the legacy they have bequeathed us, and we restrain ourselves until we can burst into the celebration of our independence like the fireworks in the sky on the eve of Yom Haatzmaut. Indeed, as I watch the fireworks, I often wonder how they ascend to their zenith shining brightly and then the light is suddenly extinguished, and how this exemplifies so perfectly the lives of our fallen, whose shining lights were suddenly extinguished, without the dignity of being able to fade.

To date, from the first Aliya in 1860, 23,645 soldiers and members of the predecessors of the IDF have died. An additional 3,134 civilians have been killed in acts of terror. With about 6.3 million Jews living in Israel today, that comes to not even one half of one percent of the Jewish population. However, it seems that every single Israeli has been touched by the death of a soldier, or a terror victim. It could be a relative, a friend, a fellow soldier, a soldier from your unit, someone you saw on a bus — it doesn’t really matter. The point is that what makes Yom Hazikaron so poignant that it affects every single Israeli deeply, is that everyone has a personal connection to someone killed. Within four months of making Aliya, I already knew three soldiers who lost their lives. During the minute silence, their faces pass before my closed eyes. Visualizing their faces enriches that minute silence, sinking deep into my lungs, as my breath becomes heavy with the weight of their memory. I always feel a sense of disappointment when the minute ends. Too soon, I think. Too soon. But there are five faces I remember in particular. They died close to me. So close in fact, I could have been one of them.

Reserve duty never comes at a good time and the call-up in July 1990, was no different. I belonged to a good infantry unit, made up mostly of motivated people from Golani, paratroopers and Nahal. After our last stint of duty which was in a hell-hole called Halhul, and where I had been shot at by an overexcited settler, I was called into an interview with Felix, our platoon commander and the Company commander, and told that they had decided to promote me to platoon sergeant. This was to be my first “miluim” as platoon sergeant. I arrived at the Tze’elim training base and as I got off the bus the heat hit me like a wall. By the time I reached the tent to sign in, I was soaked in sweat. This was a two week stint, the first week just with the command staff to prepare for the Regimental war games that were planned, and the next week, for the war games themselves. I greeted my fellow NOC’s and officers, with high fives, and smiles, and the occasional joke. It was good to see them. It is a strange thing, camaraderie; you build an unbreakable bond with people doing things none of you enjoy doing, but nevertheless you would not want to do it with anyone else. To the point that you actually look forward to seeing them, as much as you dread going to miluim.

There was Rami, always neat, with his shirt tucked in, and big Joe, the American kibbutznik with his bushy beard and his characteristic floppy hat. There were others, too, like Guetta, who chain smoked and Yaron, who always brought a ghetto blaster. At the briefing, we were told about the exercise, which was sort of experimental. They were trying a different, synchronized system for infantry assault in open field warfare, coordinated with artillery. We were introduced to Eitan, the officer in charge of liaison with artillery – another kibbutznik. The week was spent learning the details and acting out our positions, while the nights were spent drinking coffee around a gas stove and listening to Yaron’s ghetto blaster. The atmosphere was close and comfortable. There is a standing order in the army that wherever you go you have to take your weapon with you. Once, Joe got up to go somewhere, and as he picked up his rifle, I called out/sang “Hey Joe! Where you going to with that gun in your hand?” We all laughed.

I will never forget that moment.

On Monday, we met the troops who were briefed and kitted for the exercise. It started the next day. Halfway in, we were supposed to “conquer” enemy positions placed on a series of hilltops, with one platoon leapfrogging over the other, after the next hilltop had been “softened” by artillery. We conquered the first hill, and the partner platoon conquered theirs. It was our turn again. I remember fighting for breath after the last assault and my knees hurting from the effort, and as I breathlessly started to organize our men for defensive positions, I heard a low hum, followed by a dull but loud “WHUMP” and the ground beneath me shuddered, as a wind, like that from the wings of a giant bird stroked my cheek. The safety inspector next to me said “That’s too loud” – and then I heard screams and panicked calls of “Cease Fire, Cease Fire!” People started rushing to the adjacent hill and my platoon commander shouted to me to collect our soldiers and sit in one place. The artillery shell had targeted a hilltop already taken by our partner platoon, instead of the next. It passed right over me and fell barely a hundred meters from where I stood. Five people were killed — among them, Rami and Joe. The next day, I attended four funerals, travelling from Tel Aviv, to Gesher HaZiv. I could not bring myself to attend the fifth. I was drained, all cried out.

It has been 28 years and this is the first time I have told anyone my story. After so many years, the memory of their faces have faded somewhat, but when I close my eyes I remember Rami’s smile and Joe’s bushy beard. I imagine I can hear Marius’s nasal Spanish accent and Shpiegler’s incessant complaints. The only thing I remember about Biton, was his non-existent beard and his smooth, dark skin. I cherish these memories, revisiting them once a year. This is my homage to them and a reminder to me how fragile our lives are, how it hangs on a delicate thread that can be severed, suddenly by the wind of the wings of the Angel of Death.

Of the 23,645 fallen soldiers we remember, only 8985 died in wars and operations. That is a stunning statistic. I am left contemplating the incalculable waste of it all. At least the reluctant sacrifice of those killed in battle, served a purpose we can appreciate. What can be said of those killed in training accidents and other accidents? There is no halo of heroism to shine a light on their deaths, just an incomprehension of the cost, payment of a price for naught. This year, let us determine to remember them as well.