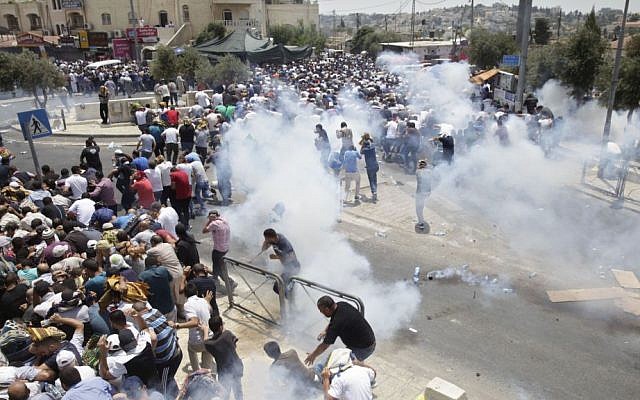 Yes, I agree that there is a need to protect our soldiers, police, civilians — everyone visiting the Temple Mount / Al Aqsa. And yes it seems illogical to my secular-Jewish-western eyes to be objecting to these metal detectors, placed on the Temple Mount/ Al Aqsa in order to protect lives (as they are in probably 90 percent of the public places in the world).

But take a step back and look around.

These Palestinians who are objecting to it, are objecting for a reason. Not one that I can really understand, but if it weren’t so profoundly important to them, they would not be protesting this. It is a principle that western eyes may not understand. It is the objection of people who consider themselves as living under occupation, and whose autonomy on this holy site is being violated, and the truth is (as I have been following the different sides presented on the news these past two days):

1) The metal detectors are useful if you need to scan ten or even hundreds, but when it comes to the thousands who throng there, they are absolutely useless.

2) Moshe Dayan granted Wakf authority on the Temple Mount in 1967. It has held since then. This is seen by the Palestinians, as a serious violation of the status quo.

The security measures of adding metal detectors — a totally reasonable move — could have been done, had they been done properly. As in the case of the pullout from the Gaza Strip, had it not been done unilaterally; had we not pulled out, thrown back the keys and said “You work it out on your own”; had it been done in conjunction with the moderate Palestinian elements, we could have been in a very different situation today.

We are making the same mistake again! We know how to collaborate discreetly and efficiently with the Palestinians. Why didn’t we do it in a way that would not take the lives of three Palestinians and then, in Halamish, three Israelis?! The Palestinians are not going to go away. Neither are we. We need to work together, overtly and covertly.

I don’t know where you all live, but I live on the border with the Gaza Strip. My community was a war zone three summers ago, and my house a landing pad for shrapnel for one of those mortars which also killed two of my friends here, and ripped off the legs of a third. I do not want another war, and we are dangerously teetering on the brink of just that, unless our authorities do something to calm the flames. Because anyone who cannot hear the winds of war howling again must be deaf.