As usual, Martin Luther King Day makes me reflect upon the state of Jewish-Black relations. A little over two years ago, Rabbi Lau, then the recently elected Chief Ashkenazi Rabbi of Israel, caused a minor stir by referring to a group of professional basketball players, and by extension, Black people in general, as “Kushim”. Purposefully or not, I was dismayed that someone who was supposed to exemplify Judaism’s ideals could stray so far from its core message of personal respect.

When I wrote at that time about the pain that names like kushi caused members of the Black Jewish community (and would have caused members of the greater Black community, if they were to understand Hebrew), I was astonished by the number of people who supported Rabbi Lau, claiming that the word was not a term of disrespect. In answer to that, I would ask how many times the term has been used to praise someone Black in a conversation versus when someone Black is being criticized. I haven’t heard it used in a positive way, ever.

What was a little more complicated was answering the people who agreed that the word was inappropriate, and yet lacked another Hebrew term for a Jew whose ancestors came from Africa, something akin to the usage of Mizrahi for Jews from Arab countries. I thought this was a good question, and I didn’t have a comprehensive answer, outside of saying “mi Africa” (from Africa).

I figured that the best people to answer this question would be the people officially tasked with safeguarding the Hebrew language, namely The Academy of the Hebrew Language. After writing to the Academy with my question, I eventually received a reply from Dr. Tobie Strauss Sherebrin, in which she made several pertinent observations. First, she noted that no word is inherently “positive” or “negative”. Each word acquires connotations through a combination of factors, including cultural norms, and the attitude of the speakers towards the subject matter. This process can be seen in the transition of the term Kushi from a biblical term for someone coming from what scholars believe to have been either southern Egypt, or a region directly south of Egypt, into an insult.

Second, Dr. Strauss Sherebrin mentioned that during the 1960s, Hebrew speakers, influenced by America’s Black Power movement, chose the term “shachor”, Hebrew for Black, as the politically-correct term for a person with African ancestry. While some people who came of age before the 1970s may not have changed to the new term, Kushi eventually became not just old-fashioned, but actually offensive. While at the time of our correspondence in the summer of 2014 The Hebrew Academy had not given an official term, her suggestions were either shachor or “mi-motsa Afrikani” (of African origin).

I was excited to receive the letter with this clarification, and was hoping to share this information. However, within a few days of its receipt, we were faced with the kidnapping and murder of the three yeshiva students, along with the rocket attacks which eventually culminated in a war. In that context, mere words no longer seemed as important.

But as we celebrate yet another Martin Luther King Day in the wake of Israel’s ongoing discrimination and antagonism towards Ethiopians and African refugees, I felt it was time for an important reminder: just because we are darker, does not mean we are any less deserving of respect. So, I invite you to start using one of the terms that signal that you value our worth. And when you call me that, smile! 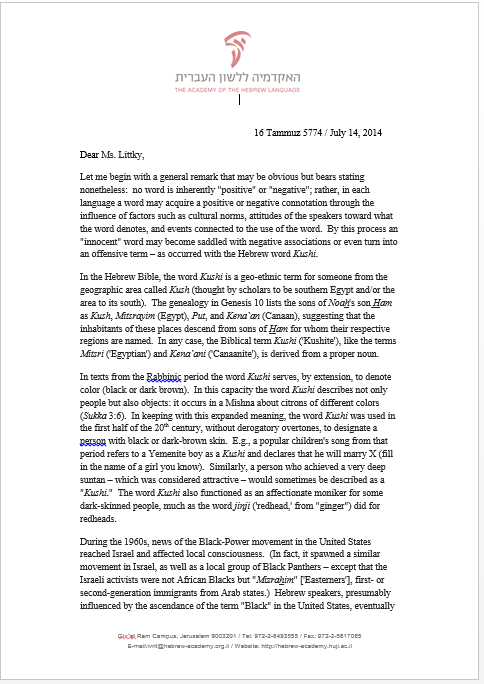 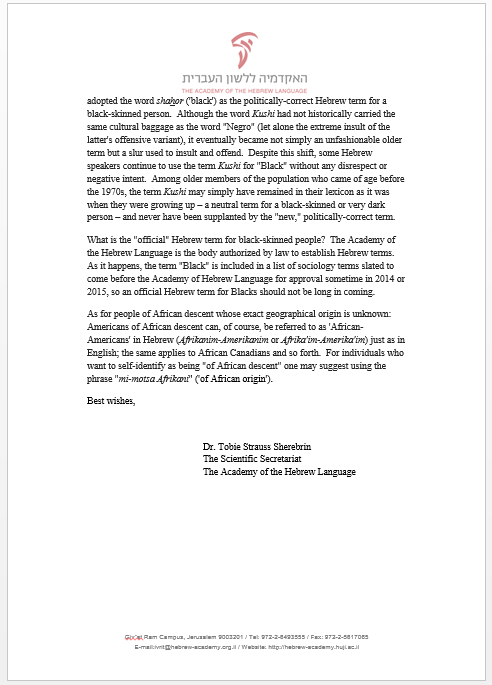