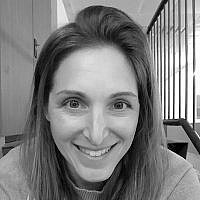 The Blogs
Elissa Sagoskin
Apply for a Blog
Advertisement
Please note that the posts on The Blogs are contributed by third parties. The opinions, facts and any media content in them are presented solely by the authors, and neither The Times of Israel nor its partners assume any responsibility for them. Please contact us in case of abuse. In case of abuse,
Report this post.

My son likes to race me. On any given day, we will be walking down the sidewalk and Amichai will undoubtedly shout – a race to the car! On the count of 10, he tells me. OK, I say – but this time you better count to 10 for real. Ya ya Mommy, line up. We get in our starting positions. He counts… 1, 2, 10! And he is off, laughing hysterically that he got me again with his sneaky start. Amichai runs as all kids do. Freely, enthusiastically, very much believing that at any moment he will be running at the exact speed needed to propel him off the ground into flight. He runs with determination and tenacity.  He runs with joy. It is this joy that I hope people see as he zooms past them. I know though that they might see something else. They might see a little boy running a little differently. His right arm does not glide with the same fluid motion as the left arm. His right leg drags ever so slightly. The brace. They must surely see the brace on his right leg. The thing is — that’s OK because Amichai has Cerebral Palsy (CP) after all. In fact, I want people to see this too.

I want people to see CP.

March is Cerebral Palsy Awareness month. I imagine most people do not know this — I certainly did not. In fact, before Amichai was born eight years ago, I don’t even think I knew anyone with CP. I vaguely knew that people with CP sometimes needed braces on their legs to help them walk. I knew some people also used crutches and others were confined to wheelchairs. I knew people with CP had difficulty controlling their muscles. I imagined that people with CP faced more physical difficulties and hardships than the average person. I imagined they had limitations. And if I am being honest, the thought of CP — or maybe disabilities in general — scared me. I am an athlete. My entire life has revolved around relying on my body to work and perform in an exact manner. The idea of not being able to physically move or use parts of your body was frightening.  But this fear was based on such a narrow, misguided understanding and perception of disability. And then came Amichai.

I had a healthy pregnancy. Amichai was born pretty much on time. The labor was long, yet nothing abnormal. For reasons that will most likely remain unknown, Amichai suffered a stroke at birth. It is an extremely rare occurrence for full term pregnancies. Five days and millions of tests later, Amichai was diagnosed with CP. The athlete who was scared of disabilities, who never had a meaningful interaction with anyone physically handicapped was suddenly catapulted into an unknown world. I remember staring at the doctors in front of me.  A thousand questions running through my head, but really only one. What is CP? They rattled off a string of definitions and facts.

CP is a blanket term that describes a neurological disorder caused by an injury to the brain or other malformations that occur as the brain is still developing. While the brain injury is non-progressive, the injury is nonetheless permanent. It affects body movement, muscle tone, balance and posture. CP is the most common motor disability disorder and the second-most common disability found in children. The types of CP are vast and varied. No two people have it in the exact same way. Amichai was defined as hemiplegic — a type of CP that affects one side of the body. The stroke damaged the left side of his brain, thereby affecting the right side of his body. At the time of his birth, doctors could not predict what this would look like. They explained he could potentially experience anything from a weakness in his right hand or leg (or both) to complete paralysis. Today, we know that Amichai has high muscle tone along his right side which means the muscles are stiffer and do not always move with fluidity. He has a harder time using his right hand. He walks with a slight limp.

Those are the facts.

But when Amichai was still in the hospital,  as the doctors were defining CP — defining Amichai — my father challenged me to gain a deeper perspective. One that extended beyond a set of medical facts. Listen to the doctors he told me. Heed their words, understand them, but don’t forget to look at the reality on the ground. The reality on the ground can sometimes provide more accurate facts than expert advice. He told me this as we were sitting outside the Neonatal Intensive Care Unit. Amichai was hooked up to monitors and there were so many unknowns. In those first days, I was trying desperately to find my footing as the world around me was spinning so incredibly fast. It was this piece of advice that grounded me. I remember walking back over to Amichai’s incubator, decidedly ready to see reality.  I saw him staring at a series of black, white, and red cards placed by a nurse around the edges of his crib. As he experienced seeing these images for the first time, it was like literally watching his brain light up. There he was. Eyes wide open, alert, present. That’s him. I saw him fighting and I learned that he was resilient. I saw the drive and determination. Resilience, drive, determination – those are intangibles in life. Those qualities will take you wherever you want to go – and in that moment, I learned that he had them.

Those were my facts on the ground, that was my reality. On that day and every day since, I have relied on those facts more than anything else. We defined CP through that prism.  Any fears I had about disabilities -what it might do or not allow you to do – they slowly dissipated. Disability faded and all I saw was ability. I listened and continue to listen to his doctors, his fabulously talented physical and occupational therapists, but – I allow Amichai’s own strengths to lead the way. I watch him do everything and anything. He runs, he jumps, he swims, he rides his scooter, he takes karate – he does all of it because he knows he can. Make no mistake – there are challenges, there are frustrations, and there are breaking points. CP demands persistent effort and consistent work. But Amichai has unwavering determination. He has learned how to adapt and think outside the box. He does it differently but he does it with confidence. It is a confidence in knowing that it is never about doing something the right way, the normal way – whatever that may even mean – but rather it is simply about doing it in your way, to the best of your ability.

This is the CP I want people to see as we race past them.

About the Author
Originally from Philadelphia, Elissa Sagoskin now lives in Jerusalem, Israel. An accomplished athlete, Elissa works as personal fittness trainer and coach, but her hardest and most satisfying work is that of a mom to her son - Amichai. As Amichai meets the daily challenges of CP, Elissa has redefined for herself what constitutes as a disability and strives to change common misconceptions in her community. Elissa writes about her journey with Amichai at www.changeperceptions.net
Related Topics
Related Posts
Comments