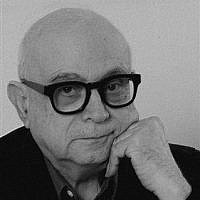 The Blogs
Yehezkel Dror
Apply for a Blog
Advertisement
Please note that the posts on The Blogs are contributed by third parties. The opinions, facts and any media content in them are presented solely by the authors, and neither The Times of Israel nor its partners assume any responsibility for them. Please contact us in case of abuse. In case of abuse,
Report this post.

Nothing would be more reckless than taking the Jewish people’s long-term, meaningful existence, based on pluralistic Judaism, for granted. Looking ahead two to three generations, humanity is sure to undergo a metamorphosis. Values, societies, demography, politics and the very fabric of daily life will change radically, with some “human enhancement” adding to a largely inconceivable future.

Therefore, reliance on the amazing survival capacity of the Jewish people for the last 3,500 years does not automatically assure its future in terms of historic processes. Nor should religious Jews presume to understand the promise of God, it being sinful hubris for human beings to believe that they can comprehend the creator’s actions in history.

With this in mind, the Jewish People Policy Institute (JPPI) presented its 2012-2013 Annual Assessment of the current situation and dynamics of the Jewish people to the Israeli cabinet on June 23. The report included systematic indicators on issues ranging from geopolitics to Jewish identity and identification.

Within this century, main threats to the Jewish people include the destruction of Israel by a nuclear attack, resulting in a crisis of vitality of Jews surviving in the Diaspora; a demographic decline due to intermarriage in the Diaspora and “normalization” of large parts of Israel’s Jewish population; and a growing gap between an “Israeli nation” and diminishing Jewish communities around the world, leading to the crumbling of the Jewish people as a whole.

But the real long-term danger for the Jewish people is becoming irrelevant to a new humanity in the making. The future threats, in the absence of large-scale countermeasures, include: the geo-cultural decline of Western civilization resulting in the irrelevance of Jewish values and traditions to an Asian age; the absence of Jewish contributions to novel dilemmas facing humanity, such as regulation of science and technology and human enhancement ethics; the evaporation of Jewish creativity in science, technology and humanities; and an enforced solution to the Israeli-Palestinian conflict producing domestic violence, demoralization and social fragmentation in Israel, rendering it another small country of little distinction.

All these and related processes result in a large-scale exit from active Judaism, leaving Orthodox enclaves and a “normal,” rather mediocre, Israeli state constituting more of a relic than a significant shaper of the future of humanity.

Accordingly, a decline, or even a demise, of the Jewish people is a real long-term possibility. This outlook is reinforced by my reading of a forthcoming Jewish People Policy Institute book on factors indicating a rise and decline of the Jewish people by Shalom Salomon Wald.

Therefore, strenuous efforts to counteract this danger are a moral and real political imperative, requiring creative grand policies, together with novel structures and leadership, which cope both with short-term problems and assure, as far as humanly possible, a long-term significant future for the Jewish people, based on developing Judaism, as an active part of evolving humanity.

Tentative illustrations of main policy directions to be considered include the facilitation of Jewish ethical creativity significant for a new epoch of humanity; unique mending-the-world contributions based on Judaism; radical quantitative and qualitative upgrading of Jewish education with emphasis on creative elites; a Jewish demography policy, including pluralistic conversion; strengthening global cohesion among Jews, inter alia with an internet strategy; building strong bridges to Asian civilizations; movement toward a comprehensive and deep Arab-Israeli peace; and developing a new genre of leaders.

To consider and implement ideas of these dimensions requires an in-depth assessment of the dynamics of the Jewish people and its long-range alternative futures within rapidly changing humanity, and creative crafting of operational grand policies. What is required is high-quality thinking by the best Jewish minds based on professional analysis and synthesis by high-quality think tanks, as illustrated by JPPI.

But first, the main actors must recognize that “more of the same” is not enough to prevent decline. Instead, peak creative thinking and innovative, decisive action are a must, with an allocation of adequate resources to understanding and coping with long-range existential challenges.

Allocation of one percent of operational Jewish community expenses and ten percent of Jewish philanthropy to facing the long-term future seriously, by thinking and doing, is an essential minimum.

The author served as founding president of the Jewish People Policy Institute, but this op-ed presents his personal views.

About the Author
Yehezkel Dror is an Israel Prize winner and the founding president of the Jewish People Policy Institute (JPPI).
Comments