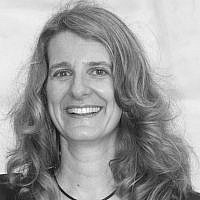 The Blogs
Shira Sebban
Apply for a Blog
Please note that the posts on The Blogs are contributed by third parties. The opinions, facts and any media content in them are presented solely by the authors, and neither The Times of Israel nor its partners assume any responsibility for them. Please contact us in case of abuse. In case of abuse,
Report this post.

As an Australian Jew, I am ashamed by the treatment of asylum seekers in both Australia and Israel. I watch bewildered as the two countries I love descend further in a harsh morass of immorality. Where has our humanity gone? Weren’t many of us, or our families, refugees once too?

On a trip to Israel in January, we found ourselves in the middle of the protest marches in Tel Aviv, involving thousands of African asylum seekers. Sadly, as an Australian, their treatment is only too familiar to me, being reminiscent of what has been happening to asylum seekers who attempt to arrive by boat to my home country – with one difference: Australia tends to lock up its “boat people”, who are not free to protest on the streets.

True, the Israeli government is now authorized to detain asylum seekers for up to a year without trial – it used to be three years until the Supreme Court intervened – in the remote Holot “Open” Detention Centre in the Negev. They can then be placed in indefinite detention until the State decides it’s safe to deport them.

Nevertheless, the Australian system is more severe still, a hardline change in official policy under the previous government in mid-2013 sending hapless boat people – including Syrians fleeing terror and torture – for “offshore processing” on Manus Island in Papua New Guinea (PNG) or on the Pacific island of Nauru, where they are detained seemingly indefinitely in harsh conditions with no hope of ever being settled in Australia. Just recently, Manus was in the spotlight again as violence flared within the Australian detention center, with an Iranian asylum seeker killed and dozens injured.

Both the Australian government and the opposition seem to agree that such harsh treatment is necessary to deter further boat arrivals. Moreover, since December, boats have been turned or even towed back to Indonesia “when it is safe to do so”. As a result, the Australian government proudly proclaims that it is well on the way to achieving its popular promise to “stop the boats” all together, with the added advantage, it boasts, of having slashed the number of asylum seekers reaching Indonesia too.

Yet, as pointed out by Indonesian presidential advisor and former long-time foreign minister, Dr Hassan Wirajuda, “who can guarantee that next year they will not try again because the root causes, like conflicts, war, poverty, push people to migrate”?

Isn’t that why our families chose to leave their birthplace too? What about our grandparents or parents, who left Eastern Europe or North Africa, in quest of a better life elsewhere?

While Australia has now seemingly succeeded in blocking the arrival of boatloads of mostly Afghan, Sri Lankan, Iranian, Pakistani or Iraqi asylum seekers, the Netanyahu Government’s erection of the US$400 million fence on the Egyptian border in 2012 has practically ended the entry of African asylum seekers who, since 2006, had been making the often harrowing trek from war-torn, dictatorial, famine-ridden Eritrea and Sudan.

Everyone knows that Israel was founded by and for refugees and that Australia too has benefited tremendously from their contribution. True, by world standards, numbers of asylum seekers to both countries are now low: Israel is contending with about 55,000 African asylum seekers – less than one percent of Israel’s population – while in 2012-13, just over 24,000 asylum seekers arrived in Australia by boat.

Contrast this with the more than 45 million people worldwide – an 18-year high – forcibly displaced due to persecution, conflict, violence and human rights abuses, including more than 15 million internationally displaced refugees and close to a million asylum seekers.

Overwhelmed by the sheer enormity of it all, it can seem easier to bury our heads in the sand. But haven’t we been taught that to save a single life is as if we had saved the entire world?

The Australian government claims to be acting out of kindness: unseaworthy boats have to be stopped to prevent unscrupulous people smugglers from taking advantage of the desperate, luring them to their deaths. After all, the statistics are stark: more than 1000 people have perished at sea, while the lives of more than 6000 children have been put at risk.

Moreover, what about the 13,750 protection visas – down from 20,000 last year — on offer to those whose places under Australia’s humanitarian programs have been “usurped” by “self-selecting asylum seekers”, those so-called “queue jumpers”, who, or so the argument goes, are really “economic migrants” with enough money to buy a place via people smugglers?

The Australian government’s military “Operation Sovereign Borders” brands such “maritime arrivals” as “illegal”, just as Prime Minister Benjamin Netanyahu accuses African asylum seekers of being “illegal infiltrators looking for work” – despite the fact that the 1951 UN Refugee Convention, to which Australia and Israel are both signatories, clearly recognizes the right to seek asylum from persecution no matter how you arrive (article 31).

Denied legal status, neither country allows those asylum seekers still able to live in the community, albeit provisionally, basic civil rights, such as the official right to work. Issued with only temporary visas and denied any chance of family reunion, a poverty-stricken underclass is being created under our eyes.

And yet, until now around 90 percent of boat people have ended up being recognized as refugees in Australia. In its latest cruel move, the Australian government has now decided that refugees who arrive by boat will no longer be eligible for a visa. Meanwhile, in Israel, only 0.2 percent of Eritrean and Sudanese asylum seekers have been granted refugee status, despite the fact that many more of their countrymen have been recognized as such elsewhere.

Being cruel to be kind? Or rather, out of sight, out of mind?

Of course we cannot expect every asylum seeker to end up in Israel, Australia, or another first world country. Moreover, one day, circumstances may even improve so they can return home. Meanwhile, however, there must be another option to indefinite prison or ultimate deportation for those requiring protection. Surely the ends never justify the means.

As Jews, we are constantly reminded not to mistreat strangers because we ourselves were strangers in the land of Egypt … and Poland … and Algeria … So why not work towards a humane resolution of this global crisis, which respects the inherent dignity of our fellow human beings and treats others as we would like to be treated ourselves?

About the Author
Shira is a Sydney-based writer and editor, who is passionate about exploring the challenges life throws at us through her writing. A former journalist with the Australian Jewish News, Shira previously taught French at the University of Queensland and worked in publishing. The mother of three sons, she also serves as vice-president on the board of Emanuel School, a pluralistic and egalitarian Jewish Day School.
Comments