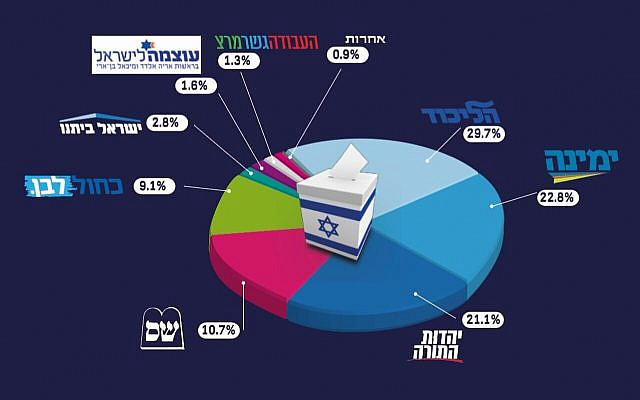 This is the busiest week in Israeli politics before election day. In the hours prior to midnight on Thursday — the deadline for the presentation of the lists competing for voter support — some pretenders for office will merge, others may break away from existing alliances, and still others may dissipate into thin air. In the process, leading personalities might withdraw from the fray, others might reemerge, and the race for position between those remaining will peak. The number of lists presented will, as in the past, far outnumber those that will eventually succeed in securing representation in the 24th Knesset — an indication both of the extreme fragmentation within Israeli society and the growing distaste with politicians and politics in general.

Significantly, very few of these lists possess any of the attributes associated with political parties in democratic countries. They lack developed internal institutions, a local presence, minimal resources and, above all, coherent ideologies and detailed programs for grappling with the multitude of challenges facing Israeli society today. Even the most seemingly resilient agglomerations have become so weakened that they are hardly capable of fulfilling the main role of political parties in functioning democracies: acting as the prime vehicle linking citizens to their government by providing representation for the diversity of groups and ideas in society.

Despite the multiplicity of electoral contestants it has sprouted recently, Israel is on the verge of becoming a no-party state. Too many instant lists, niche formations, personality-driven initiatives, change-oriented combinations, single-issue groups, and mood-oriented aggregations are very poor substitutes for robust political parties that serve to balance the abuse of power by those in office. There is a great difference between competitive electoral regimes (many with evident autocratic tendencies) and functioning democracies with robust political parties — especially in parliamentary multiparty systems such as Israel.

These elections offer an initial opportunity, through the prudent choices of aware citizens, to prevent further deterioration and begin the process of resurrecting the bond between all segments of the Israeli public and strong parties capable of representing their needs and aspirations. Failure to do so will have serious consequences for the country’s viability.

Israeli political parties have not always displayed so many striking weaknesses. For almost three decades since its creation (1949-1977), Israel was essentially a multiparty parliamentary democracy with a single dominant party (Mapai, later renamed the Alignment, or Ma’arach in Hebrew). During these formative years, political parties sought to provide for the needs of their members “from the cradle to the grave,” including health plans, newspapers, women’s organizations, youth groups, trade unions, and, in some cases, education, employment, housing, and burial arrangements. Although heavily centralized and lacking in internal democratic mechanisms, they did mold a set of working institutions and created a cadre of professional politicians.

This pattern was altered in the pivotal 1977 elections, when Menachem Begin and the Likud ended the Mapai hegemony and launched a period of two-party rule, with smaller political formations (including Dash, the National Religious Party, Shas, Agudat Israel, and some ethnic parties) holding the balance of power. Broad coalitions became the order of the day. Until the 1990s, however, despite a one-percent threshold, which accounted for the multiplicity of parties (ranging from a low of 10 to a high of 15), the bulk of the members of the Knesset represented large parties that commanded at least 25% of the electorate and, at times, over 40% of the vote.

At this juncture, the party configuration shifted once again. First, the main parties began to open up, holding internal elections and eventually primaries. Second, the threshold was raised to 1.5% on the eve of the 1992 elections, temporarily reducing the number of parties. Then, in 1996 and again in 1999, a system of direct elections for the prime minister allowed voters to cast two ballots, spiking the number of parties to 15 in 1999 and, more significantly, reducing their size. By the time the dual ballot was eliminated on the eve of the 2003 elections, there were only medium and small lists — as party instability soared and volatility grew, with the emergence of centrist alliances, which, with the notable exception of Yesh Atid, have proven to have very little lasting power (Shinui, Kadima, Blue-White).

This splintered party map has persisted to this very day. Despite the hike in the electoral threshold (to 2% in 2006 and then to 3.25% in 2015) that reduced the average number of parties, their average size did not increase. Indeed, during the past decade a two-bloc system (right vs. center-left) was instituted with the complete identification of the ultra-orthodox parties with the Netanyahu hegemony, overriding the possibility of fluidity in the construction of coalitions and effectively polarizing electoral politics. The last three rounds of elections entrenched this pattern, creating an almost inextricable stalemate.

In the process, however, something much more serious has transpired: most political parties have unraveled, replaced by, at best, ephemeral electoral alliances. With very few exceptions (the Labor party, Jewish Home, and Balad), internal democratization has ground to a halt, as no elections have been held for party leaders or for Knesset lists. With little representative turnover, the lists have calcified precisely when there is a need for rejuvenation. The continuous electoral cycles have bankrupted most parties, rendering their branches moribund, their structures in tatters and their activities severely curtailed.

Most lists — except Meretz, Gideon Saar’s New Hope, Hadash and Balad — have not published comprehensive platforms, their ideologies are assumed or unformed, and their plans of action — if they exist — are decidedly partial and short-sighted (vide Yamina’s program to combat the coronavirus or Yaron Zelekha’s economic recovery plan). Most new formations have highlighted the goals of leadership change (“just not Bibi”), while underlining the values of integrity, equality, accountability, and good government. They do not specify how they intend to promote these objectives or apply them to current exigencies. No number of splits, mergers, breakdowns, unifications or new initiatives appear to be capable of mending the inescapable precariousness of present political party constructs.

The implications of this enfeeblement are far more widespread than might appear at first glance. Weak electoral frameworks threaten the already withering connection between Israel’s citizenry and its leaders, thereby accelerating neo-authoritarian tendencies, exacerbating the centralization of power and intensifying its personalization. This is especially true today, as the traumatic experience of the pandemic and its socioeconomic ramifications has created an almost complete rift between the government and an increasingly distressed public.

According to the latest poll of the Israel Democracy Institute, support for the Knesset stands now at barely 21%; trust in political parties has plummeted to an all-time low of 14%. Popular dissatisfaction — ranging from flouting directives, bypassing restrictions, defying closures to growing demands — has been articulated in diverse ways. The protest movement of this period is far more comprehensive and varied than its 2011 incarnation. Efforts to give it expression in the political sphere (“The Democrats,” for one) have yet to penetrate voters’ consciousness, while the coopting of individual activists by various lists might mitigate the crucial engagement of key elements of civil society in the critical period ahead.

The loss of confidence in one of the most important guardrails of democratic life inevitably threatens state resilience. It makes it even more difficult to govern, to enforce policies or, for that matter, to prevent the consolidation of autonomous enclaves not subject to state oversight. This institutional dismantling is far more profound than the scramble over the form and composition of the electoral lists themselves.

The 2021 elections pose a very different set of challenges than did their 2019 and 2020 precursors. The emergence of anti-Netanyahu lists headed by Gideon Sa’ar and Naftali Bennett — along with the fragmentation of the center-left — unquestionably alters the political calculus. It also brings to a head the crisis of political representation in Israel. The lengthy process of rehabilitation will not occur overnight. It will, however, be advanced if citizens bear in mind that their ballot can be used not only to express immediate concerns, preferences, and aversions, but also to insist on the resuscitation of vital, interactive, party organs that are at the heart of democratic life.