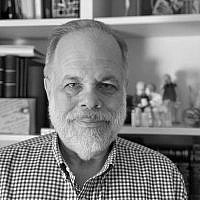 The Blogs
Kirk Zachary
Apply for a Blog
Advertisement
Please note that the posts on The Blogs are contributed by third parties. The opinions, facts and any media content in them are presented solely by the authors, and neither The Times of Israel nor its partners assume any responsibility for them. Please contact us in case of abuse. In case of abuse,
Report this post.

I grew up in the Coney Island Housing Projects in the 1950s and was Bar Mitzvah in 1964. My parents were not observant Jews but the Synagogue literally across the street was a Young Israel, an Orthodox Shul. The Rabbi there, Herschel Kurzrock, was a charismatic and inspiring teacher. He taught that Moses was a scribe to whom God dictated the Torah word for word. Had that Synagogue been Reform. I would have gone there, and this essay would be quite different. It was not until my early forties when I learned the Documentary Hypothesis, that the Torah was written by several different authors and redacted into the narrative that we read today. Personally, I would like to believe in Torah har Sinai, but I am not certain of it.  Regardless of the author, I study Torah to look for God’s instructions to live a meaningful life.

Rabbi Louis Finkelstein, former head of the Jewish Theological Seminary, said: “When I pray, I speak to God.  When I study Torah, God speaks to me.” God is there, in the Torah, but He moves around.  In the first two Books of the Torah, Genesis and Exodus, God is very immanent. As the narrative progresses, God slowly moves to transcendent.   Immanent is here defined as God being present in this world. Transcendent is here defined as God not being present in, but being beyond, this world.

Jewish mysticism, Kabbalah, posits that prior to Creation, God’s Infinite Being inhabited all the space that existed.  God was everywhere or Immanent. At the exact time of Creation, God contracted (shrinks) his Infinite Being to make space for all that He created.  God becomes Transcendent.  This shrinkage/contraction is known as Tzimtzum.  Whether the Torah was dictated by God to Moses or inspired by God to the Sages, the text remains the same. Interpreted simply or metaphorically, God’s arc in the narrative transits from close (immanent) to less close or withdrawn (transcendent).

In Genesis, God speaks directly to Adam (Genesis 3:17), and to Noah (Genesis 6:13). God appears in a vision to Abraham (Genesis 15: 1 and 17:1). God is immanent via His communication and His actions.  He acts through His own Divine agency.  God makes a covenant with Abraham in Genesis 17:1-27, “When Abram was 99 years old, the Lord appeared to Abram and said to him ‘I am El Shaddai.  Walk in My ways and be blameless.  I will establish My covenant between Me and you, and I will make you exceedingly numerous.’”  According to this covenant, God offers protection and land to Abraham and his descendants, but they must follow the path of God.  As a confirmation of this covenant, God then commanded Abraham and his future generations to perform the ritual of circumcision (brit milah). Clearly, God is front and center in the story and communicating directly with the protagonists in the narrative.  He is immanent and working through Divine Agency.

The Jewish people were closest to God during the time of Revelation at Mount Sinai. The entire Jewish nation was present at Mount Sinai, not just the leadership.  Revelation began in Exodus 19, on the morning of the third day of the Israelites’ encampment at the foot of Mount Sinai.  God descended onto the mountain accompanied by thunder, lightning, and thick clouds.  In Exodus 20, God spoke the “Ten Statements” to all the people. The Israelites were afraid to hear God’s voice directly and appealed to Moses to act as an intermediary.  Revelation brought the Jewish people pretty near to God both literally and metaphorically.  The narrative continues and in Exodus 24 God summons Moses and seventy elders to ascend Mount Sinai where “they saw the God of Israel…” (Exodus 24:10), and “they beheld God, and they ate and drank.” (Exodus 24:11).

Exodus 24 continues with God giving Moses “the stone tablets with the teachings and commandments which I have inscribed to instruct them.”  Exodus 24:18 closes out MIshpatim as “Moses went inside the cloud and ascended the mountain; and Moses remained on the mountain forty days and forty nights.”

The narrative continues in KI Tissa, Exodus 31:18, “When He finished speaking with him on Mount Sinai, He gave Moses two tablets of the Covenant, stone tablets inscribed by the finger of God.”

Exodus 32:1 states that “When the people saw that Moses was so long in coming down from the mountain, the people gathered against Aaron and said to him, “Come, make us a god who shall go before us, for that fellow Moses—the man who brought us from the land of Egypt—we do not know what has happened to him.”  Since Moses was “late” in coming down from Mount Sinai, the Israelites panicked and made the Golden Calf.  They created an idol made of gold and violated the second of the Ten Statements provoking God’s anger.

Moses asks God to forgive the Jewish people, rather than annihilate them, for their sins.   God’s anger persists and in Exodus 33:2, God withdraws His Divine Presence (the Shechinah): “I will send an Angel before you…But I will not go in your midst, since you are a stiff-necked people, lest I destroy you on the way.  When the people heard these harsh words, they went into mourning…”  In no uncertain terms, God has withdrawn His Immanence, the Divine Presence.

Sin and forgiveness are important Biblical themes.  At the time of the Golden Calf, Moses destroyed the first set of Tablets inscribed by God.  God withdrew his Shechinah.  Moses pleaded on behalf of the Israelites and God reinstated his covenant with the Jewish people.   In parsha Ki Tissa, Exodus 34:1, God said to Moses “Carve two tablets of stone like the first, and I will inscribe upon the tablets the words that were on the first tablets, which you shattered.”   A few lines later, the thirteen Divine Attributes of God are enumerated and form a central part of the High Holiday liturgy.  Parsha Ki Tissa closes with the renewal of the Covenant between God and the Jewish people. Forgiveness of the sins of the Jewish people and the renewal of their Covenant with God are the centrality of both this parsha and our Yom Kippur liturgy.

The last part of the book of Exodus, reiterates the construction of the Tabernacle.  A great deal of Torah space is given to the Tabernacle, indicating its importance.  Exodus 25:8 tells us why the Tabernacle is so vital; it is so that God can be immanent: “And let them make Me a sanctuary that I may dwell among them.”  God desires to be close to His people, living both with them and within them, in their hearts and minds.  The books of Genesis and Exodus are symmetrical bookends:  At the start of Genesis, God creates everything including a home for mankind.  At the end of Exodus, man builds a home for God.   Similarly, Genesis and Deuteronomy, the first and last books of the Torah, complement each other.  In Genesis, God is immanent in the Garden of Eden, while in Deuteronomy the Israelites become immanent as they enter the Promised Land.

The Jewish people go from the peaks of closeness to God (Immanence) to the depths of distance from God (His withdrawal).  God withdraws his Shechinah from this world.  Is this withdrawal permanent or temporary?  As in a marriage, the Jewish people and God go through arguments and makeups, break ups and reconciliations.  Words and actions can be forgiven…but not always forgotten. The mutual love must endure. A potter’s vase can break and be glued back together, but it is never the same.  There are scars and seams which may make it more interesting, but it is not as it was when the potter created it.  Such is our relationship with God: repaired and intact, but sometimes stressed.

While we are alive, this writer believes that man’s talents and skills are on loan to us from God.  Man’s accomplishments are based on a partnership between man and God, a melding of Divine and Human Agencies.  The Tabernacle is meant to bring God into our world, “so that He can dwell among us,” in the Tabernacle that each of us creates within our hearts.  When we each contract our own hubris, we can make space for the Divine to be present in each of us.

About the Author
Kirk Zachary, MD has been a practicing physician in NYC for over 40 years. He has a love for Torah and for his Jewish heritage.