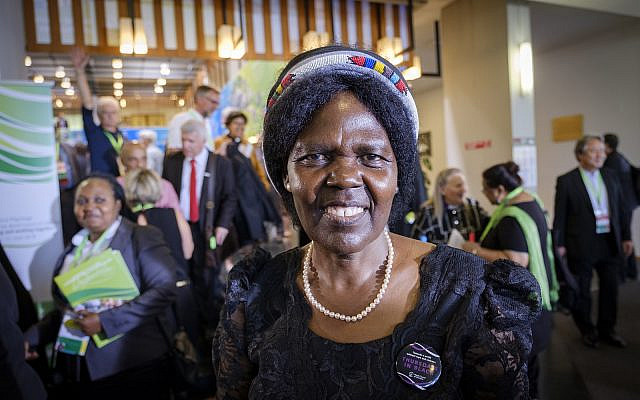 Dr Agnes Abuom at a 2018 meeting at the WCC's headquarters in Geneva. Abuom, the moderator of the WCC's Central Committee spoke about the persecution of Christians in Africa, the Middle East, and Asia during her opening remarks to the committee on June 23, 2021. (WCC Photo taken by Magnus Aronson and used with permission from WCC.)

Like a lot of institutions, the World Council of Churches has adapted to a global lockdown on travel prompted by the COVID-19 pandemic. Staffers for the organization, which serves as an umbrella body for approximately 350 churches comprising half a billion members worldwide, are currently hosting a meeting of its Central Committee via the internet, with delegates speaking to one another via their computers in their home countries.

Only a few reporters were at the online orientation for journalists organized by WCC staffers on Tuesday morning, but the meeting itself is an important event. WCC staffers and elected leaders will deny it to high heaven, but an overwhelming amount of evidence demonstrates that the organization has been hijacked by anti-Israel activists in the Middle East, who use the WCC’s status as a “peacemaking” organization to demonize the Jewish state, hinder Israel’s efforts to defend the lives of its citizens, and whitewash violence and acts of corruption perpetrated by Palestinian elites in the Gaza Strip and the West Bank.

This has been done largely at the insistence of Palestinian Christians in the Holy Land and the Middle East Council of Churches, an organization whose member churches are located in Muslim-majority countries in the Middle East.  Another group that has contributed to this sad state of affairs is comprised of Church leaders in South Africa who use hostility toward Israel to distract from the problems their country faces in its post-apartheid era.

The WCC’s animus toward Israel has been well documented. It was highlighted in a dramatic fashion when Rabbi David Sandmel, the ADL’s interfaith director, spoke to the WCC’s Central Committee in 2016, condemning the organization for failing to confront the hostility and violence directed at Israel by groups such as Hezbollah and Hamas. “I have to wonder to what extent the persistence of antisemitism predetermines and distorts the WCC’s approach to this conflict. I have to wonder how much the presence of antisemitism contributes to global antisemitism, which has real world implications for me and my people,” Sandmel declared.

The WCC’s anti-Israel animus, which has been a problem since the organization’s founding in 1948, might hit a brick wall in the post-COVID-19 world, however.

It will hit a brick wall when and if Christians from other parts of the Global South insist that the WCC end its obsession with Israel and start addressing human rights problems in a more honest and responsible manner. Demonizing the Jewish state might give attendees of the Assembly in Germany feelings of unity for a brief time, but it will not improve the lives of the 500 million members of WCC churches back home.

Here are a few questions whose answers will reveal whether the WCC will abandon its obsession with Israel in time for the upcoming Assembly.

Will the WCC be sending a delegation to the upcoming anti-racism conference organized by the UN scheduled to take place in Durban in September, 2021? If yes, what role will these delegates play?

As most readers of the Times of Israel know, the UN antiracism conference that took place in 2001 devolved, with the help of local activists in South Africa, into a maelstrom of Jew-hatred dressed up as “peace” and “justice” activism. To make matters worse, the WCC’s delegation to the Durban Conference in 2001 obstructed efforts to condemn the role that false allegations against Israel contributed to violence against Jews throughout the world.

While the UN’s Durban conference demonized Israel, it ignored, with the acquiescence of the WCC, violence against Christians perpetrated in Muslim-majority countries. “Discrimination against ethnic groups within the Arab and Muslim world wasn’t even on the agenda,” Walid Phares wrote in 2010.

This brings us to our next question.

Will the WCC address Muslim violence against Christians in Muslim-majority countries throughout the world at its next Assembly? Will it establish bureaucracies dedicated to dealing with this violence through theological analysis and on-the-ground activism?

The WCC currently has two organizations established to draw attention to the misdeeds of the Jewish state. The first is the Palestinian Israel Ecumenical Forum, which played a significant role in convincing churches in the West to embrace the anti-Israel Boycott, Divestment and Sanctions campaign, primarily through its support for the Kairos Palestine Document.

The second WCC organization that promotes anti-Israel narrative and polemic is the Ecumenical Accompaniment Program in Palestine and Israel (EAPPI). This organization brings activists into the Holy Land to gather images and narratives of Jews (but not Arabs) behaving badly and share these with audiences upon their return home.

Ostensibly, the goal is to promote peace, but in fact, these organizations problematize Jewish self-defense. The WCC does this on a theological and on an ideological level.

By way of comparison, the WCC has invested very little into problematizing Muslim violence against Christians and other religious minorities in Muslim-majority countries.

The organization has worked assiduously to engage in interfaith dialogue with leaders from Al Azhar University in Egypt, but when it comes time for the WCC to condemn jihadist violence in theological terms, it doesn’t happen. Using loaded theological terms to condemn violence? That’s reserved for Israel, not its adversaries in the Middle East.

Maybe it’s unreasonable to expect the WCC to embrace pro-Christian activism with the same ardor it has embraced anti-Israel activism, but there is reason to think that it will at least start to confront anti-Christian violence in the Middle East, North Africa, and Asia.

During her opening address to the Central Committee, moderator Dr. Agnes Abuom from  the Anglican Church in Kenya spoke about anti-Jewish and anti-Muslim violence and then asked pointedly, “How about our own family? The persecution of Christians continues in my own continent. We’ve seen what continues to happen in Nigeria with Boko Haram kidnapping young people, particularly Christians.”

Abuom also went on to condemn violence against Christians in Kenya and Asia. Maybe Abuom’s comments about this reality are a harbinger of a more honest appraisal of the persecution of Christians by Muslims in the Global South.

Will the WCC take responsibility for the actions of its activists and employees in Jerusalem? Will holding WCC staffers and volunteers accountable become part of the organization’s strategic plan approved and extended by the Central Committee?

During his opening remarks, WCC Interim General Secretary Ioan Sauca said the organization worked to “reshape, consolidate and strengthen” its “Jerusalem-based activities.” He was speaking in part about the previously mentioned Ecumenical Accompaniment Program and Palestinian and Israel (EAPPI).

This organization is in bad need of oversight. The WCC has stated that volunteers associated with this organization do not engage in politics, when in fact, they have done so, protesting against Israeli policy in Jerusalem. The WCC says EAPPI volunteers do not associate with Palestinian extremists, but they have accompanied one Palestinian extremist, a spokesperson from the PFLP terrorist organization, as he harassed Israelis living in the West Bank.

And one WCC staffer, Yusef Daher, who works at the Jerusalem Inter-Church Center, which advises EAPPI, has been particularly irresponsible in his online polemics. For a summary of these concerns, read this article here.

The Central Committee meeting currently taking place and the WCC Assembly scheduled to take place in Germany next year represent real opportunities for the organization to address its policies in the Holy Land and disavow its obsession with the Jewish state. Will these opportunities be seized, or wasted?