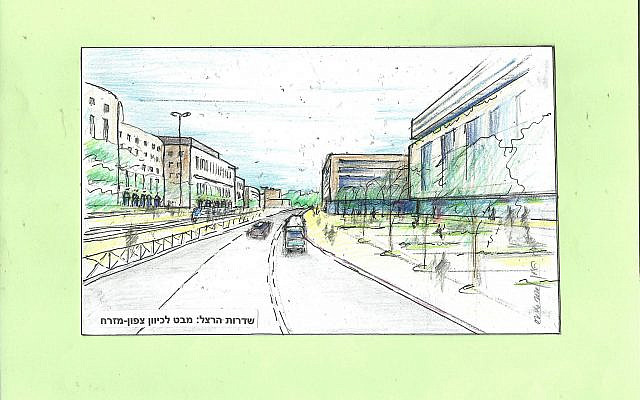 With more cars being sold today than ever before, the inevitable traffic jams, wasteful of time and energy, causing anxiety, stress and alienation, are daily getting worse. But the negative impacts of the car go far beyond air and noise pollution, accidents, and ever increasing travel time — a growing gap between the speed of the vehicles as advertised and the day-to-day reality.

What is not as apparent as technological and economic considerations is that transit systems have sociological significance. Pedestrians pay the heaviest price, their view of the city limited, monotonous, and uneventful. Sidewalks and roadways are often indistinguishable. One reason so many Israelis cross the Mediterranean is to enjoy leisurely pedestrian activities in Europe’s old cities. How might we recapture the rich pedestrian urban experience here?

Great potential for improving the urban pedestrian’s lot exists at the transfer points between modes of transport — between private automobiles and public transportation. These intermodal interfaces, properly developed, can become places of social concourse with “park and ride” garages close by to store vacant vehicles.

A station of any intensity and frequency of use that functions as a transportation exchange can be transformed into a community place able to support a variety of facilities. Passengers may then become relaxed pedestrians and enjoy social interaction as a daily experience once more. Ordered in this way our transit system would bring back to daily life the vital community ingredients of human intercourse, thereby increasing social cohesiveness.

To cite but one example, an excellent opportunity for developing such an exchange point exists in Jerusalem on the site of the fenced soccer field opposite Herzl Boulevard’s Yefe Nof light-rail station and 18 bus lines. The existing underground water reservoir would be relocated. Yad Sarah’s national headquarters are across the street, Shaarei Zedek Medical Center to the southwest, the Ziv High School just next door.

Proposed is creating a welcoming green public square well-defined by two buildings of significant volume, apartments, offices, and public facilities on their upper floors, commercial arcades with shops, cafés, and restaurants at street level. These buildings would address the boulevard and the square to form a safe, pleasant environment that would be easily accessible from the park and ride garage below.

Israel has always had an exaggerated reliance on urban highways whose capacity is soon filled so that there is an almost immediate demand for more. There are never fewer roads; our road engineers are never unemployed. Thanks to them, we have endlessly expanding asphalt expanses destructive of the delicate urban fabric. For economic reasons, new roads are often sited on parks and public open space. Route 16 presently under construction in Jerusalem, will traverse the Jerusalem Forest, until now protected by a National Town Planning Scheme. There is a growing consensus today among urban planners that building more highways will not solve traffic congestion. Blind faith in mobility can prove disastrous for the community at large.

Clearly, a far more inclusive approach to the problem must be adopted, taking into account not just automobiles and other vehicles, but an array of closely interrelated physical, economic, and social elements that need to be planned in harmony – the specific qualities of the site, its capacity for economic growth at acceptable levels, and social human needs. Comprehensive, long-range planning on the basis of land capacity in the broadest sense rather than simplistic car sale demand projections, holds the key to a better future.

At a time when Jerusalem’s transportation system is being markedly extended, crucial is recognizing that the transportation and movement problem is not just technological and economic, but has the most serious social and environmental implications that till now have been largely ignored and need urgently to be better understood.