The Blogs
Ben Salfield
International classical musician, antisemitism campaigner and political commentator
Apply for a Blog
Please note that the posts on The Blogs are contributed by third parties. The opinions, facts and any media content in them are presented solely by the authors, and neither The Times of Israel nor its partners assume any responsibility for them. Please contact us in case of abuse. In case of abuse,
Report this post. 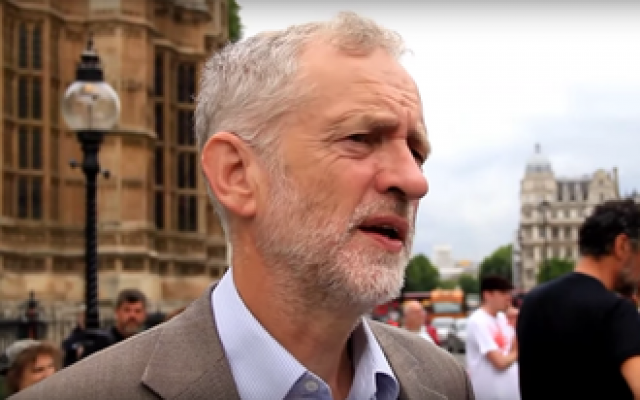 Following Labour’s heavy defeat in the UK General Election, the left must redefine its relationship with Israel and the Jewish People in order to regain the trust of the electorate.

On December 12, 2019, UK voters overwhelmingly rejected the prospect of a radical left-wing Labour government led by Jeremy Corbyn in favour of Boris Johnson’s Conservatives. As someone who had campaigned in favour of Britain leaving the EU since 1997, I was personally delighted with the result of what was dubbed “The Brexit Election”; yet I do not believe that Brexit and Corbyn’s failure to get off the fence about the issue were the only things to decide an election that was exceptional for its unpleasant and divisive nature.

Even the self-proclaimed Marxist Shadow Chancellor John McDonnell’s sophistry only really caused eye-rolling among the few, and certainly not among the many. Indeed, policies such as loads of free stuff and a four-day working week seem to have been quite popular among the youngest, least cynical voters who were supposed to propel Corbyn into Number 10.

In the aftermath of the result, public interest in Labour has been temporarily confined to their leadership election and to the direction in which the winner will take the party. Many traditional Labour voters are rightly worried that the hard left will continue to dominate – which might leave the Conservatives in power for the next decade.

The General Election demonstrated that average people simply did not trust Labour to give security and prosperity to the United Kingdom. In particular, the Labour leadership’s history of sympathy for a number of terrorist groups from the IRA to Hamas and Hezbollah, and the antisemitism that has overshadowed Labour at every turn since Corbyn took charge, have turned ordinary working class people – supposedly the party’s core voters – off Labour.

By and large, the UK pulls together in times of crisis, evoking the “spirit of the Blitz” whenever terrorists or fate conspire try to disrupt our way of life. We have seen our fair share of bullets and bombs over the last 45 years, from the IRA and various Islamic fundamentalist groups – so Corbyn’s “friends” do not sit comfortably with the Bloggs family in Average Avenue. The UK has one of the most tolerant societies in Europe, and the overt antisemitism emanating from some sections of Labour alienated not only Jews, but also their friends, work colleagues and other associates. A Delta survey in the week before the poll showed that 39% of the general public considered Corbyn and “some elements” of the Labour Party to be antisemitic. That is more than enough to lose an election in the UK.

Antisemitism is nothing new in hard-left politics, even though it is traditionally considered a problem of the right. Historically, Jews were barred from many jobs, but made enough of a success in, for example, banking, to inspire a multitude of antisemitic tropes about Jewish political influence, due to “their control of world banking and business”. In the late C19, this spurred on some of the emerging anti-capitalists to view antisemitism in a positive light, as a form of progressive socialism. These fledgling socialists later considered the idea of a Jewish homeland to be an anti-integrationist ideal that placed Israel and the Jews on one side, and the rest of the world on the other, even bringing into question Jewish loyalty to their country of birth. In the eyes of the modern exponents of this form of socialism, many of whom are supporters of Corbyn’s ideals and ideas, the State of Israel is run by Jews, and works hand-in-hand with exploitative imperialist and colonialist capitalists. Their dislike of Israel and Jews goes hand-in-hand. Crude, simplistic and distasteful, I know, but then hard left politics has often been thus.

The current Labour hierarchy dangerously believes that the enemy of their enemy is their friend. So there are nods of approval to groups whose avowed aims are violent, anti-Israel, and whose oppression of women, non-Muslims and minority groups (such as LGBTQ+ people) is unacceptable to the truly civilised. This is a huge contradiction for a political party whose motivations are supposed to be equality, fairness and standing up for the underdog. It also puts off the very people Labour need to appeal to.

Yet, I believe that to consider UK antisemitism in the radical left as simply an overlap of anti-Zionism is at best simplistic, and at worst a red herring. Many people whom the International Holocaust Remembrance Alliance would consider to be antisemitic will claim they are simply anti Israel and that their stance versus their perceived stance is a Jewish-influenced conflation. In fact, the exact opposite is true: many left wing anti-Zionists are in fact ill-educated, ill-informed antisemites masquerading as political intelligentsia.

This is no “chicken or egg” scenario: antisemitism came along well before anti-Zionism. Internal documents from Labour’s disciplinary department, leaked by the Sunday Times, show that of the 130 outstanding complaints regarding antisemitism (as of last October), only a few targeted Israel as opposed to the Jews. Unpleasant but rather passé comments included calling for “the extermination of the Jews” and referring to Jews as “bent nose manipulative liars” (sic). The reaction of Labour’s internal disciplinary department so far has done little to put such people off: only half of complaints in the year up to October 2019 led to sanctions, and some antisemites were simply told they would have to attend internal “diversity training” – even though Labour has yet to set up such a programme. No wonder the Equality and Human Rights Commission is currently investigating the Labour Party!

Labour’s very existence as a serious political force in the medium term depends on the decisions its next leader makes by the end of this year. Whilst I disliked his politics, Tony Blair was a charismatic, strong leader who dealt with the far left, recognised the need for the party to modernise, and brought Labour back into power from 1997 – 2010. Labour now needs a new Blair – someone who will want to deal with, rather than denigrate, the only real democracy in the Middle East; who will crack down on antisemites and show them there is no place within the party for their crackpot, divisive hatred; who does not sit on the fence about the big issues of the day; and who has a realistic, socially and economically costed, agenda. There is simply no room in the mainstream for political parties whose views are so influenced by medieval attitudes.

Unfortunately, none of the remaining contenders for the poisoned chalice looks anything like the dream ticket, and I do not believe that either Sir Keir Starmer or Rebecca Long-Bailey, the two favourites, has the desire or ability to unite their party around change – at least not to the extent that it is needed. This is a big problem, not just for Labour but for the whole of the UK: where the main opposition party is weak and mistrusted, and where government is not adequately questioned about its policies and properly held to account for its actions, the very future of democracy is at stake.

About the Author
Leading international lutenist, teacher, music editor, festival director and broadcaster Ben Salfield was born in 1971. A former election candidate and a current member of the UK Conservative Party, he is also known as a political commentator and a campaigner against antisemitism, whose speeches have been lauded for their insightful commentary. Ben Salfield lives in Cornwall, UK, with his six cats.
Related Topics
Related Posts
Comments