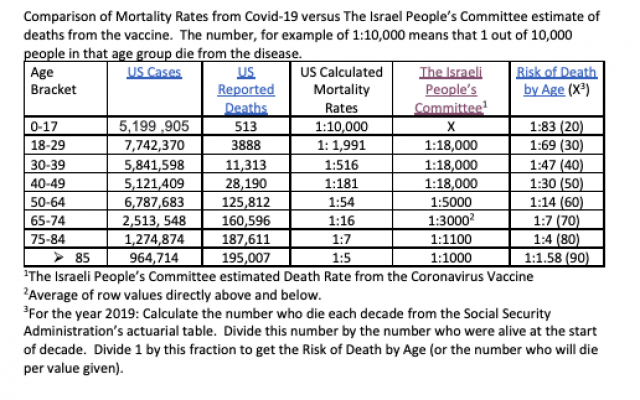 Calculated Mortality Rates
Oh, how it’s possible to mislead with numbers.
I remember my cousin Howie once telling me that the determination of a first down in football is an exact, yet imprecise assessment of whether the football has gone 10 yards. True, the chains measure 10 yards, but the placement of the ball is arbitrarily dependent on where the referee determines it touches the ground.
Numbers can be rounded to the nearest decimal point, or they can be integer numbers. Yet, numbers do not by themselves have any meaning. They must have context.

The Israeli People`s Committee website and reports give the appearance of authority. The Committee has composed the Report of Adverse Events Related to the Corona Vaccine, May 2021 and concluded that: “Never has a vaccine injured so many.”

In my opinion: this document misleads, and has the potential to cause harm to those who take its conclusions at face value.

According to the authors’ assessment, “it is possible to estimate that the number of deaths in Israel, which have occurred in proximity after the vaccination… at about 1600-1700 people.” Furthermore, based on direct reports to their website, they composed a table that displays both deaths and other serious or non-lethal side effects attributed to the Coronavirus vaccine.

They write that “We found a statistically significant correlation between the daily mortality data and the daily vaccine data during January-March 2021.”  However, they do not note, even once, that the mortality occurred within the context of the (word) Pandemic (0/0 citations within). They might just have well as attributed the increase in mortality to bad weather, or rising monthly temperatures. Correlation is not causation.

Their “2016 additional reports refer to a wide and multi-system range of adverse events that occurred in proximity after vaccination [detailed in Table 6]”, without the context of how many so-called adverse events would occur due to other causes. For instance, out of a set of 1000 vaccinated people, 100 report that they stubbed their toe after receiving the shot. However, out of 1000 unvaccinated people, 98 also stubbed their toe. A statistical test would show that the two sets are not distinguishable, meaning that toe stubbing cannot be attributed to the vaccine. In contrast, we know that the shot does cause a sore arm in some percentage of people, which is much higher than the percentage of people who typically have sore arms, for example, from playing tennis.

In fact, by composing a table (below) for comparison based on United States data of Coronavirus-19 related cases, versus number of Coronavirus related deaths, and presenting those numbers against those of the committee, one can conclude that the vaccine appears eminently safe (besides being effective). For instance, based on data from “Statista,” the mortality rate in all ages from the virus is much higher than from The Israeli People’s Committee. Based on the United States Social Security Administration’s Actuarial Table from 2019, the risk of death in any 10 year period from natural (or other causes) is much, much higher than the risk of death from the Vaccine. This means that to attribute all reported deaths due to the vaccine in any 10-day period ignores all other reasons for dying, which are (unfortunately) much more prevalent.

Moreover, even if we accept that the administration of 15+ million doses was associated with 1650 deaths, this is far lower than the almost 8000 deaths due to the virus. In fact, if one were to normalize the populations that have received one dose (6.2 million have received at least one dose while 1.3 million have been so-far infected), then (all else equal), Israel would be facing almost 40,000 deaths without the vaccine.
It’s appropriate to concluded that never has a published document been so misleading or potentially dangerous to those who refrain from being vaccinated because of it.
About the Author
Dr. Barry Lynn has a PhD in Environmental and Atmospheric Sciences. He has an undergraduate degree in Biology. He is a researcher/lecturer at the Hebrew University of Jerusalem, and is the CTO of Weather It Is, LTD, a weather forecasting and consulting company.
Related Topics
Related Posts
Comments