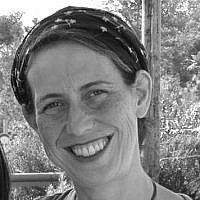 So much of Jewish ritual happens on the communal stage. Our rituals and prayers are done in public, as are most of our celebrations. There are any number of things that cannot be done without a minyan. And we invest much trust and power in the hands of the rabbinic elite to guide, to protect, to set the standard. And that is one of the reasons that the Barry Freundel story hit so hard—because like too many others in the news recently, he abused the very power and trust invested in him.

But more than his abuse of power, this story hit hard because it happened in the mikveh. Mikveh has always served as a code word for intimacy in the religious community. It isn’t something talked about in great detail. It isn’t even something talked about loudly. It is private and it is intimate. Each person is responsible for him- or herself, and stripped of clothing and the external signs that protect and separate us, mikveh has the power to legitimize and elevate our most private and vulnerable needs.

Mikveh is the antithesis to grand public ritual. It is a ritual that is performed alone, in one of the few times where we stand truly exposed as spiritual individuals. And mikveh can reveal the most intimate and private pain: infertility, miscarriage or abuse, a woman who doesn’t feel loved by her husband or doesn’t want sexual intimacy. The waters embrace; they are welcoming and forgiving. They have the power to transform; embracing a new convert, reuniting husband and wife, and (with all physical barriers removed) linking women to themselves and the Almighty. Mikveh is a place where vulnerability and sanctity are tied up with one another, and ultimately, with the power and place of women in the community.

The hilul hakodesh (desecration of holiness) resulting from the actions of a rabbi in the sacred space of the mikveh has exposed many raw nerves and made us all feel more vulnerable. If there is a lesson to be learned from this incident, perhaps it is that time has come to talk more openly, and while preserving modesty, have real discussion in a religious context about all the vulnerabilities for which mikveh allows. It is time to speak about how to enhance our sexuality and make it part of our religious world, to own the problems we face, and give them a place in which to be expressed. To recognize the power each of us has as individuals within a community, and to explore women’s space within the community and with its rituals.

A good mikveh can reinvigorate aspects of community life. It can be a source of spiritual strength and meaningful personal experience. But in order to achieve those goals, we must relate to the place of women in the structure of control over mikveh. We must also reconsider the role of the mikveh attendant in the experience and ensure that they no longer see their role as confined to “checking women for stray hairs”. We have to shift how they see themselves and revamp how we train these women, so they can be community resources of a much broader nature, who understand larger issues and know how to refer women for help. We have to allow for the mikveh to specifically address the types of problems and issues that are not appropriate for the communal stage, but are not something we should repress.

The shockwaves that have gone through our international community in the past few weeks should spur us to action about how we retain the sanctity of the mikveh and allow it to inform us as Jews and as sexual individuals.

As founding director of The Eden Center I spend my days and nights thinking about how to improve the mikveh and make it a more welcoming place for every woman. The Eden Center works to bring light to this arena and to educate those who serve women and women themselves.

Eden has established a pioneering program that combines sensitivity training with teaching mikveh attendants about a range of issues including abuse, postpartum depression, infertility, miscarriage and how to refer women for help, in the effort to highlight for them the incredible power of mikveh to heal, to hold hopes and pain and be a locus of strength which can connect Jewish women to communal resources. We have worked to open the discussion about ownership: thinking about who should have ownership over a woman’s individual immersion (she, the attendant, other religious authorities [male or female]); and who should be at the helm in decision making. And we have begun to train kallah teachers (and soon a new cadre of hatan teachers) about sexuality and abuse, in order to contextualize mikveh within our broader discussion of these issues. But there is much more that can be done.

Mikvah is a communal institution and a female institution. And we have to empower women to take ownership, and to make this institution one that speaks to our needs as modern, religious individuals.

As the shock and anger over this most recent incident passes, let us take the opportunity to think forward about how we can frame the space of the mikveh so as to preserve its modesty but empower laypeople to engage fully with the mikveh as a wellspring for strength. Let us remember that where vulnerability and sanctity meet is precisely where imbalances of power lend themselves to abuse. But with the empowerment of women in the community, the mikveh has immense potential to be an even more valuable resource both for the individual, and for the community-at-large.

About the Author
Dr. Naomi Marmon Grumet is the Founder and Director of The Eden Center in Jerusalem, which works to improve the experience of mikveh and through it to promote the spiritual, emotional and physical health of Jewish women and families. She developed an extensive Training Program for Mikveh Attendants, providing resources for positive communication, and women's lifecycle and crisis moments. She received her PhD in Sociology from Bar Ilan. Naomi lives in Jerusalem with her husband and three children.
Related Topics
Related Posts
Naomi Marmon Grumet
Comments