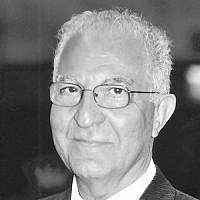 The Blogs
Zvi Gabay
Apply for a Blog
Advertisement
Please note that the posts on The Blogs are contributed by third parties. The opinions, facts and any media content in them are presented solely by the authors, and neither The Times of Israel nor its partners assume any responsibility for them. Please contact us in case of abuse. In case of abuse,
Report this post.

Since the onset of the Spring of Arab nations on December 17, 2010, when Mohamed Bouazizi, a young Tunisian, set himself on fire to protest the revocation of his merchant’s license, the Arab World has been experiencing sweeping changes, which have been ongoing for more than 30 months and are expected to continue for much longer. Despite the promising outset of this spring, democracy and social justice are yet to be achieved. An open eyed look at political developments and careful attention to what Arab intellectuals are saying reveals that Arab Nations are far from ready to accept Western culture or Israel.

For the first time in the Arab world, the barrier of fear and blind obedience to leadership was breached. Peoples rose up against oppressive rulers – Zine El-Abidine Ben Ali in Tunisia; Hosni Mubarak in Egypt; Muammar Gaddafi in Libya; and Ali Abdallah Saleh in Yemen – and removed them from power. Since then there has been no stability. In Syria more than100 thousand have been massacred and the number of refugees fleeing for their lives from the bloody fighting has reached more than a million and a half. In Iraq, there are killings on every corner and the war between the Sunnis and Shiites is incessant. In Libya, there are constant factional rivalry and tribal assassinations. In Yemen, walking down a city street can be fatal.

In Egypt, Oum el Dounya — the glory of the world, the initiators of the uprising,who toppled President Mubarak, forced the army leaders to organize a free election. “Freedom before bread!” they chanted in el Tahrir Square. To their amazement, the army joined them in singing the popular song “I love the free life,” and organized a free election. However to their great disappointment the result of the election was an “Islamic Winter”: the majority of the voters (72%) voted for the Islamic Block-Muslim Brotherhood and Salafists, and only twenty percent voted for the Liberals. The Muslim Brotherhood is currently in power and is fighting the liberals, the initiators of the uprising. They are destroying all remnants of Western culture, including the songs of the famous singers Oum Kalthoum and Mohamed Abdul Wahab, as well as Egypt’s venerable film industry, and are seeking to form a religious regime. The Salafi Islamic movement wants to destroy the Pyramids and the Sphinx since they are seen as idol worship, and contrary to the foundations of Islam.

The chaos that has erupted in the Arab world prompted the Egyptian poet Ahmed Fouad Nagm to lament last November that “the Arab Nation is not worthy of revolutionary slogans, its spring has turned ridiculous, it has buried its honor under the dust while is still breathing.” Another Egyptian intellectual,Tariq Hagi claimed that Arab society was constitutionally incapable of tolerating a culture of compromise. The individual’s loyalty, he said, is to the tribe and to the family.

Tribalism has returned to the region. It is currently governing the states established by the arbitrary decisions of Western Imperialism during the twentieth century. The ideologies of Pan-Arabism, Nasserim and Nationalism no longer exist. During the past two years there have been no freedom and democracy for Arabs anywhere in the Middle East except for Israel.

The Arabs did not exploit their political independence to unite and build stable economies. They didn’t utilize their vast regions, raging rivers and abundant natural treasures to enrich their countries and improve the standard of living. Instead, they used their wealth to form enormous armies for the purposes of invading their neighbors and exerting military might over their own citizens.

Simultaneously, Arab leaders exposed their intolerance for ethnic and religious minorities that lived in their countries. They oppressed approximately a million Jews that had lived in their countries for thousands of years and finally expelled them and ,forced them to leave behind their personal and communal property. At the same time, they prevented the Arab refugees from Palestine from resettling in their vast lands and developing and enriching their countries. Since the Oslo Accords in 1993, The Palestinians have not managed to form a unified political entity (there is a definite political separation between Gaza and Ramallah), nor build their economies, despite generous financial support from Western countries. The Palestinians continue to blame their failure to develop and improve their lives on the Israeli “occupation”, which they brought upon themselves by waging wars against Israel. The Arabs used the “Cold War” and the conflict between the Soviet block and the Western block to stock up their arsenals. The West and the Russians provided them with modern weapons, which they did not need except to glorify their tribalism based on the “dagger and the sword.”

The Arab intellectuals craved political, social and cultural reforms during the years of the “Arab Spring.” Now they gravely witness what is taking place in the Arab countries, as the “Arab Spring” transformed into the “Islamic Winter.” In contrast to the intellectual’s aspirations, the extremists have gained power. The Iraqi poet Abd el Qader el Janabi expressed his deep disappointment in a poem: “the long sought Spring has been hit by a cold blow… History has raped our war…. We see behind us only waves…”.

Intellectuals are searching for the cause of the crisis in the Arab world. The Saudi publicist Abd el Latif Mulhim argued on October 6, 2012 (the anniversary of the Yom Kippur war of 1973) that: “Israel is not the enemy of the Arabs but rather dictatorship, ignorance, neglect and corruption [is].” Adonis, the Syrian poet believes that most Arabs do not consider Israel as an enemy. Although the Arab-Israeli conflict has claimed a high price, Mulhim believes that the real enemies of the Arabs, are corruption, lack of education, lack of respect for human life and its health and the lack of freedom and respect for women’s rights. He believes, like the well-known poet, Nizar Qabbani, who, in his poem “The Actors” accused Arab dictators of turning their rule “into a type of prostitution” and “Palestine to a hen whose precious eggs” they eat.

Surprisingly, the brave cries of the poets in the Arab countries brought about the writing of bold poetry by women who claimed that as long as women are bound by the chains of traditions and are treated as inferior, they cannot contribute to the development of their society. The Kuwaiti Poetess Suad el Sabbah expressed the distress of Arab women in her poem “A Woman in a Bottle Neck”: “I want to breath clean air …I want a place on earth…I want to be free from all…”

Recently in the website Eilaf, the Iraqi publicist Basel Hussien, described the Arab nation as a nation without a future, without a conscience, intelligence or leadership. A combination of a culture of hate together with a desire to spill blood formed in the Middle East. Due to this terrible reality, the chances of the Arab World entering the 21st century are not great.

Today Arab states are focusing inward and struggling vigorously to establish their nationalism and social character, while Shiite Iran with its long arm -the terrorist organization-Hezbollah, is trying to expand its influence in the region.Unfortunately the spring of Arab nations,which led to a regime change in many regimes, has not promoted the acceptance of Israel. Therefore, one must look at the region that surrounds us with open eyes and avoid any involvement in what is taking place in the Arab states. Since our involvement will only be used by hostile factions as a way to distract attention from the internal problems. Rather we must locate moderate factions within the Arab world, in order to maintain a stable geopolitical region.